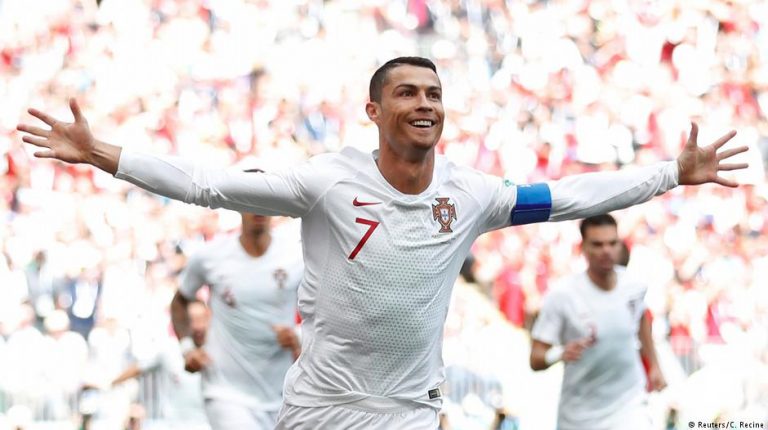 Cristiano Ronaldo on Wednesday broke the record for the most international goals scored by a European player as Portugal edged past Morocco, who become the first side to be knocked out of the World Cup 2018.

Ronaldo’s fourth goal of Russia 2018, following his hat trick in the 3-3 draw with Spain, was his 85th international goal, taking him beyond Hungarian Ferenc Puskas’s European record, with only Iran’s Ali Daei ahead of him on 109.

Morocco, in their first finals appearance in 20 years, regrouped well after conceding early and showed some real positivity in attack with Hakim Ziyech and Nordin Amrabat seeing plenty of the ball. However, Portugal generally defended well to limit the danger.

Amrabat was furious at not being awarded a penalty after wrestling with Raphael Guerreiro. Coach Herve Renard was also ticked off for the new offence of gesticulating to demand a video assistant referee (VAR) review of the incident, which left Amrabat with rugby-style stud-rake marks on his stomach.

Morocco were the dominant side in the second half and Portugal were grateful to goalkeeper Rui Patricio for a fantastic diving low save to touch clear Younes Belhanda’s sharp header, while Medhi Benatia blazed over the bar when he should have scored after an hour.

However, Portugal held out and go on to complete their first-round against Iran while Morocco face Spain, both on June 25.

FULL TIME! Morocco had the chances, but didn’t take them. They will look back on both games and wonder how they got knocked out of the World Cup at such an early stage.

Portugal didn’t have as many chances, but made an early one count that played into their hands. Ronaldo’s fourth goal of the tournament sends his side top of Group B for the time being with Spain taking on Iran later today.

90+3′ – I don’t mean to repeat myself here, but set-pieces are wreaking havoc in the Portuguese penalty area. Again a delivery isn’t dealt with. Again the loose ball falls to Benatia. Again he sends it into the stands.

90′ – BLOCK! Ziyech glides in the Portuguese box, cuts past two markers only to see his effort from 10 yards blocked behind for a corner which is cleared by Portugal.

89′ – Do Morocco have a late goal in them? It wouldn’t be the first time we’ve seen it at this World Cup.

87′ – Portugal are holding on and happy to do so. Their priority is getting out of Group B and, as a result, we’re not seeing them hit top gear here today. When you’ve got Cristiano Ronaldo in your side, you don’t always need to be.

85′ – Ronaldo feels the faintest of touches from Amrabat and goes down looking for a penalty. Shocking simulation from the supposed best player in the world.

83′ – Medhi Benatia brings down Ronaldo right on the edge of the area. It was so close to being a penalty. Portugal have to settle for the free-kick which Ronaldo slams into the wall.

80′ – Another set-piece is cleared. The loose ball falls to Dirar whose first-time effort is good from 35 yards, but not good enough to hit the target.

76′ – Just under a quarter of an hour remains. Morocco are starting their second successive 1-0 loss in the face. Portugal are on course for a first win of these World Cup finals. Will the narrative change?

74′ – Morocco are playing some of the best football we’ve seen at the World Cup. Great movement, positioning and understanding. All they need is someone to put the ball in the back of the net!

70′ – 20 minutes remain. Morocco are forcing Portugal deeper and deeper. the European Champions are, for the most part though, relatively untroubled by the pressure.

68′ – A free-kick in a very dangerous area for Morocco. Ajax star Ziyech steps up to take, beats the wall, but fails to find the target.

61′ – CHANCE! Morocco are knocking on the door and set-pieces are proving their best source of chance creation. There’s a goalmouth scramble after Portugal fail to clear a free-kick. The ball falls to Medhi Benatia, who leans back and sends his shot well over.

57′ – WHAT A SAVE! Rui Patricio take a bow! A free-kick from the right is curled in dangerously towards goal. Belhanda, again, gets a touch with his head, forcing Patricio to make a superb reflex save down low to his right. That’s easily the closest they’ve come to scoring this afternoon.

56′ – Morocco again break down the right as Belhanda tings the palms of Patricio.

53′ – Morocco’s performance today is similar to that of their game against Iran. A lot of promise with no real end product. The effort levels are where they need to be. At this rate they’ll end this tournament as the best World Cup side to finish on 0 points.

51′ – CHANCE! Morocco spend too much time complaining about a decision from the referee, allowing Portugal to threaten with a quick free-kick.

Joao Mario gets to the byline pulls it back to the edge of the area, the ball finds it’s way to Ronaldo who… blazes over the bar with a first time shot.

48′ – A slow start being made by both teams in the second half. That will suit Portugal fine. The pressure is on Morocco to make something happen.

SECOND HALF! We’re back underway at the Luzhniki Stadium. Can Morocco get back into the game and grab the goal their performance deserves or will Portugal hold on for victory this time?

HALF TIME! An interesting opinion from Peter Schmeichel…

HALF TIME! Five goals have been enough to claim the Golden Boot in two of the last five World Cup finals. Ronaldo’s already on four…

HALF TIME! Morocco have had more possession, won more challenges, completed more passes, but find themselves behind at the break courtesy of Ronaldo’s fourth goal of the tournament. He trails ‘Own Goal’ by one and you get the feeling there’s goals left in this one.

45+2′ – CHANCE! Free-kick is whipped into the danger area by Morocco. Belhanda gets a flick on, all the ball needs is a touch, but no one is there to provide it as the ball bounces agonisingly wide of the far post.

45′ – Three minutes added on at the end of the first half.

44′ – Younes Belhanda gets to the byline, but can’t pick out a teammate with his pull back. That’s happened a lot today. Promising from Morocco without the end product.

44′ – I like the confidence. The Schalke man to save the day!

41′ – Morocco have had 51% of the possession so far and have had six shots to Portugal’s five. It’s been a good half for them so far in a lot of ways – but as it stands they are going to get knocked out.

39′ – WHAT A CHANCE! Ronaldo turns provider, placing a well-weighted pass over Morocco’s backline and into the path of Guedes. the Paris Saint-Germain forward goes with a first-time volley, but doesn’t get the angle right as Mohamedi makes a strong save.

34′ – El Ahmadi has a pop from range. Off target. Morocco need a clear-cut chance, they just can’t fashion one.

32′ – Free-kick for Portugal. there’s only one taker, Ronaldo! However, his effort fails to beat the wall.

30′ – There are worse teams than Morocco at the World Cup. They may be 1-0 down and heading out of the World Cup, but there is plenty of confidence out there.

27′ – We’ve just seen the replays. It was a 50-50 that could have been given either way as both players had a handful of the others shirt. No penalty is the right decision for my liking and it obviously wasn’t a clear enough error to warrant an official review.

26′ – PENALTY CLAIM! Guerreiro dives in on Amrabat in the box. No penalty given, but VAR could still jump in when the ball goes out of play.

25′ – To their credit, Morocco are taking the game to Portugal, who are sitting deep having taken the lead just as they did against Spain. The question now is: do Morocco have the attacking quality to level the scores like Spain did?

23′ – SAVE! Ziyech chances his arm from range and gets a wicked deflection which could have gone anywhere. In the end it was comfortable for Patricio, but it could have been anything but.

20′ – It’s crazy to think that before this summer, Ronaldo had struggled to make a mark at World Cup finals.

18′ – CHANCE! Ziyech dances his way into the Portugal box off the left wing only to see his eventual effort blocked by Jose Fonte.

17′ – Chants of “Messi, Messi, Messi” can be heard in the stands at the Luzhniki Stadium. I’m not sure that’s the best idea of how to stifle Ronaldo

12′ – Morocco are understandably a bit shell-shocked after conceding so early, but are starting to find their feet in the encounter as Medhi Benatia draws the first save out of Rui Patricio with a header.

9′ – CHANCE! Ronaldo almost moves joint-top of the scoring charts. However, his effort on the turn trickles just past the post.

8′ – What is it with this World Cup and set-pieces?

5′ – GOAL! Ronaldo. Who else? The first corner didn’t amount to much, but the second breaks the deadlock. Ronadlo fashions himself a yard of space in the box, pulls clear of his marker before stooping low to plant a header past Mohamedi. Terrible start for Morocco.

4′ – First corner of the game goes the way of the European champions. It falls to Guerreiro on the edge of the area as his shot is deflected behind for another corner.

2′ – A positive start for the underdogs as Boutaib finds space in the box to flash an early effort just off target.

KICK OFF! We’re off! Can Morocco find an answer for coping with Cristiano Ronaldo or will the Portuguese megastar fire his side to their first victory of the World Cup 2018?

Cristiano is facing an uphill battle in the scorer’s charts against… own goal!?

He was named Budweiser Man of the Match in the 1-0 loss to Iran, but today Schalke star Amine Harit is not named in the Morocco starting line-up. Could there be a heroic salvo off the bench in store?

Portugal’s opening game of this World Cup will go down as one of the best, if not the best, group game in the history of the competition. To relive all the turning points and talking points from the incredible six-goal thriller click here!

Here’s are the line-ups for Portugal’s clash with Morocco.

Portugal’s first match, a 3-3 draw against Iberian rivals Spain was very much the Cristiano Ronaldo show. In scoring all three of Portugal’s goals, the Real Madrid attacker got a good start in his bid to win the Golden Boot. Can he add to his account vs. the minnows from Morocco? You have to think that he not only can, but will!