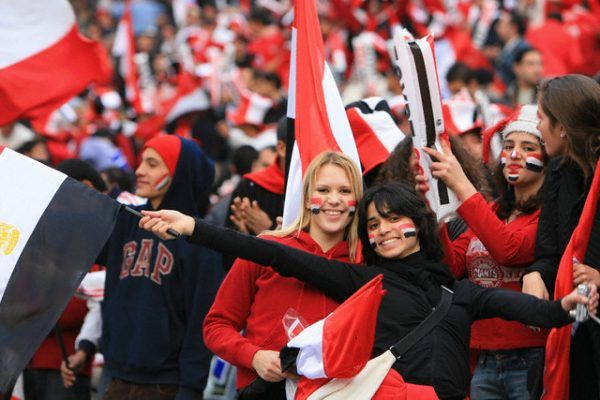 The whole world in general either males or females is currently watching and following the World Cup with passion and dream for their teams to win it.

All the North African countries, most notably Algeria, Morocco, and Tunisia are known for their females’ spectators.

Meanwhile, Egypt in specific was having more passion and dream as it has not been qualified for the World Cup since 1990.

Since the announcement of Egypt’s participation in the World Cup, all the state breathed football, dreaming about winning the World Cup.

At the same time, social networking sites were exploding with irony on the women’s reactions at the time of the match, and also it included irony about the misunderstanding of women for the rules of the game, like the posts that explain the difference between the penalty, offside, corner, etc, and that they are watching the World Cup as an ongoing trend.

Responding to these irony posts, women in Egypt began to post about their experience, either in supporting or playing football, assuring that they understand well the game’s rules and that it is not a trend.

Meanwhile, history proves that female fans attended most of the matches at the stadium in the period from the 1940s until the end of 1970s.

However, the presence of women in the stadiums narrowed during the 1980s and 1990s, and then they returned back strongly in the African Nations Cup in Egypt, that was organized in Egypt in 2006.

But the question is whether women in Egypt watch and root for the National team because they follow the trend or that they are knowledgeable about soccer?

To find the answer of this question, Daily News Egypt interviewed several women to know their views on rooting for and watching football, especially at times when the national team participates in international championships.

Daily News found that women are classified into three sections or categories which are:

The first kind is the ones who do not like watching matches at all, and also are not interested to understand the rules of the game.

Being a part of this category, Hanaa Ahmed, who is a math teacher, and mother for two girls, told Daily News Egypt that she hates football and always exploits the match’s time, to make shopping, due to the less crowded streets at that time.

She thinks that watching matches is just a kind of wasting time.

Women watch national team matches, but they do not understand the game’s rules

The second kind is those who do not understand the game’s rules, but they prefer to watch the national team matches when it participates in an international championship, as they like to follow the ongoing trend.

As one of this section, Hend Ali who, is a housewife said that she is always interested to watch Egypt’s matches; however, she does not understand the rules of the games well.

“I do not always understand the explanation of the sentence, referee is not good, as I do not understand well when he should give the player, for example a red card,” she said.

Ali referred to that she did not follow any international tournaments, but she likes to watch the most important matches.

She explained that she preferred to watch the World Cup this year, as the whole world is talking about Mohamed Salah and the World Cup and she must follow and be updated with what goes around her.

Ali noted that she always asks her friends who understand well the game’s rules, to explain them to her, describing these rules as very difficult to be understood.

The third and the last category, is the ones who always follow the international or national tournaments, understand well all the rules of the game, watching them with an analytical point of view.

As part of this category, Yossra Samir, who is a banker, told Daily News Egypt that her father always takes her to the stadium, since she was a child, explaining that she rose up in a very sports fan family, where they taught her the rules of the game.

She added that she follows the Spanish and English league and also the championship league.

Samir expressed her happiness with Egypt’s participation in the World Cup, noting that the World Cup is an important championship and that she waits for it every four years to watch a different kind of exciting football.

She pointed out that what’s exciting with the World Cup is that she watches different techniques of playing from various global teams.

Samir expressed her anger about the masculinity view that is available in Egypt, which is that the football is limited to men, assuring that there are many women in Egypt who understand the game’s rules and follow it better than men themselves.

“There are many men who do not understand the game, but they watch it, as they rose upon the concept that they are men, so they have to follow and root for football,” she assured.

What are the opinions of professional females?

For her part, Sahimaa Lotfy, football player in Egypt  women’s national football team, told Daily News Egypt that in general there are many females who understand the game well and follow the national and international leagues.

Meanwhile, she thinks that the majority are those who watch the World Cup, following the ongoing trend and as they love Egypt.

She explained that they do not understand well the game’s rules, assuring that even the female football players are not always interested in following the international or local matches, and sometimes they do not even know the names of the players, but they of course, understand well and should watch the techniques of playing.

By asking her about the reasons for the lack of the game’s understating among women in Egypt, she said that the media is the reason, as it does not focus on the women’s achievements in football, noting that she had never found an Egyptian channel broadcasting women’s football match.

She asserted that the Egyptian Football Association needs to review women’s football, in terms of the salaries, stadiums, and rewards.

Lotfy said that she herself as a football player, prefers to watch the important matches only, meanwhile, she is interested to watch every version of the World Cup.

Moreover, Farah Assem, football player in Hope Football Academy agreed with lofty that most of the girls are now watching the World Cup, as they are following the ongoing trend.

She noted that it is a trend, but it is something good as it reflects the people’s loyalty to their country, since they are watching the World Cup just to support and root for their team.

Assem remarked that the trend of rooting for national teams with less better understanding for the game’s rules is not limited to Egypt, but it is a very common trend in all countries, as no one in any county does not prefer to see his team winning and root for it even if he/she does not understand the rules of the game.

There are many people who do not understand how football is played, but we all agree on one thing, which is supporting and rooting for Egypt.

“I have not watched football matches for two years, but I am watching the World Cup this year to support the national team,” she said.

Concerning women football players themselves, she agrees with Lotfy in that the link between women football player who watch all international and national tournaments are very irrelevant, pointing out that in her team there are many girls who are super stars in playing, yet they do not know the names of the players in the Spanish or English leagues.

On the other hand, Mona Abd El Kareem the first female volleyball player in Egypt in 1995, and the first presenter of the analytical studio for a football match in Egypt in 1998, head of the women`s committee in the European Commission, disagreed with Lotfy, telling Daily News Egypt that women rooting for their teams are not a new thing or a trend, pointing out that she used to watch and follow the World Cup since 1980s.

And that since that time, the women used to root for the national team, either in the stadium or even from homes.

Earlier, the executive director of the Association of Tour Operators of Russia, Maya Lomidze, announced that about 720,000 Fan IDs for this summer’s FIFA World Cup in Russia were issued and around 25% of those were requested by women, according to the Russian news agency “Sputnik.”

Abd El Kareem explained that there are many studies conducted on the issue of women who root for certain teams in football and revealed that women always encourage their team, as they have a belief that by encouraging their team, the team could achieve better results.

She asserted that football is not limited to men, showcasing that women in Egypt are now referees and there are many female football players who win international champions.

Finally, whatever women watch football matches in general or the World Cup in specific because they are following an ongoing trend or because they are knowledgeable and interested in it, no one should have the right to judge them or use irony towards them, since women are just playing professional football as men, hence both men and women have the right to watch the match.

Being interested is not gender based, it is about having the passion to know and understand the game well, it also relates to having hope and moments that get people interested either be it they are men or women. Also, there are women who watch the World Cup just to support Egypt, there are also men who watch the matches just to meet their friends in coffee shops or just to support Egypt, in addition, there are women and men who understand well the game and its rules and interested in it.

Germany full of reflection ahead of critical Sweden game