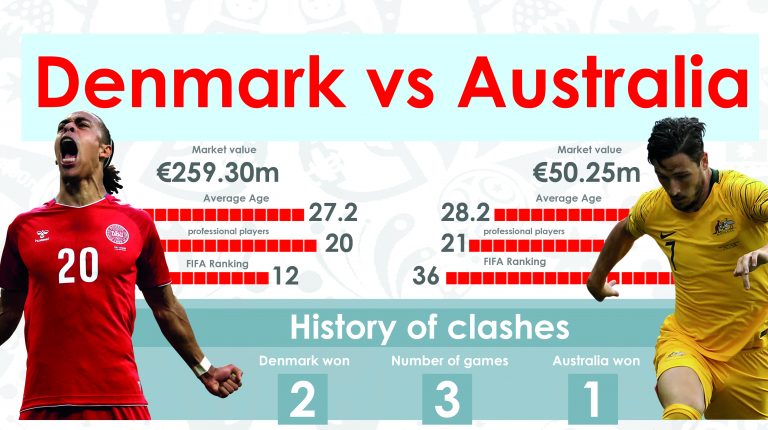 The second round of Group C in the 2018 World Cup will start on Thursday with the Denmark versus Australia match at 2 pm Thursday at Samara Arena Stadium.

With three points gained from the first round, Denmark will enter their next game against Australia with high hopes to achieve victory and confirm its qualification chances to the round of 16.

Denmark achieved a difficult 1-0 victory over Peru in their World Cup opener, giving them the lead in Group C. On the other hand, Australia will work hard to achieve a positive result in their clash against Denmark to maintain their chances in progressing to next stage in the World Cup. Australia’s team lie at the bottom of their group with no points from last match against France.

In the same group, the French team will play a tough game against Peru at Ekaterinburg Arena at 5 pm on Thursday. The French team know very well that facing the Peruvian team will not be easy, particularly that about 30,000 Peruvian fans will attend the game to support their team. Peru will need their fans’ enthusiasm to achieve a positive result, especially as France are studded with international stars.

The Blues will do their best to gain the Thursday match’s three points to confirm their qualification to the round of 16, as well as present a good performance that reflects the French football’s true level after their lower-than-expected performance in the first-round match.

Peru has no other choice, but winning the game to compensate their 0-1 defeat to Denmark in the first round of the group. During the game, Peru’s Christian Cueva missed a penalty before Denmark scored the winning in the second half. Despite the difficulty of the France versus Peru clash, it will be the last chance for Peru to maintain their qualification chance to next stage in the World Cup. Peru were winless in their last seven World Cup games, as they drew in two games and lost five.

Also, on Thursday, Argentina will face Croatia at the Nizhny Novgorod Stadium at 8 pm, in the second round of Group D.

The Argentinian team will fight to end the next match in their favour to preserve their chances of going further in the tournament after drawing Iceland (1-1) in the first round of the group stage.

Argentina, led by the legendary Lionel Messi who missed a penalty against Iceland, are aware of the difficulty of their next game, especially as Croatia has a number of top-notch players, including Mateo Kovacic and Luka Modrić.

Messi will try to show his best after he was criticised for missing a penalty and wasting his team’s victory chance against Iceland.