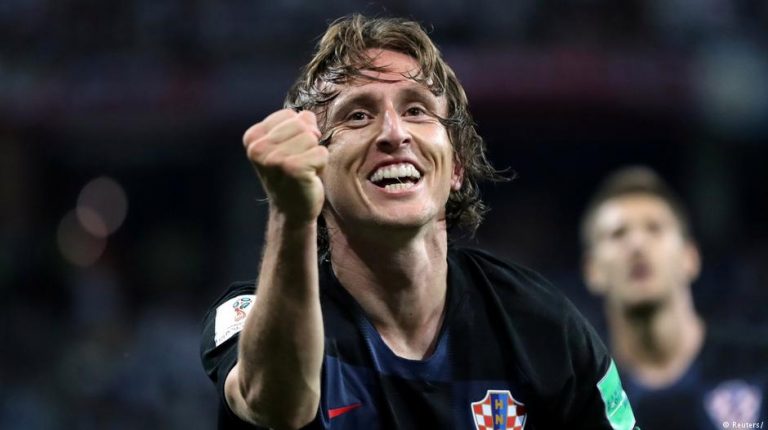 Ante Rebic, Luka Modric and Ivan Rakitic got the goals as Croatia turned Argentina’s slow World Cup start into a minor disaster. Iceland could take Argentina’s fate out of their hands tomorrow.Match report to follow shortly.

Both sides spurned excellent opportunities in an open first half, and it was a goalkeeping error from Willy Caballero that ultimately opened the floodgates. Dealing with a simple back pass, Caballero tried to get cute, serving the ball up on a plate for Ante Rebic. The Frankfurt forward made no mistake, volleying the ball home, and the Albiceleste never really seemed to recover from this.

Luka Modric’s second goal was the pick of the bunch, a placed effort from range from Croatia’s captain. Ivan Rakitic’s third was the by-product of a demoralized Argentina throwing the kitchen sink forward in attack.

The result leaves Argentina on just one point after two games, following their opening draw with Iceland. Despite exhibiting a little more rhythm in the first half than they did against Iceland, Jorge Sampaoli’s team was ultimately outplayed.

Croatia, with two wins, are guaranteed a spot in the last 16. Iceland, who play Nigeria tomorrow, could put Argentina in all sorts of trouble with a win, or even a draw.

Argentina’s last match is against Nigeria, while Croatia will face Iceland.

90+1′ Rakitic’s initial shot was only parried by Caballero and Kovacic kept his calm to give the ball back to the number 7, who made no mistake the second time. Now, crucially, Argentina’s points tally — and their goal difference — are both looking bad.

90′ Meza tries to get a shot away after a nice feed from Messi. Great block to clear the danger, and the corner thereafter fizzles out. There will be four more minutes.

89′ Modric has a pop from range but it’s well wide. Argentina haven’t been in the game since conceding a second.

86′ And to pour salt in the wound, the free kick is in range for Rakitic… It’s a cracking strike from the Barca man, rattling Caballero’s crossbar.

84′ Tempers flare after a foul on Modric. Booking for Nicolas Otamendi for the original foul. If the ref’s planning on punishing players who joined the fray, he could save himself the time and book all 22!

81′ What a beauty from Modric, receiving the ball about 25 yards out. He turned his man left, and then back onto his right foot, before curling it into the corner. That could be an early bath for Argentina.

80′ Ivan Rakitic with a shot that’s blocked in the box. The more Argentina push forward, the more open they are.

78′ Corner Argentina, who are starting to play with the requisite urgency.

75′ Luka Modric might not be everybody’s cup of tea in Croatia, given his ties to shady footie boss Zdravko Mamic, but he’s been an utter trooper tonight — defensively as well as on the ball.

69′ “Brother, hit the ball long!” Kevin-Prince Boateng approves of his Frankfurt’s teammate’s goal. (The “Brother” gag is an in-joke from their German Cup celebrations last month. Rebic’s German needs a bit of polishing, but apparently, his tactical input pre-game for Boateng was to say “brother, hit the ball long,” so that he could run in behind Bayern Munich’s defense.)

66′ Mandzukic nearly makes it two, latching on to a delivery from Vrsjalko. Side netting.

64′ More from Maradona-watch, quite literally. He’s wearing two timepieces, one on each wrist. One for local time and one for Buenos Aires?

59′ Cameras cut to Diego Maradona, who’s in the process of chewing his thumbnail into obliteration.

58′ Mario Mandzukic’s latest foul is the one that gets him his yellow card. That boy’s a proper bruiser.

57′ Sub Croatia: Rebic is hurt, and is replaced by Hoffenheim’s Andrej Kramaric.

56′ Croatia smell blood. Perisic battles his way down the right and forces in a cross. Mandzukic got his head to it, but it’s deflected behind.

53′ That one’s going to haunt Argentina keeper Willy Caballero. A simple back pass just needed to be dealt with. He tried an elaborate chipped pass to a defender, and didn’t clear Ante Rebic. Rebic gratefully volleyed it home.

52′ Jorge Sampaoli begins to sense the urgency. Gonzalo Higuain readying to come on. But in whose place?

51′ Rebic brought down on the break, yellow card for Mercado for a tactical foul.

48′ Worth keeping in mind, as Argentina stare at early elimination, that they were lucky to even reach the tournament.

HT analysis: Croatia have put up quite a fight so far, having plenty of joy against a nervy Argentine back line. Both sides have been creating chances, though, and Messi has had a little more support than he did against Iceland. The last real chance of the half was possibly the best, Ante Rebic couldn’t get himself settled in time to make use of what could have been a one-on-one with the keeper. That said, Mario Mandzukic’s diving header wasn’t a bad opportunity either.

45+2′ Ante Rebic blasts a golden opportunity well over the bar. Once again there’s acres of space down the left channel, but Rebic struggled to get the ball under control and then got underneath his shot.

44′ Vrsjalko is the latest to pick up a knock in what’s been a physical contest. Frankfurt’s Ante Rebic picked up a yellow moments ago.

29′ Croatia are looking more than a match for the favorites so far, with Argentina particularly shaky at the back.

15′ Ivan Rakitic has picked up a knock in a tackle with Enzo Perez. He’s grimacing but is back on his feet.

13′ This is better from Argentina. Others are running and making themselves available when Messi has the ball. The little man just made a point of going and kissing Sergio Aguero for immediately making a vertical run to offer an option. Aguero then crossed and the subsequent shot was deflected over.

12′ A looping ball over the top seeks out Messi, who can’t quite reach it.

9′ Mario Mandzukic writhes around after a foul by Tagliafico. But he’s back on his feet and sprinting within seconds.

6′ Offside flag pulls him back, but Perisic was in all kinds of space out left once again. Argentina can’t leave him that much room.

5′ Ivan Perisic goes close early for Croatia, breaking clear down the left and firing off a low shot. Strong save to push it behind for a corner.

Messi and Modric gather in the middle for the coin toss. Is that the highest-quality captain pairing we’ve seen so far in Russia? (With apologies to Cristiano Ronaldo and Sergio Ramos!)

Here’s a quick look at the teams tonight:

The Argentina line-up doesn’t feature any Bundesliga-based players but not to worry — the Croatian team is full of them! Eintracht Frankfurt’s Ante Rebic was dangerous from the left wing against Nigeria, as he was all season for the German Cup winners, while Hoffenheim’s Andrej Kramaric also provides a goal threat behind former Bayern Munich Champions League winner Mario Mandzukic. On the opposite flank, former Wolfsburg winger Ivan Perisic offers goals and pace.

Coach Dalic Zlatko can bring Bundesliga talent off the bench too in the form of Bayer Leverkusen youngster Tin Jedvaj and Schalke’s Juventus loanee Marko Pjaca.

Welcome to DW’s live coverage of Argentina vs. Croatia

A star-studded Argentina side got off to an underwhelming start against Iceland on Saturday and now face arguably their toughest Group D opponents. Inevitably, much of the focus is on Lionel Messi and his personal duel with Cristiano Ronaldo but, while “CR7” is carrying Portugal so far with four goals, Messi made headlines by missing a penalty. More is also expected from the likes of Angel Di Maria, Javier Mascherano and Sergio Aguero.

But Croatia also boast a hugely talented side and impressed in a 2-0 win over Nigeria in their opening game. With a Real Madrid and Barcelona axis of Luka Modric and Ivan Rakitic in midfield, behind a front four of Ante Rebic, Andrej Kramaric, Ivan Perisic and Mario Mandzukic, the Croats will certainly cause Argentina problems.