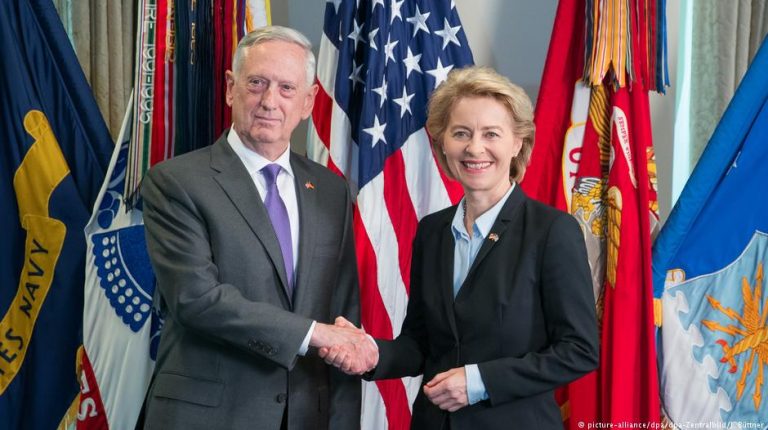 Germany announced earlier this month that it will increase its defense spending to 1.5 percent of GDP by 2024, but will fail to meet its NATO spending obligation of 2 percent of GDP.

Speaking in Washington after meeting with US Secretary of Defense Jim Mattis, von der Leyen said Germany still has the NATO spending target firmly in its sights. She added that the German government has covered “a part of the stretch” towards this goal.

“We know in Germany that we have to take on our share of the burden to defend our democracies and our values,” von der Leyen said. “We’re willing and committed to doing so. We’ve come a long way. There’s still a lot to do.”

Mattis, who is considered by many in Europe one of the last reliable partners in US President Donald Trump’s Cabinet, said he is satisfied with Germany’s contribution to NATO and its plans to increase its defense budget.

“I think they are on the right track,” Mattis said Wednesday. “We welcome the announcement that Germany wants to increase its defense spending by 80 percent by 2024.”

Mattis added that he and von der Leyen speak frequently, and that he “does not take this relationship for granted.” The United States has repeatedly called on European allies, and Germany in particular, to increase defense spending.

Von der Leyen said the friendship between the two countries “lies very close to our hearts,” telling Mattis that “it is good to have friends like you.”

Von der Leyen’s visit to the Pentagon was one stop on a multi-destination US tour. She met with John Bolton, Trump’s national security advisor, and was to meet the US Secretary of State later Wednesday.

Berlin and Washington have been arguing for months regarding Germany’s defense budget, which was 1.24 percent of GDP last year. Defense spending has been hugely unpopular in Germany, and constitutional limitations on what the country’s postwar military is permitted to do is often cited as the reason against military spending.

Trump blasted Europe’s defense spending at the recent G7 meeting in Canada. The US currently pays 22 percent of NATO’s spending budget, by far more than any of the other 28 members of the group.

Jens Stoltenberg, the head of NATO, has also pressed Germany to increase defense spending, given its stable economy, but agreed with Merkel that there should be “trans-Atlantic unity” between the allies.

Every evening at 1830 UTC, DW’s editors send out a selection of news features. You can sign up to receive it directly here.