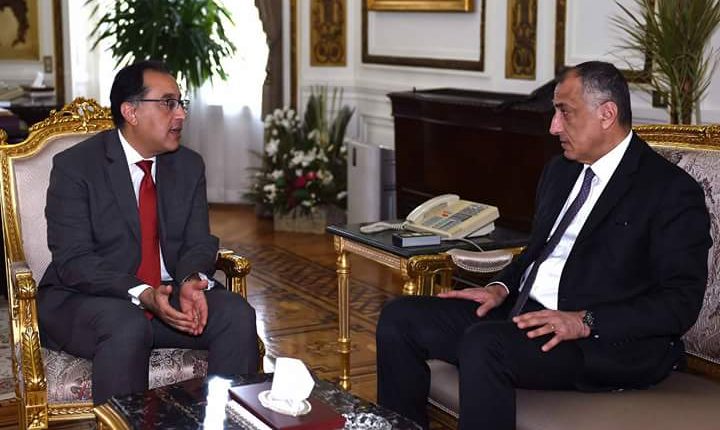 Tarek Amer, governor of the Central Bank of Egypt (CBE), met on Thursday with Prime Minister Mostafa Madbouly to discuss several issues, including foreign exchange reserves and legislation on monetary and financial policy.

According to Madbouly, the meeting also included discussing financial and economic conditions, as updates were given on the development of the current foreign exchange reserves and the indices of the balance of payments, as well as developments of the International Monetary Fund (IMF)-backed reform programme and the total foreign currency resources of the banking sector. He pointed out that the current phase will see great cooperation and coordination between the government and the CBE to achieve the best interests of the Egyptian economy.

Madbouly added that the debts owed by several governmental bodies to banks were also discussed, along with mechanisms to repay them. Additionally, the situation of foreign debts was discussed.

The meeting also tackled many proposed monetary and financial policy laws that are required to be issued over the upcoming period to help develop the Egyptian economy.

He noted that an ongoing mechanism for cooperation and coordination between the government and the CBE was agreed upon, stressing that the aim is to improve citizens’ lives.

Meanwhile, Amer met last week with Minister of Communications and Information Technology Amr Talaat. The meeting included agreeing to enhance joint cooperation in terms of several strategic projects in the fields of developing the e-payments system and enhancing financial inclusion, as well as the ways to support and encourage innovative youth and entrepreneurs in the fields of financial technology, while also offering them microfinance services.

The meeting was also attended by ministry leaders, including Khaled El Attar, deputy minister of planning, digital transformation, and automation, in addition to Raafat Hendy, infrastructure director at the ministry.

According to Amer, an integrated plan was laid out in order to achieve financial inclusion and turn Egypt into one of the most important investment hubs in the field of financial technology, communications, and information technology.

The plan also aims to support young talent, such as engineers and scientists, in order to benefit from their ideas and support their innovations through the initiatives launched by the CBE.

Amer stressed that he is confident these plans will succeed thanks to the minister of communications and his assistants’ experience in the field, in addition to the expertise and capabilities of the Egyptian banking sector.

For his part, Talaat stressed the importance of cooperating with the CBE to implement the state’s strategy for a digital economy in light of the important role the bank is playing to enhance the concept of financial inclusion and merge the informal economy into the formal economic system.

He explained that the ministry’s role in achieving the shift into a digital economy through cooperating with the CBE aims to enhance the role of information technology and communications as well as encourage e-commerce.

The meeting also included discussing joint cooperation in supporting young people in the field of information technology entrepreneurship through helping fund their projects through the initiatives adopted by the CBE to encourage them to develop their ideas. The meeting also discussed offering them microfinancing and qualifying graduates to work in the field of communications and information technology.

Parliament’s approval of additional allocations for this FY budget will not raise target deficit: planning and budget committee head