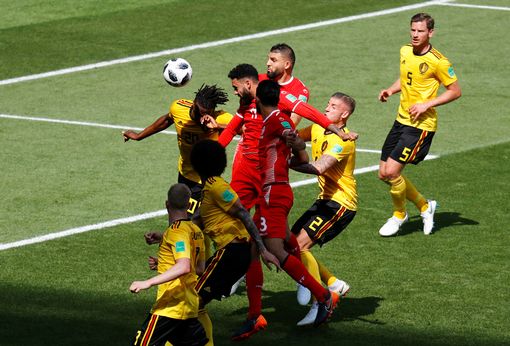 Saturday was another disappointing day for Arabs in the 2018 World Cup as Belgium hammered Tunisia 5-2 in the second round of Group G. The Eagles of Carthage are the last of four participating Arab teams to make their exit out of the tournament. The 21st edition of World Cup in Russia witnessed historic Arab participation, as four Arab football teams qualified for the World Cup finals for the first time in history; Egypt, Saudi Arabia, Tunisia, and Morocco. Unfortunately, none of them could make it to the competition’s Round of 16.

Today, Egyptian international referee Gehad Grisha will take charge of his first World Cup game when England faces Panama in the second round of Group G at the Nizhny Novgorod Stadium.

The English team aims to confirm their qualification to the knockout stage at the expense of Panama, a team in real trouble after losing their first game 3-0 to Belgium.

Gareth Southgate, head coach of the Three Lions, hopes to score early in the game and avoid the last match’s scenario when Harry Kane scored a 90th-minute winner against Tunisia in the first round of Group G.

The Panamanian side, which qualified for the first time to the World Cup finals at the expense of the United States, hopes to achieve a positive result in the Sunday game and maintain its chances of qualification to the next stage.

It will be the first encounter between England and their Panamanian counterpart.

Senegal will enter the game with three points gained from defeating Poland 2-1, seizing second place in the group.

Liverpool star Sadio Mane and co are looking forward to surpassing the Samurai that tops Group H in the first round after defeating Colombia 2-0.

Japan will fight to achieve a positive result in the match as it will witness the presence of the Japanese Princess Takamado, the first member of the Imperial Palace of Japan to visit Russia in 100 years.

The Poland v Colombia match will be both teams’ last chance to go further in the tournament. The Colombian side, whose star James Rodriguez won the top scorer award in the 2014 World Cup in Brazil, are in trouble as they seek to defeat Poland to avoid mathematical problems.