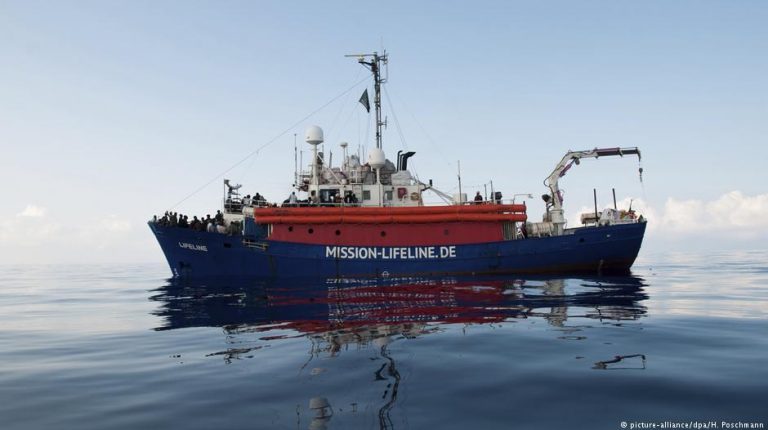 An NGO rescue ship and a merchant vessel are waiting to disembark more than 300 migrants rescued in the Mediterranean Sea. Malta and Italy have refused the Mission Lifeline rescue ship permission to dock.A migrant rescue vessel with more than 200 people aboard remained at sea in the Mediterranean on Sunday, as both Italy and Malta refused the ship permission to dock at their ports.

The Lifeline vessel belonging to the German NGO Mission Lifeline has been waiting in limbo since Thursday after picking up 239 people between Libya and the Italian island of Lampedusa.

Italy’s new government has banned on NGO migrant rescue ships from docking at its ports and urged Malta to take in the Lifeline.

“These boats can forget about reaching Italy, I want to stop the business of trafficking and mafia,” the right-wing leader of the League said.

The spat between Malta and Italy over the Lifeline echoes that of the Aquarius rescue boat earlier this month.

The Aquarius ultimately landed with nearly 600 rescued migrants in Spain after the new Socialist government there agreed to accept them, but not before highlighting deep divisions within the EU over migration.

Some 16 EU leaders are set to tackle the migration issue at a mini-summit on Sunday, ahead of a critical full European leaders summit later in the week.

Italy has taken in nearly 700,000 migrants and asylum-seekers since 2013, although numbers have fallen considerably in recent months due to EU action in the central Mediterranean and in northern Africa.

Read more: Where do EU countries stand on migration?

Malta has said it is not responsible for the boat, even though it is now in Maltese rescue waters. On Saturday, Maltese authorities provided the boat with food and supplies.

Maltese Prime Minister Joseph Muscat told local radio on Saturday that the Italian government was right that the Lifeline intervened in Libya’s rescue zone and that the NGO failed to heed orders from the Libyan coast guard.

However, he said it was wrong for Italy to order the Lifeline to Malta.

Muscat said the German NGO ship was flying under a Dutch flag as a “pleasure boat” and as a result the Netherlands was responsible for ordering it to continue to another destination.

He added that a ship registered as a “pleasure boat” should not be carrying out rescue operations.

Mission Lifeline countered that the LIfeline is registered in the Netherlands and is suitable for rescue operations.

Meanwhile, the Danish-flagged Alexander Maersk cargo ship has also taken 113 people onboard and is awaiting a port to undock the migrants after receiving a distress call on Thursday. Mission Lifeline said they aided in that rescue.

Mission Lifeline has said saving lives at sea is a not a violation of law but an international legal requirement. It says returning migrants to Libya where they face possible human rights abuses is against international law.

Meanwhile, the Franco-German-Italian NGO that runs the Aquarius called on EU governments to allow people rescued at sea to be brought a safe port.

SOS Mediterranee said EU training and financing of the Libyan coast guard to intercept migrants has “resulted in thousands of people being sent back to the ‘Libyan hell’ they were trying to escape.”