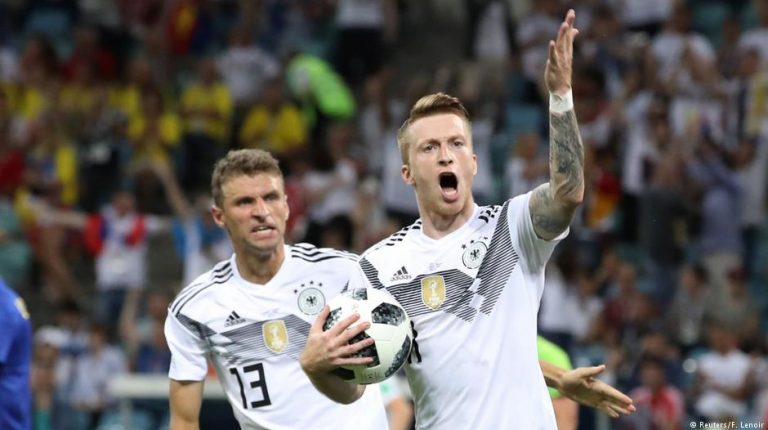 After the euphoria of beating Sweden, Germany and Toni Kroos wrote the headlines. Germany’s best player at the 2018 World Cup is a far more unlikely character.After all the drama of Germany’s last-minute win against Sweden, the significance of Marco Reus has been somewhat lost.

The mere sight of Reus on the pitch was enough of a delight. The man who has suffered joint inflations, a cruciate ligament tear, an ankle ligament tear and a syndesmosis tear was finally playing for Germany on the biggest stage of them all. There was a sense in Germany that the 29-year-old had finally got the chance he has long deserved.

Just being here though wasn’t for Reus. He wanted more – and remarkably he has delivered it too.

Defeat in the opener left his impressive cameo largely unnoticed. Dramatic victory in the second put Toni Kroos in the spotlight, despite Reus winning man of the match. But Reus has perhaps been Germany’s best player at the World Cup so far. He has led when others in the team were expected to. He has performed even when the collective hasn’t. He has been brilliant.

Quality in the face of adversity

Injury limited him to just 15 games in a tumultuous season of coaching changes and dramatic results at Borussia Dortmund. This wasn’t enough to stop Reus, though.

This Germany team hasn’t played well for a long time. From the luxury of the training camp to the isolation of Germany’s base camp in Russia, Reus has been involved. Throughout that time, there have been concerns about division in the team and questions about leadership. Out of this an increasingly tense relationship with the media has developed, adding to the pressure on this group. Reus hasn’t looked fazed at any stage.

It seems the 29-year-old can’t be stopped. Against Sweden, he dragged a disjointed Germany over the line. He wouldn’t let this occasion get away from him. He kept trying to create even when his teammates couldn’t follow. When Germany were desperate he willed the ball into the net with his knee. When Germany were hopeful, he set up Kroos. It was an exemplary performance, a captain’s performance. The only thing missing was a battle scar – but Reus has enough of those.

The physical pain of injuries, the emotional despair of not being a part of Germany’s crowning glory in 2014 – both Reus the player and the man have endured. Now it’s his time to enjoy. But the truth is he’s doing far more than that, and we’re the ones enjoying.