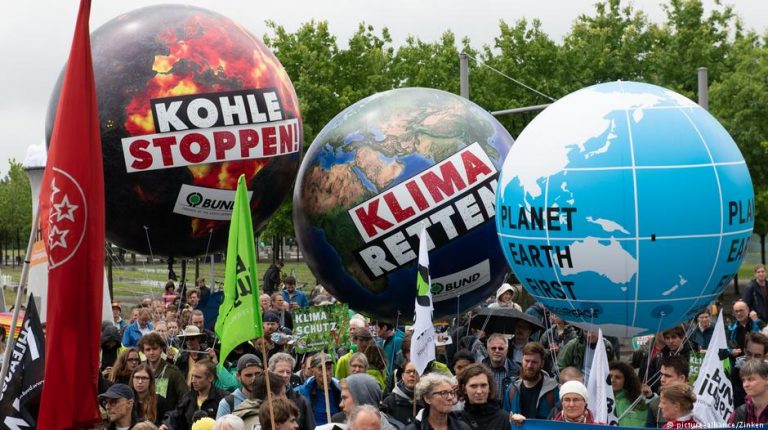 Demonstrations took place in at least five cities, including Berlin and Hamburg. The protests come two days before a government commission intended to map a national path away from coal is to convene for the first time.Demonstrators took to the streets of Berlin and other German cities Sunday to press the government to accelerate the country’s reduction in coal consumption.

The protesters — who included families pushing strollers, people on bicycles and samba bands — marched past government office buildings two days before a state commission on coal consumption is to convene for the first time.

The commission is tasked with laying out a road map for the country to completely eliminate its reliance on coal for heat and electricity.

Germany has made considerable investments in renewable and clean energy production such as wind and solar, but coal remains an integral part of generating electricity.

About 33 percent of electricity production comes from renewable energy sources. But another 34 percent comes from coal, including 22 percent that is soft-burning lignite coal.

Otherwise known as brown coal, the lignite is especially damaging to the environment as it emits considerably more carbon dioxide (CO2) into the atmosphere than black coal when burned.

Keeping the temperature down

CO2 is a heat-trapping gas that virtually all climate scientists believe is a primary driver of global warming.

At the Paris climate conference in 2016 virtually all of the countries of the world agreed to reduce their CO2 emissions in the coming decades in order to keep global temperature increases to within 1.5 degrees Celsius (2.7 degrees Fahrenheit) of the preindustrial age.

Germany’s environment minister, Svenja Schulze, announced last week that the country would likely miss its goal of cutting greenhouse gas emissions by 40 percent from 1990 levels before 2020. The announcement came despite the recent push for substantial CO2 cuts.

Economic Affairs Minister Peter Altmaier said Germany would not be able to break its dependency on coal before 2030. To do so would be too disruptive to employment and the industrial sector, he said.

Back at the demonstration, environmental groups used black handprints to illustrate the dirty aspect of coal.

There were no figures from organizers for attendance at the demonstration in Berlin and media estimates varied widely, ranging from hundreds to 2,500. By one count, 1,500 people turned out in other cities, including Hamburg, Dortmund and Erfurt, near Leipzig.