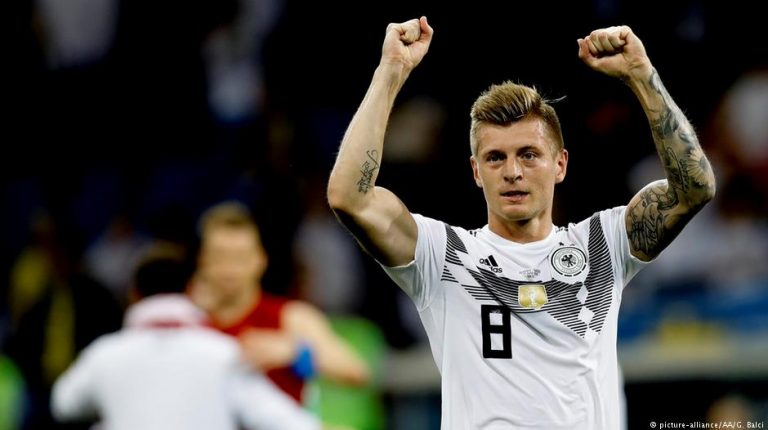 It was far from a perfect performance again Sweden, but the reigning champions have finally arrived at the World Cup. Toni Kroos and Marco Reus answered those critics who had questioned the German players’ hunger.Laid out in a line, the column inches written about Germany’s failings in the last week would have stretched from Berlin to Moscow and then south to Sochi.

After defeat to Mexico in their opening game, there was hardly an aspect of Germany’s game which wasn’t questioned and criticized by a furious media back home.

Some of the criticism was tactical; the midfield was absent, the full-backs were ill-disciplined and the center-backs were exposed.

Others singled out individuals. Coach Joachim Löw was accused of showing too much loyalty to his World Cup winners and Mesut Özil was a popular — or rather populist — target. Even the fans were said to be too quiet.

Others criticized the mentality of a generation of players who, having already reached the very top in Rio four years, were apparently no longer as hungry for success.

“Will they go out with their heads held high, in the knowledge that they’ve given absolutely everything for a common cause, one last time?” asked kicker magazine. “Or will they depart as fallen heroes? Failed by their hubris, satiation and ego?”

The German camp was besieged both by their Group F opponents in Russia and by their supposed allies back home. Drastic times call for drastic measures — and Löw acted, making four changes as Jonas Hector, Antonio Rüdiger, Sebastian Rudy and Marco Reus all came into the starting XI.

But despite an opening 10 minutes in which Germany pinned Sweden back inside their own penalty area, completing 122 passes to the Swedes’ six, the early breakthrough didn’t come and the same carelessness in possession returned.

Jerome Boateng’s blushes were spared by a combination of Manuel Neuer and a lenient video assistant referee who declined to intervene, despite Boateng appearing to foul Marus Berg in the box.

But there would be no safety net for Toni Kroos when the metronomic jewel in Germany’s crown inexplicably gave the ball away in the 32nd minute, and Sweden took the lead.

Were the critics right? Was the desire simply not there? The players can convince themselves they’re fully focused but had everyone underestimated just how hard it is to motivate a team of world champions to go out and win a tournament they’ve already won? The precedents are certainly there.

Then again, that’s not the attitude that has seen a player like Kroos win three Bundesliga titles, three German Cups, a La Liga title and four European Cups — the only German player who can claim that last stat.

It’s also not the attitude that has seen Marco Reus overcome World Cup heartache and recover from injury after injury to finally make his first World Cup start aged 29 — it was fitting that the Borussia Dortmund talisman got the equalizer just after half-time.

Now Germany started playing. Reus could have put them ahead but failed to make contact with the ball in the six-yard-box, substitute Mario Gomez saw a header well saved at point-blank range by Robin Olsen, and a long-range Julian Brandt effort crashed off the post – again.

By the time Kroos and Reus stood together over a free-kick on the edge of the box in the fifth minute of stoppage time, Germany had also been reduced to 10 men following Boateng’s dismissal and were staring at a draw which would have seen their World Cup destiny taken out of their hands.

But players like Kroos and Reus have learned a thing or two about destiny over the years and, after a quick roll of the ball and a foot placed to stop it, Kroos curled a majestic, curling shot into the top corner.

“You have to have the balls to just keep on playing like that after making such a mistake,” he told German public broadcaster ARD post-match. Moments earlier, he had been on his knees punching the turf in delight before standing up to pump his chest in the direction of the travelling fans. Vindication. Victory. Validation.

“A lot of people would have been happy to see us go out,” he said, a sentiment echoed by Reus. “But we’re not going to make it so easy for them.”

There’s some fight left in the world champions yet.