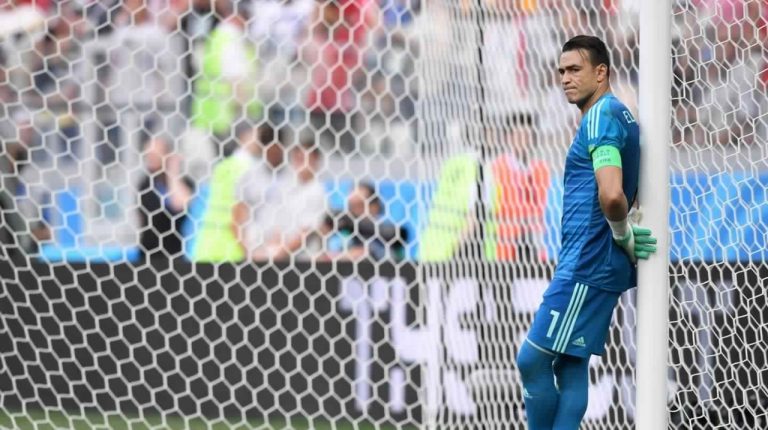 Volgograd, Russia – It was a frustrating and disappointing end for Egypt’s campaign in the 2018 World Cup as they failed to achieve any positive results in the tournament and exited from the group stage after losing to Uruguay, Russia, and Saudi Arabia.

Egypt was the first of four participating Arab teams to make their way out of the tournament. The 21st edition of the World Cup in Russia has witnessed historic Arab participation, as four Arab football teams qualified for the World Cup for the first time in history: Egypt, Saudi Arabia, Tunisia, and Morocco. Unfortunately, none of them could make it to the competition’s round of 16.

Saudi Arabia was the lowest ranked team in Group A; however, they played better in their last World Cup clash against Egypt, achieving their only win at the expense of the Pharaohs, in the presence of 36,328 fans at Volgograd Arena.

The Gulf team showed an impressive performance in the first 45 minutes, while Egypt was too defensive, until they had the lead through a superb goal by Liverpool star Mohamed Salah at the 22nd minute. The “Egyptian King” was named Player of the Match.

Egypt’s veteran goalkeeper Essam El-Hadary celebrated becoming the oldest player in World Cup history through saving Fahad Al Mulwallad’s penalty kick at the 41st minute. Aided by VAR, the referee handed Saudi Arabia another penalty, but this one found the net, making it 1-1 at the break.

In the second half, El-Hadary continued to save dangerous shots and headers from Saudi Arabia, while Salah, Trezeguet, and Warda combined outside the Saudi penalty area but with no real chances. For drama, the Green Falcons won the game courtesy of a fine last-minute brace from Salem Al Dawsary. The Saudis finished third in Group A, and Egypt came fourth, but both teams are now out of the tournament.

Meanwhile, Russia had their first defeat in the World Cup, as they lost 0-3 to Uruguay; however, they both are through to the tournament’s round of 16.

The only bright aspect of Tuesday was El-Hadary’s new World Cup record, as he became the oldest player in the tournament’s history at the age of 45, beating his closest contender, Colombia’s Faryd Mondragon (43 when he played in the 2014 World Cup), not by a few months, but by a couple of years. He also surpassed Roger Milla, who played in the 1994 World Cup held in the United States. El-Hadary won four Africa Cup of Nations titles with Egypt in 1998, 2006, 2008, and 2010.

On the other hand, an official in the Egyptian Football Association (EFA) said that FIFA will impose huge fines on the association because the coaching staff of Egypt refused to allow Qatari-funded beIN Sport to conduct interviews with the Egyptian players during the tournament. The Qatari network was granted exclusive broadcasting rights of the World Cup games by FIFA, as well as conducting at least two interviews with any participating team in the tournament.