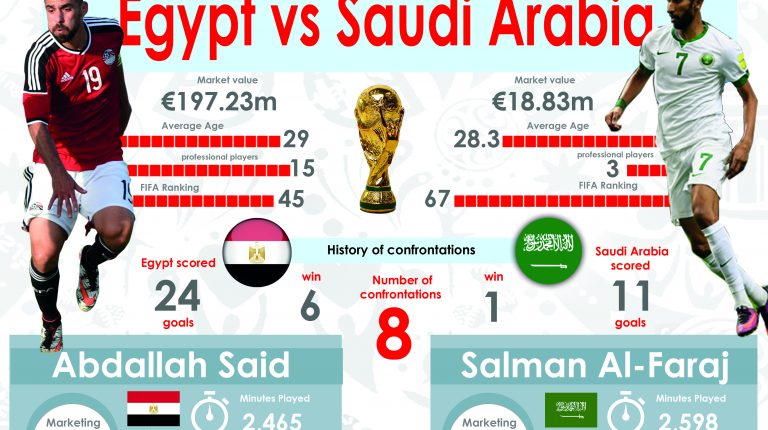 The Egyptian national football team will end their 2018 World Cup campaign on Monday when they play against Saudi Arabia at the Volgograd Arena in the last round of the tournament’s group stage. Egypt and Saudi Arabia have already exited the World Cup after failing to gain any points from their previous games in Group A, while Uruguay and Russia qualified for the competition’s Round of 16.
Egypt will seek to achieve their first win in World Cup history at the expense of the Saudi team. Egyptian fans have long waited for positive results in their team’s clashes as they experienced bitterness when the Pharaohs lost their previous games against Uruguay and Russia to exit the World Cup earlier than expected. A state of public frustration dominated Egypt in the last few days.
The Egyptian Football Association and the coaching staff of Egypt, led by Argentinian Hector Cuper, held several meetings with the team to enthuse them to defeat Saudi Arabia because Egyptian fans would not tolerate further losses in the tournament. Achieving a positive result against Saudi Arabia is the only way to ease the fierce wave of criticism and accusations of negligence against Egypt and their coaching staff.
Egypt’s Omar Gaber suffered a thigh injury during the team’s training session, so he will not play in the next game. Meanwhile, West Bromwich Albion’s defender Ahmed Hegazy and Al-Ahly’s goalkeeper Mohamed Al-Shennawy are ready for meeting Saudi Arabia after they recovered from physical fatigue they experienced in the last game.
Cuper said he will not make any changes in the team’s line-up against Saudi Arabia, despite the team being officially out of the World Cup. Egypt’s expected line-up will include Mohamed El-Shenawy (GK), Ahmed Hegazi, Ali Gabr, Ahmed Fathy, Mohamed Abdel Shafy, Tarek Hamed, Mohamed Elneny, Abdallah Said, Mahmoud “Trezeguet” Hassan, Mohamed Salah, and Amr Warda.
The game may witness the participation of Egypt’s veteran goalkeeper Essam Al-Hadary,45, so that he can enter the FIFA World Cup record books by becoming the oldest player to compete in the tournament’s finals. Al-Raed’s playmaker Mahmoud “Shikabala” Abdel Razek and Huddersfield Town’s winger Ramadan Sobhy are also expected to play in the coming game.
On the other hand, Saudi Arabia, under coach Juan Pizzi, will struggle to achieve victory over Egypt to improve their image in the World Cup after losing twice; 0-5 to Russia and 0-1 to Uruguay, exiting the World Cup group stage. The Green Falcons hope to defeat their Egyptian counterpart to delight Saudi fans who were frustrated with their team’s poor performance and bad results. Saudi Arabia improved much in their game against Uruguay, conceding fewer chances as they cut a more resolute unit at the back.
The expected Saudi line-up against Egypt includes Mohammed Al-Owais (GK), Mohammed Al-Breik, Ali Al-Bulaihy, Osama Hawsawy, Yasser Al-Shahrany, Salman Al-Faraj, Hattan Bahebri, Yasser Al-Shehri, Abdel Latif Otayf, Salem Al-Dawsari, and Fahd Al-Muwallad.