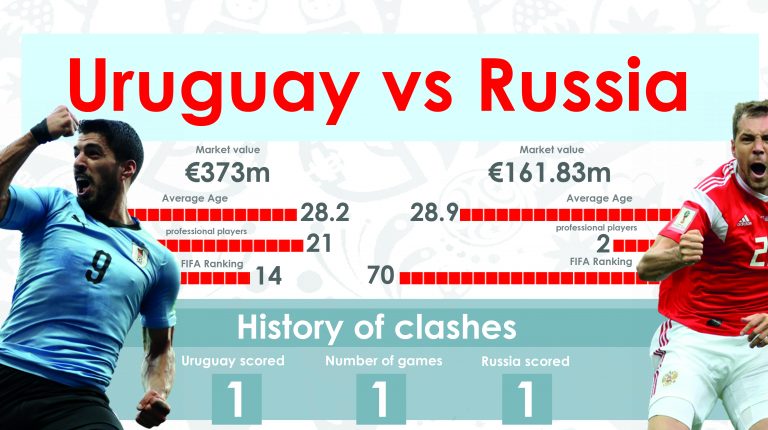 The third and final round of the World Cup group stage will start on Monday when hosts Russia face Uruguay at Samara Arena. Both teams have six points from two wins over Egypt and Saudi Arabia in Group A.

The Russians unexpectedly presented a great performance in their World Cup campaign and are looking to snatch the lead of their group when they meet Uruguay, benefiting from their powerful forward line, including Artem Dzyuba, Denis Cheryshev, and Fyodor Smolov.

Uruguay, under veteran coach Oscar Tabarez, will take advantage of Russia’s slow defenders through fast counter-attacks led by Suarez and Cavani to win the game’s three points and qualify for the Round of 16 at the top of Group A.

In Group B, the third round will see two strong matches at the same time, as Morocco will face Spain at Kaliningrad Stadium, while Iran will face Portugal at Mordovia Arena.
The Spanish team, led by coach Fernando Hierro, is looking to achieve a vital win over Morocco to qualify to the next stage, while the Lions of Atlas seek to present an honorable performance in their last World Cup game after they lost to Iran and Portugal and officially exited the tournament.

In the other game, it will be Iran’s last chance to qualify to the World Cup’s Round of 16 at the expense of Portugal, in the group’s second place with four points collected from defeating Morocco and drawing with Spain.

Portugal, supported by Cristiano Ronaldo who scored four goals so far, will try to settle the match in their favour to avoid the mathematical calculations that could knock them out of the group stage.

Spain top Group B with four points, while Portugal came second with the same score, Iran are third with three points, and Morocco are pointless at the bottom of the group.

Toni Kroos’ curler rescues Germany at the last against Sweden