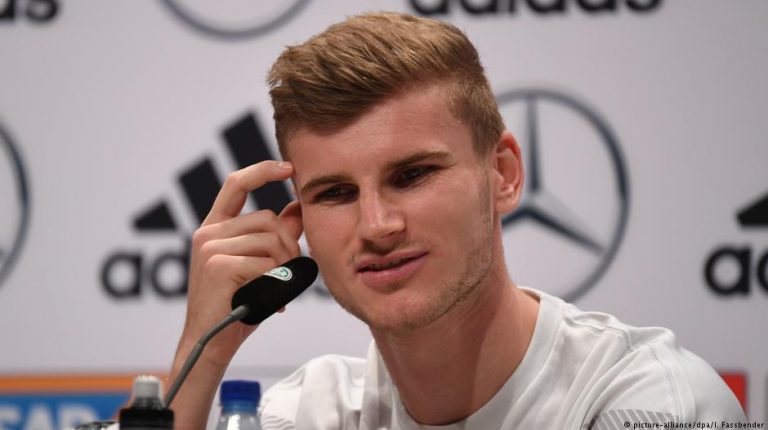 Germany’s leading striker has yet to score at the World Cup, but he has definitely arrived. Timo Werner is displaying early signs of becoming a leader.Too often footballers are judged simply by the numbers. On that basis, Timo Werner has made a woeful start to his first World Cup. The 22-year-old has not scored or assisted (officially), and hasn’t looked to be the solution to Germany’s striking problems he first appeared to be.

As so often is the case though, numbers only tell half the tale. Werner is already an established member of this team, even though the goals haven’t come yet.

“It would be nice to score, but progressing is more important,” Werner said at Monday’s press conference after the team had returned to their base camp just outside Moscow.

While the RB Leipzig striker has yet to show his scoring touch in Russia, his versatility, maturity and fight have been evident.

“Playing Timo on the left was a good move. You saw in that game what sets him apart. He can be a huge weapon,” teammate Marco Reus told reporters at Vatutinki.

Against Sweden, head coach Joachim Löw’s decision to move Werner out wide and stretch the Swedish defense proved a masterstroke.

“I’m a striker so I like prefer playing there but against deep-lying sides it’s sometimes better to attack with pace from a deeper position,” Werner admitted.

Smart, fast and ready to fight

The 22-year-old has already formed bonds within the team.

“We understand each other really well, whoever plays where,” Werner said of his on-field relationship with Reus. The striker also spoke of captain Manuel Neuer being a personality who emits a rare calmness, but Werner’s relationship with his direct rival best shows how far he has already come.

“He’s always the first one to come and talk to me and give me tips, “Werner said of Mario Gomez. “He’s very important for me.”

Werner’s decision to draw on Gomez’s experience rather than challenge it says a lot about the youngster. At 20, he became the youngest player to make 100 Bundesliga appearances. His maturity is beyond his 22 years, and his pace and skill in one-on-one situtations can be devastating. It was his cross that led to Reus’ equalizer against Sweden, and he won the free kick that led to Kroos’ winner. It’s no real surprise that he’s already Löw’s first choice as striker.

“I’m playing my first World Cup. I wouldn’t swap the feeling of walking out into a stadium [here] for all the money in the world. I’ve played in the Bundesliga and the Champions League, but this is incomparable,” Werner said.

Germany are hoping this tournament remains memorable for them too. If it does all end in disappointment and despair, then it will be worth remembering that Werner (like Reus) emerged as an unlikely leader.

“I had nothing left after I won the free kick. I couldn’t even make it to the celebration,” Werner said when asked about the dramatic winner against Sweden. “I lay there and was just happy.”

Indeed, the entire Germany camp is happy about the win. However, in the longer term, the rest of the team may be even happier about having Timo Werner leading from the front.