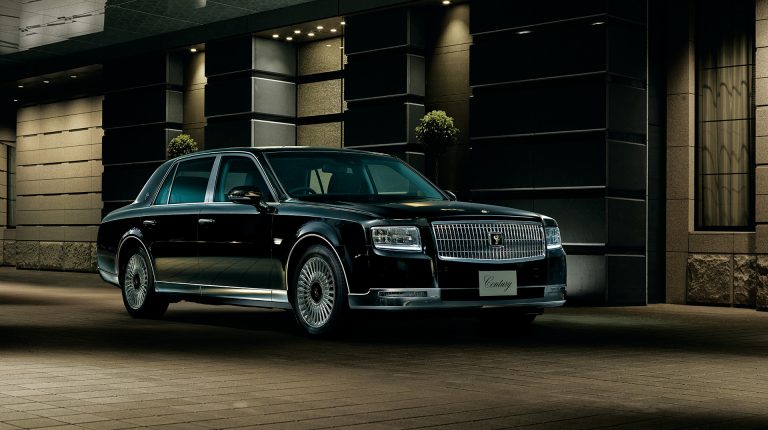 Toyota announced the launch of its completely redesigned third generation Century in Japan and the start of sales at Toyota dealers nationwide, with a monthly sales target for Japan of only 50 units, and it will be assembled at Higashi-Fuji Plant in eastern Japan.

The outline reflects the Japanese aesthetic of passive symmetry while employing a proprietary ideology that focuses on creating a regal rear seating space.

The silhouette is easily recognisable as a chauffeur model, by straightening the slope of the C pillar, the design focus of the cabin shifts to the rear, heightening the importance of the rear in appearance.

Heritage prevails in the phoenix emblem, carefully engraved over a six-week period by a craftsman. The unmistakable emblem portrays the vibrant movement of the wings and delicate feathers, while the grille serves as an ornate backdrop, featuring an infinite loop crown pattern that exudes a dignified panache.

An increase of 65 mm in the wheelbase creates a more spacious rear seat and ample leg room. The height difference between the scuff plate and floor has decreased by 15 mm to ensure the floor mats lay flat when installed. This also improves ease of entering and exiting the car. Also, the interior features wood trims to create a distinct rear seating space, with a raised ceiling design and exclusive fabric with a slanting lattice motif to create a refined, rich look.

The Century comes newly equipped with Toyota Safety Sense and also features a Blind Spot Monitor to detect oncoming vehicles in adjacent lanes, as well as parking support, which helps parking by detecting surrounding conditions. It also features a Pre-Collision System (PCS), which helps prevent and mitigate collisions with vehicles and pedestrians ahead. A Lane Departure Alert (LDA) system uses a warning buzzer and display to alert the driver when the vehicle is about to deviate from its lane and the vehicle also includes an added steer assist capability, Radar Cruise Control (with all-speed tracking function) to help maintain proper distance from the vehicle ahead. Adaptive High Beam System (AHS) shields against excess light from preceding vehicles and oncoming vehicles, automatically turns the high beams on and off, and is equipped with a 24 LED light array on the side.

The manufacturer’s suggested retail price is $180,000.

The Century debuted for the first time in 1967, and was released to commemorate the 100th birthday of Sakichi Toyoda, founder of Toyota Group.

It is often used by the Imperial House of Japan, the prime minister of Japan, senior Japanese government leaders, and high-level executive businessmen. The Century is comparable in purpose to the Austin Princess/Daimler DS420, Cadillac Series 70, Mercedes-Benz 600, Chinese Red Flag, Rolls-Royce, and Russian ZIS/ZIL limousines.

The first-generation Century was available with only a V8 engine, the third Japanese sedan built post-war, at its introduction in 1967 until a full platform redesign in 1997. The second generation was only installed with a Toyota-designed and built V12, an engine unique to the Century, until 2018.