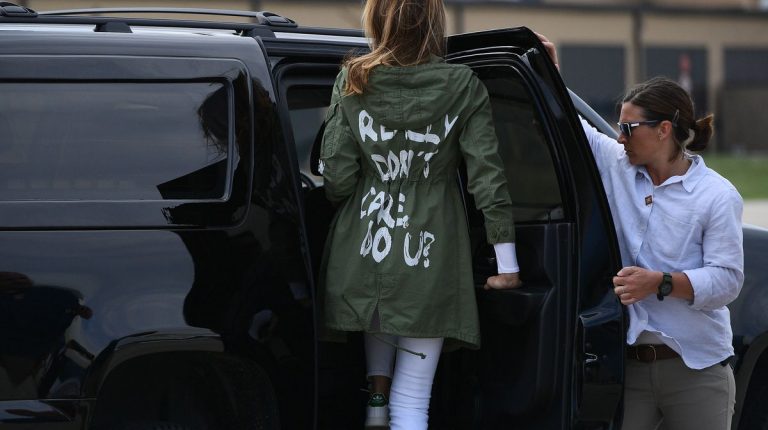 Fashion statements are often associated with celebrities—those who have captured various historical moments and political changes with their choice of wardrobe. Nonetheless, world leaders and their spouses have also been the focal point of many scrutinising fashion discussions.

The American first lady found herself at the centre of an enraged public campaign earlier this week due to her misled choice of garment while on official duty. Melania Trump sparked international uproar and viral media controversy, when she chose an eloquent $39 Zara jacket to visit detention centres on the Mexico-US border.

The army-green jacket blared the shocking words, “I don’t really care, do you?” which encouraged many activists and influencers to announce online that they did indeed care, unlike the first lady. Trump’s visit was a result of her husband’s earlier decision to reverse his policy to separate immigrant parents and their children at the Mexico-US border—gathering hundreds of heart-broken children at a caged detention centre without any documentation or clear plan to unite these families once again.

Being an immigrant herself, Trump was criticised for her shocking fashion statement as well as her decision to wear a Zara jacket—given the brand’s history of misconduct and illegal practices in terms of employment conditions.

The first lady, who is known to depend on a very limited number of staff and choose her own wardrobe, posted a video of her visit while wearing a cream safari shirt and white pair of trousers along with a caption regarding her visit, the condition of the detained children, and her hopes for US Congress to find a speedy solution. Meanwhile, her communications director, Stephanie Grisham, chose to address the cyber rage with an explanation.

“It’s a jacket. There was no hidden message,” Grisham said in a statement. “After today’s important visit to Texas, I hope the media isn’t going to choose to focus on her wardrobe—much like her high heels last year.”

On the other hand, the president was present on Twitter to defend his wife’s choice. Donald Trump had a very different explanation and point of view, describing her jacket as a message directed towards fake news. “‘I REALLY DON’T CARE, DO U?’ written on the back of Melania’s jacket, refers to the Fake News Media. Melania has learned how dishonest they are, and she truly no longer cares!” tweeted the president of the United States.

This is not Melania’s first fashion-related crisis. Last year, she was also at the heart of a media debate due to her adamant decision to wear stiletto high heels when visiting hurricane survivors in Texas. Furthermore, her time at the White House started with a very public siege as the majority of American designers refused to dress her for public occasions—leaving her to depend on European designers, such as Dolce and Gabbana.