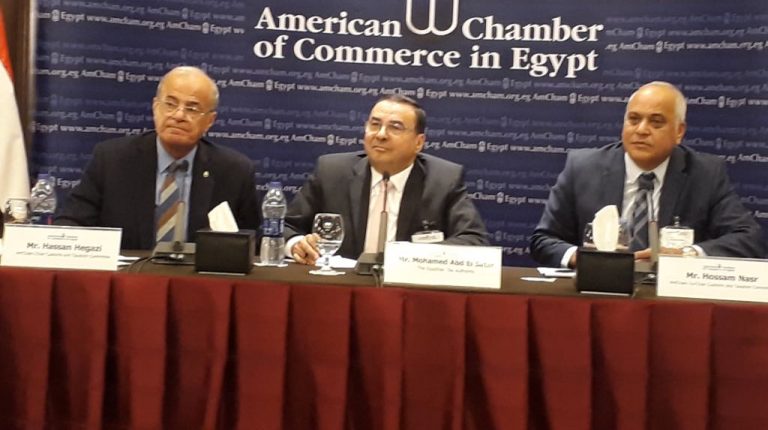 Mohammed Abdul Sattar, deputy head of the Egyptian Tax Authority (ETA), said that the coming period will see a big boom in the reform of the tax administration, the automation of all checks and payments, and the submission of declarations, allowing the preparation of an integrated database of financiers.
Abdul Sattar said that as of 1 January 2019, the ETA will not accept any cash payments of more than EGP 5,000, the acceptance of paper checks will be stopped, and bank accounts will be dealt with, adding that the project to prepare e-bills will soon be completed, which will allow for the organisation of all financial transactions in the markets and the survey of the tax community.
This came during the meeting held by the customs and tax committee in the American Chamber of Commerce in Cairo headed by Hassan Hegazy, which was attended by a large number of members of the chamber and taxpayers of major companies.
Abdul Sattar said that the department has succeeded in achieving 100% of the tax revenue target for the current fiscal year 2017/2018, whether in income tax or value-added tax, and it has completed the examination of more than 4,000 requests for refunds of the tax, in addition to answering 22,000 queries.
On the law of settling tax disputes, he said that EGP 16bn have been collected since the law came into force and that 80% of the cases resolved were in the last week of the general period specified by the previous law. This motivated the ministry to study shortening the legal period of the current law to four months, down from two years.
Responding to the questions of the attendees, Abdul Sattar stressed that all cases that are submitted to settle tax disputes are examined regardless of the value of the tax, as the ETA is fully aware of the importance of this matter to create an investment climate.
He pointed out that disputes for oil companies were settled after agreeing with the Egyptian General Petroleum Corporation (EGPC), identifying exempted activities, and the situation of the subcontractors dealing with these companies.
He said that the tax accounting principles are currently being prepared to deal with Uber and Careem after their conditions have been formalised under the recently issued Land Transport Law, and there is a six-month period to reconcile them.
He said that the Ministry of Finance started opening the e-commerce file and selling through the internet, in addition to how to collect stamp tax on internet ads, noting that committees are studying this file to see the need of issuing new legislation or amend existing laws to subject them to tax.
Topics: American chamber of commerce Egyptian Tax Authority ETA taxes