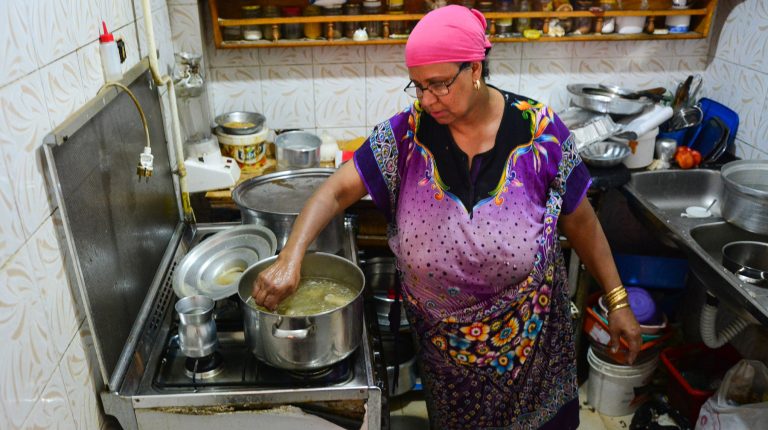 The role of an Egyptian woman in the World Cup has not been limited to rooting for and supporting her national team, but it extended to include a role in organizing. Daily News Egypt spoke with the only female organiser of the host city volunteers (in Rostov-on-Don), whose name is Neivin Mamdouh.

Mamdouh graduated from the Faculty of Al-Alsun of Ain Shams University in 2015, then worked as a translator.

After that, she decided to travel to Russia to complete her studies there at the Southern Federal University. And because she became more experienced with Russian cities and milestones, she volunteered to serve the fans when they visited for the World Cup.

How did you apply to be one of the organisers of the World Cup?

I have good experience in organising as I participated in organising many events so I was interested in applying for organising the World Cup since I saw the announcement for the volunteers on the FIFA website. But unfortunately, they didn’t reply whether I got accepted or not.

After that, when I travelled to Russia to complete my studies there, I heard about volunteering in the World Cup through the host city volunteers.

I should mention that there are two kinds of organisers in the World Cup: the organising committee which is represented by the FIFA, while the second is the volunteers of the host cities.

What are the differences between the organizsers of the FIFA and the volunteers of host cities?

Moreover, the FIFA gave all the organisers, the FIFA and the host city volunteers, training in October on how to deal with people from different countries, how to deal with fans with disabilities, how to encounter sign language, how to organise fans’ entry and exit to the stadium, to help them with transportation and emergency situations, and transfer them to places where there are large screens to follow the matches.

What was your role in organising the World Cup?

Concerning my role, it is to, first, welcome people at the airport, then guide them to the roads, translate for them at police stations, hospitals, etc, as I speak four languages which are Arabic, English, Russian, and Polish.

What was the Russians and the fans’ feedback when they saw an Egyptian female organiser in the World Cup?

What were the obstacles that you faced in organising the World Cup?

To be honest, I didn’t face any obstacles while organising the World Cup. On the contrary, I was welcomed warmly by anyone who learned that I am an Egyptian.

Even the Russians always appreciate my volunteering work as most of them don’t speak English.

In your opinion, how did you benefit from this event?

Furthermore, being in the heart of an international event like the World Cup is something that will always make me proud.

Are you interested in watching and following matches in general?

No, in general, I am not interested in watching matches, but I watched all the matches of the national team and rooted for Egypt, to the point that I found myself, without knowing it, crying when Uruguay scored a goal against Egypt in the first match.

I got depressed when Egypt exited the World Cup. There were some Muslim Russians supporting and rooting for Egypt and they also got sad.

You mentioned that it is not your first experience in the organising field. Can you tell us in depth what events you participated in?

I participated in organising many events, local and international, most notably, the opening ceremony of the 2016 African Handball Championship, Egypt’s National Youth Conference in February 2016, the Egyptian National Youth Conference in January 2016, the second international Egyptian-Russian student conference as one of the organisers of the Egyptian-Russian Fund for the Support of Science and Culture in September 2015, and organising the opening ceremony of the new Suez Canal in August 2015.

Did you face any obstacles at home because of being a female and travelling abroad alone?

Never, my father and mother are different, they always support and encourage me to travel and try new experiences.

Moreover, this is not the first time I travel abroad alone, as I obtained a fellowship from the Polish embassy and travelled to Poland after finishing my second year in college.

Germany pay the price for their complacency

World Cup 2018: No shocks in Group E as Brazil and Switzerland qualify for last 16