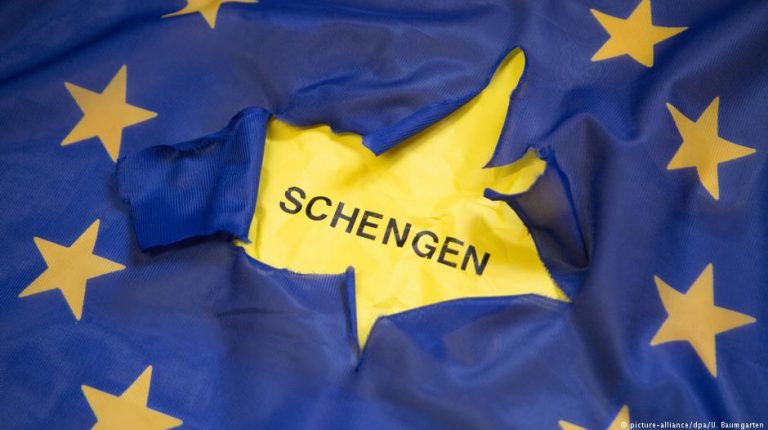 Europe owes its open borders to the Schengen Agreement, which allows cooperation and free travel through 22 out of the 28 EU member states. How has the agreement contributed to a united Europe — and will it survive?Early days

The idea to remove all obstacles to the free movement of persons, services and capital between EU member states was already part of the 1958 Treaty of Rome.

In July 1984, German Chancellor Helmut Kohl and French President Francois Mitterrand negotiated the Saarbrücken Agreement to dismantle border controls between the two countries. A few weeks later, both countries introduced green car stickers that allowed drivers at the border to declare that they had complied with all customs regulations. Those travelers were then only subject to spot checks, and cross-border controls became more relaxed. In police jargon, the word “Kowaz” was coined, an acronym of the German phrase: control without waiting time.

The relaxed border restrictions at the German-French border made the three Benelux countries (Belgium, the Netherlands and Luxembourg) sit up and take notice. In a memorandum, they also declared their intention to participate in the Saarbrücken Agreement. That wish was fulfilled, eventually becoming the Schengen Agreement.

On June 14, 1985, the borderless zone was sealed at a symbolic place in the small town of Schengen in Luxembourg, at the point where the borders of Germany, France and the Benelux countries meet.

Although the first agreement only involved a handful of countries, other EU members also began to benefit, with their citizens enjoying the same preferential treatment at the borders within the Schengen Area as citizens of the signatory states.

In addition to immediate changes, the convention, informally known as Schengen I, also held medium- and long-term goals. The Schengen II agreement regulated, among other things, the competences of the national police authorities in the Schengen Area and formed the basis of a common information system for security authorities.

That agreement also led to the closing of checkpoints on the internal borders of the Schengen Area on March 26, 1995.

By then, Italy, Spain, Portugal and Greece had already signed the Schengen Agreement. Shortly afterward, Austria, Denmark, Sweden and Finland, as well as two non-EU countries, Iceland and Norway, decided to join.

In 1997, the Treaty of Amsterdam integrated the Schengen Agreement into EU law, meaning it would also apply to future EU members. Until then, the island states of Ireland and the United Kingdom hadn’t been involved; they agreed to the new treaty but insisted on exemptions, continuing to carry out their own border controls.

In 2007, new EU members Estonia, Latvia, Lithuania, Malta, Poland, Slovakia, Slovenia, the Czech Republic and Hungary joined the Schengen Zone. In 2008 and 2011, the Schengen Area was extended to include non-EU countries Switzerland and Liechtenstein.

EU members Bulgaria, Croatia, Romania and Cyprus are to be admitted to the Schengen Area as soon as they have fulfilled all the conditions.

Schengen underwent its first reform in 2013. After refugee movements on the Mediterranean increased in 2011 following political upheavals in North Africa, EU states further north, such as Germany, pushed for a regulation that would allow temporary border controls at Schengen internal borders. As a result, the EU introduced an emergency mechanism that allowed states to unilaterally control their borders for a maximum of two years at a time.

Some countries, including Germany, Austria, Denmark, France and Bulgaria have made use of this regulation since the start of the refugee influx in 2015. In addition, Hungary and Slovenia have erected fences at their Schengen external borders, and Austria has even fortified a short section of its internal border with Slovenia.

Although the number of newly arriving refugees has dropped significantly since 2015, some politicians, including German Interior Minister Horst Seehofer, have increasingly questioned the policy of open internal borders.

“Controls at internal borders must be carried out until the EU is able to effectively protect and control the external borders,” he recently said. “For the foreseeable future, I don’t see it succeeding at the moment.”