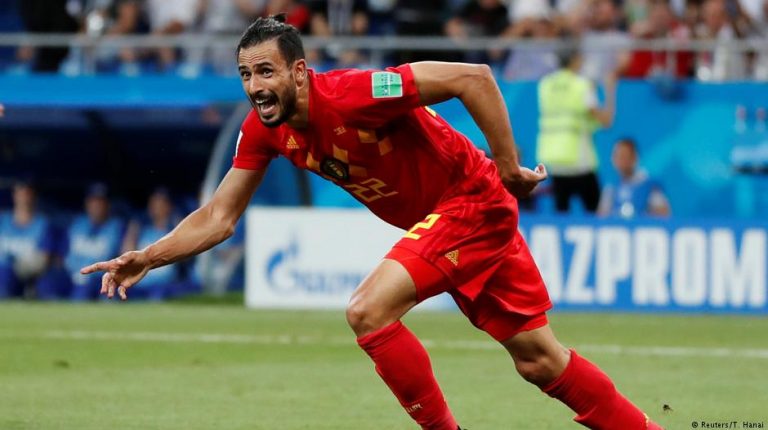 In an enthralling contest, Belgium have come from three goals down to defeat Japan 3-2. Nacer Chadli scored the winner with the last kick of the game, sending the Red Devils into the quarterfinals and Japan crashing out.Belgium 3 – 2 Japan — Round of 16

Belgium have long been touted as a ‘dark horse’ in international competition, but have always fallen at relatively easy hurdles. Their comeback victory over Japan, however, shows this team might have the resolve to fight their way to a title.

After falling two goals behind to the Samurai Blue, the Red Devils used their height to drag themselves from the brink of elimination. Jan Vertonghen and Marouane Fellaini converted headers from set pieces, before Nacer Chadli sealed victory in the final minute of play.

Japan, however, came agonizingly close to causing yet another upset at this unpredictable World Cup. They had been second-best in the first period, with Belgium dictating play and pushing their opponents back for large spells.

But Japan came out a different and determined beast following the break, the opener coming from a simple passage of play after 48 minutes.

Japan won possession on the edge of their own area and streamed quickly upfield. Gaku Shibasaki’s through ball evaded Jan Vertonghen and Genki Haraguchi composed himself to slot past Thibaut Courtois.

Belgium, still in shock, were soon two goals behind. Shinji Kagawa controlled a high ball close to Belgium’s penalty area, drawing the attention of his opponents before laying off for Takashi Inui. The 1.69-meter-tall (5 foot 5) playmaker had too much space and calmly but emphatically fired an unstoppable effort into the far corner.

Roberto Martinez responded by throwing on Fellaini and Chadli, as Belgium looked to use their height to cause Japan problems. Goalkeeper Eiji Kawashima has been a weak link for Japan — though he did make a string of good saves — and he was at fault for Belgium’s first.

He flapped at a corner before the ball found its way to Vertonghen, the defender somehow looping a 15-yard header from an acute angle over Kawashima and into the net after 69 minutes.

Five minutes later, it was 2-2. Marouane Fellaini latching onto an inch-perfect cross from Eden Hazard.

Both teams continued to press for the winner as extra-time neared and the attacking mindset would cruel Japan’s chances of a remarkable upset.

Pushing for the winner from a corner, Japan were caught out by a blistering counterattack launched by Courtois and led by Kevin De Bruyne. Thomas Meunier – one of Belgium’s best — delivered the decisive cross, Chadli on hand to stroke home past Kawashima and seal an incredible comeback win for Belgium.

The Red Devils will now face Brazil in the quarterfinals.

Relive the action as it happened below:

FULLTIME: Japan were absolutely unreal in that second half, blitzing through Belgium to take a shock two-goal lead. But Belgium’s height shone through, as they scored two headers to level the scores. Japan continued to press hard and attack, and it proved their downfall as Nacer Chadli converted the winning strike from a counter-attack.

90 +4′ GOOOOOOAAAAAL! Incredible. Belgium counter from Japan’s corner, with Courtois quickly rolling the ball to De Bruyne. He releases Meunier on the right, who whips in a low cross, Lukaku leaves (or misses) and Chadli is free to stroke the ball home. What a topsy-turvy match.

90 +3′ Honda with a cracking free-kick, sees his long-range effort tipped around the post by Courtois. Japan have been immense in this second period.

90′ Courtois forced to tip around his post after Witsel deflects a cross towards his own goal. Late corner for Japan here, four minutes added time to play.

87′ And another save! Vertonghen letting loose from range, Kawashima parrying once again. Fellaini is called offside as he tries to reach the rebound.

86′ Kawashima makes an incredible double save! First from substitute Chadli and then Lukaku, both headers, both parried away. You feel Lukaku should have done better with his chance, he’s not had a great game.

83′ CHANCE! Honda latches onto a lovely slided pass into the box, but shoots wide.

81′ Double change for Japan now. Yamaguchi and Honda comes on for Shibasaki and Haraguchi.

78′ Lukaku has a chance now but directs his header off target.

75′ Japan are still looking dangerous. Inui finds space in the box but sees his shot blocked. What a match, end to end stuff!

74′ EQUALIZER! Eden Hazard steps up when it matters, swinging in a peach of a cross. Fellaini, thrown on for his height, finishes the job and heads home.

71′ Not taking anything away from Vertonghen, it was a great, looping header from a tight angle, 15 yards out. But Kawashima was in all-sorts.

69′ GOAL! Bizarre goal. Kawashima proves Japan’s weak link once again. He flaps at a cross, which is then half-cleared, before a looping header from Vertonghen somehow finds its way into the corner of the goal. Kawashima looked as if he thought it was going out!

68′ Lukaku sees another effort blocked by a desperate Yoshida. This time from six yards out! Incredible defending.

65′ Double change for Belgium as they go for broke, they need something. Marouane Fellaini and Nacer Chadli on for Dries Mertens and Yannick Carrasco.

64′ This picture of the Japanese celebrating is brilliant. What an upset this would be, they weren’t even tipped to get out of their group!

62′ CHANCE! Lukaku should have given Belgium a lifeline but he’s somehow directed his header wide. He was only four yards out or so. Great delivery from the right by Meunier, too. Insane.

55′ Superb work from Kagawa in the lead-up to that second goal. Brought the ball down, demanded Belgium’s defenders’ attention and laid it off to Inui to work his magic.

52′ GOAL! Japan are two goals up! And what a hit it was from Inui. Belgium gave him far too much space on the edge of the box and he’s smashed it into the net past Courtois. Unbelievable.

50′ POST! Hazard hits a curler from the edge of the box but the ball rebounds straight back off the post. Big chance for Belgium to get back on level terms!

48′ GOAL! Haraguchi gives Japan the lead! Belgium lose possession high up the pitch but Japan launch a quick counter-attack. Jan Vertonghen failed to cut out a through ball from Shibasaki and Haraguchi latched on and finished with aplomb. 1-0!

Comment: Belgium should be in the lead, despite Japan defending stoically and keeping Belgium largely contained to half-chances. But Lukaku should have had a penalty, Yoshida shoving him in the back just as he was about to connect with a cross from Mertens. The second half is about to come, but it seems like only a matter of time before the Belgians break through.

HALF-TIME Plenty of pressure and chances for Belgium, but they haven’t been able to convert. Japan have been pegged back, but have still offered a threat going forward and are defending resolutely.

45 +1′ Mertens hits a curling effort towards goal after Lukaku’s touchdown. But it’s too weak and easily claimed by Kawashima.

44′ CHANCE. Courtois fumbles a weak Osako shot, the ball bobbling behind him and towards the goal-line. But there’s nowhere near enough momentum, giving the keeper all the time to pounce on the ball and save face.

40′ YELLOW. Shibasaki enters the referee’s book after taking down Hazard. The Chelsea forward is really causing havoc everytime he picks up the ball.

36′ Hazard shimmies at the edge of the box but can’t get his shot past the chest of Yoshida, while the less said about Witsel’s follow-up the better.

31′ Great play from Japan as Kagawa takes the ball inside the box, backheels for Nagatomo, who sends in a cross. Inui jumps high to get on the end of it, but it’s an easy save for Courtois. Encouraging stuff for Japan after being pegged back for the last 20 minutes.

28′ Kompany connects with a De Bruyne free-kick at the far post but his aerial effort goes across goal rather than towards it. Belgium really turning up the pressure here.

27′ Kawashima parries away a stinging effort from Hazard. Japan pretty much have nine men parked inside their own box. A goal appears imminent for Belgium.

25′ CHANCE! Mertens delivers a peach of a ball into the box, but Lukaku can’t connect from close range. Looked like he was pushed in the back by Japanese defender Yoshida at the decisive moment though. No VAR. Strange.

21′ Lukaku again finds space, this time with his head towards goal on the edge of the box. But his shot once again finds a Japanese body in its way – this time Nagatomo.

17′ Lukaku twists and turns in the box after bringing down a cross. The burly striker gets his shot away but it’s deflected by Hasebe for a corner – which comes to nothing. Belgium definitely growing in dominance here.

14′ Japan defend resolutely against a Belgian attack, they’re well organized but also offering their own going forward. Everytime Eden Hazard picks up possession, however, you feel the Japanese defenders tense up.

10′ Down the other end, Kompany shows his class with a solid defensive header. His presence in this backline makes it look like a formidable wall for the Japanese.

9′ Carrasco has space on the edge of the box but fails to pull the trigger. Attack breaks down with the forward penalised for a foul. Couldn’t get the ball out of his feet.

2′ First meaningful attack comes from the Japanese, Shinji Kagawa going close with an effort from the edge of the box which whizzes past Courtois’ post!

1′ They’re away, Belgium kicking off in their home red strip. Japan in their traditional blue kit.

19:56 National anthems have been belted out and we’re just moments away from kickoff!

19:45 And Japan have also rung the changes after coach Akira Nishino rested many of his stars against Poland. Shinji Kagawa, Yuya Osako, and Takashi Inui will be hoping to give them some bite in attack.

19:40 Belgium have made 10 changes to their starting lineup, with coach Roberto Martinez reinstalling his strongest XI after resting them for the 1-0 win over England.

19:30 With kickoff just 30 minutes away, here’s where to find out the latest ahead of tonight’s clash between Group G winners Belgium and Group H runnersup Japan.

In the meantime, here are a few match reports from the teams’ last group games, as well as Brazil’s Round of 16 victory over Mexico, for some pregame reading.

Japan squeeze through Group H thanks to fair play