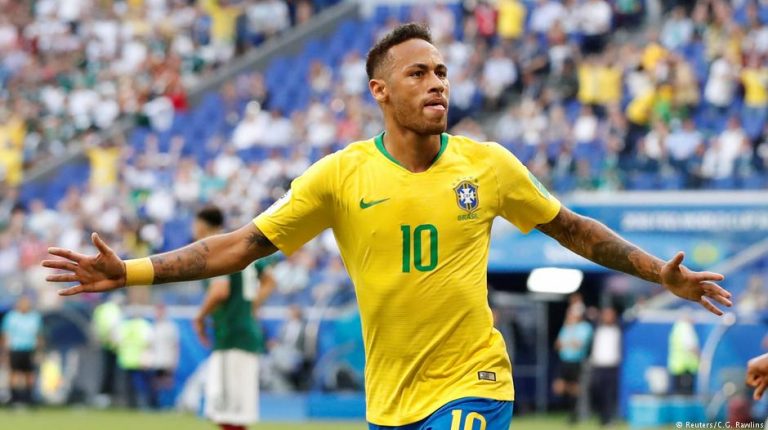 Neymar scored a goal and set up another as Brazil dispatched Mexico in the Round of 16. The five-time World Cup champions await either Belgium or Japan in the quarterfinals.+++Refresh the page for live updates (all times in CEST)+++

Brazil reached their seventh consecutive World Cup quarterfinal on Monday, dispatching Mexico in Samara Arena on the back of a stellar performance from Neymar.

The Brazilian superstar put the five-time champions ahead shortly after the halftime break before helping set up a second from Firmino in stoppage time.

The result is Brazil’s third consecutive 2-0 victory and the third straight game Neymar has been involved in at least one goal.

Neymar spent most of 2017 recovering from a foot injury he picked up in February while with Paris Saint-Germain. But the 26-year-old forward has proven his fitness at the World Cup, bagging a goal against Costa Rica and setting up another against Serbia in the group stage.

His goal on Monday came after a terrific combination with Willian. Neymar back-heeled the ball to Wilian at the top of the penalty area before Willian broke to the left and towards the goal line. The 29-year-old forward then crossed the ball towards Neymar at the far post, and the PSG forward slid and tapped the ball in.

Neymar nearly scored another towards at the end of the game. Fernandinho played him in down the left flank, and he fired a shot from point-blank range. Mexico goalkeeper Guillermo Ochoa parried it away, but Roberto Firmino, who had come off the bench eight minutes before, tapped in the rebound.

Brazil now await either Belgium or Japan, who were to face off in Rostov later on Monday, in the quarterfinals.

90+2′ Yellow card Guardado is booked for complaining to the referee.

88′ GOAL With his first touch of the game, Roberto Firmino doubles Brazil’s lead. Fernandinho plays a ball through to Neymar down the left wing. Neymar dribbles towards the goal line and crosses the ball to Firmino for an easy tap-in. Brazil 2, Mexico 0

86′ Miguel Layun puts in a cross from the right and Fagner heads it out for a corner.

83′ Thiago Silva is being attended to after a hard collision in Brazil’s half. He gets up under his own power before taking a lap around the field.

78′ Herrera switches the play to Lozano on the left. Lozano dribbles into the box and tries to cross from near the goal line. Fagner blocks it on a sliding challenge and the ball ricochets off of Lozano before going out of play.

75′ Willian steps over the ball before firing a shot with his weaker left foot from outside the box. The ball rolls towards the goal for an easy save for Ochoa.

71′ Miguel Layun steps on Neymar while trying to get the ball for a throw in, and Neymar squirms on the turf. Play is delayed briefly as trainers check the ankle region of Neymar’s right foot.

70′ Hector Herrera receives the ball near the goal line and crosses it towards dos Santos. Miranda clears the ball only as far as Guardado, and Guardado fires a shot through the legs of Paulinho. Thiago Silva blocks it and clears the ball away.

68′ Willian combines with Gabriel Jesus in midfield before jetting forward with the ball. He cuts back once he reaches the left side of the penalty area and passes the ball to Neymar in the middle. Neymar unleashes a shot with his weaker left foot, and Ochoa makes the save.

65′ Lozano is played through on the right side of the box and puts in a cross, but the ball crosses the face of goal before a Mexican player can get a foot to it.

63′ Willian dribbles into the penalty area fires a laser. Ochoa tips the shot over the crossbar. Brazil is dispossessed while trying to play the corner short.

61′ Vela hits a loose ball first-time, and Alison has to tip the ball over the crossbar. Guardado’s ensuing corner is cleared away, and Layun’s speculative effort from the right wing is caught by Alison.

59′ Yellow card Casemiro gets booked for a foul in midfield. He would be suspended for the quarterfinals should Brazil win the game.

59′ Huge chance for Brazil to double their lead. Fagner dribbles into the right side of the box and picks out a wide open Paulinho near the penalty spot. Paulinho his a shot first-time, but Ochoa parries the shot away.

55′ Yellow card Hector Herrera receives a yellow card for pulling Willian’s arm on a break forward. Herrera would be suspended for the quarterfinals should Mexico win the game.

51′ GOAL Neymar has put Brazil in front! He backheels a pass at the top of the penalty area to Willian, who dribbles towards the goal line. Willian puts in a cross from the left, and Neymar taps it in at the far post. Brazil 1, Mexico 0

50′ Lozano breaks forward with the ball and fires a curling effort, but the shot flies over the crossbar.

48′ Neymar plays a corner short to Coutinho. Coutinho dribbles into the penalty area and fires a shot. Ochoa hits it out for another corner, and Brazil is forced to reset.

47′ Gabriel Jesus receives the ball at the top of the penalty area and tries to get a shot away, but his effort is blocked.

16:57 Possession has been rather even: 53 percent for Brazil, 47 percent for Mexico. Mexico was controlling the tempo early before Brazil turned up the pressure.

16:50 Lozano had five dribbles in the first half, one less than Brazil’s entire team.

16:47 Brazil really came on at the end of the first half. They ended the period with 10 shots to Mexico’s five. Ochoa has made three saves in the game, and Mexico’s defense has blocked three others.

16:45 Lozano swapped to the left side of Mexico’s midfield after playing most of the game on the right. Osorio may be trying to take advantage of Fagner, who appears to be a step slower than Mexico’s attackers.

43′ Guardado hits the free kick into the penalty area but no one is there to get on the other end of it and Alison wraps it up.

43′ Yellow card Felipe Luis sees yellow for a hard challenge on Vela. Mexico lines up for a set piece…

41′ Willian puts in a low cross from the right wing, but Ochoa collects the ball before Neymar can get to it at the far post.

40′ Neymar hits the free kick just over the crossbar.

39′ Yellow card Alvarez goes into the book after a rough challenge on Neymar. It sets up a decent set piece opportunity for Brazil.

38′ Coutinho dribbles forward with the ball, cuts onto his right foot and fires an effort from outside the penalty area, but Ayala is in the away.

35′ After going 20 minutes without a shot, Brazil are applying more pressure. They have fired seven shots in the last 10 minutes.

34′ Countinho receives the ball on the break and fires a shot from outside the penalty area, but Hugo Ayala comes a cross to block the shot.

33′ Neymar dribbles into the penalty area and passes the ball to Gabriel Jesus. Gabriel Jesus dribbles to the left before unleashing a shot just outside the six-yard box. Ochoa makes the save and Coutinho’s follow-up is blocked away.

30′ Neymar tries to dribble towards the goal line again, but Alvarez slide tackles the ball away at the crucial moment.

27′ Philippe Coutinho fires an effort from outside the penalty area that flies over the crossbar.

26′ Edson Alvarez clears a shot from Gabriel Jesus near Mexico’s goal line. Ochoa punches the rebound away before Casemiro can get a head to it.

25′ Neymar dribbles around two Mexican defenders towards the goal line. He fires an effort towards the far post, but Ochoa saves the shot with an outstretched arm.

22′ Vela picks out Andres Guardado at the top of the penalty area. He dribbles around Miranda, but Casemiro slides over to block the shot.

18′ Vela switches the play to Hirving Lozano on the right side of midfield. Lozano tries to dribble past Felipe Luis and unleash a shot, but the veteran Brazilian midfielder steps in to block the effort.

12′ Hirving Lozano is mostly operating on the right side of Mexico’s midfield. He mostly played on the left of Juan Carlos Osorio’s formation in the Group Stage. Vela, who played much of the group stage in a central role behind Chicharito, is playing on the left flank.

11′ Chicharito is played through on the left and tries to take on Miranda one-on-one. Miranda disrupts the Mexican striker’s progress despite falling to the turf and Thiago Silva clears the ball away.

9′ Carlos Vela uses his pace to dribble around Fagner, but the Brazilian defender clears it for a corner. Salcedo heads the ensuing corner towards goal and Chicarito collides with Alison as Alison tries to make the save.

4′ Neymar unleashes the first shot of the game. Guillermo Ochoa has difficulty collecting it but eventually does before a Brazilian player could get to it.

3′ Javier “Chicharito” Hernandez and Carlos Salcedo are debuting new bleach-blonde haircuts. They are difficult to recognize on the field without that information.

15:48 Mexico hasn’t qualified for a World Cup quarterfinal since they hosted the tournament in 1986. Brazil hasn’t missed out on the quarterfinals in 32 years.

15:43 Here are the lineups this evening…

15:35 Mexico has already had an eventful World Cup. They defeated Germany 1-0 in their first group stage game and progressed to the knockouts despite losing to Sweden 3-0.

15:28 The last 16 continues as Brazil face Mexico in Samara Arena. Brazil is trying to avoid a similar fate to other World Cup favorites such as Spain and Argentina.