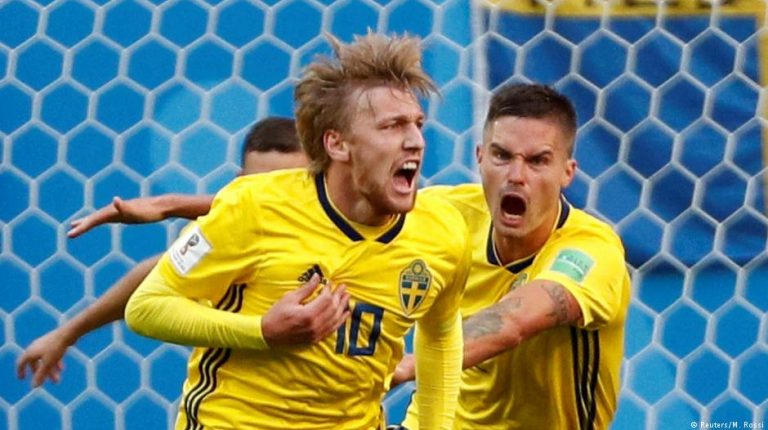 A deflected goal put Sweden into the World Cup quarterfinals for the first time since 1994. Switzerland huffed and puffed but couldn’t blow down Sweden’s defensive wall.Sweden 1-0 Switzerland — Round of 16
(Forsberg 66′)

A deflected goal in a tight and tense game was enough to keep Sweden’s magical World Cup adventure going, as Switzerland paid the price for a lack of urgency in the final third.

A close first half saw Yann Sommer pull of a great save to deny Marcus Berg as Sweden missed a hatful of half chances. Spurred on by Xherdan Shaqiri, Switzerland were persistent but struggled to find quality end product to really test Swedish keeper Robin Olsson.

Eventually, Sweden made it count when RB Leipzig’s Emil Forsberg’s shot took a wicked deflection off Manuel Akanji to leave Sommer with no chance.

With minutes left, Haris Seferovic forced a save from Olson with a header, but it was too little, too late. Michael Lang was sent off after causing Martin Olsson to tumble as he bore down on the Swiss goal. Having initially awarded a penalty, referee Damir Skomina consulted VAR and changed the decision to a free kick. It was saved, but it mattered not as the final whistle was blown seconds later.

RESULT: Sweden beat Switzerland 1-0 to make the World Cup quarterfinals for the first time since 1994 and will face either England or Colombia.

90+4′ Ola Toivonen hits it, but Sommer saves! And that’s it! Sweden are through!

90+4′ VAR on this decision. It looks like the initial foul was outside the box. Martin Olsson stumbles towards the end. Could well be a free kick rather than a penalty here… And a free kick it is. No penalty.

86′ Switzerland launching a late, desperate attempt to get something here. It’ll have to be great to get past this Swedish wall…

81′ Shaqiri hits a cross just out of the reach of Drmic, and Olsen wraps it up.

80′ Shaqiri finds Embolo at the far post on a corner, but Forsberg blocks Embolo’s shot on the goal line.

71′ Sweden clears a free kick from Xhaka only as far as Shaqiri. He turns and fires, but his shot is deflected out for a corner.

70′ A decent effort from Rodriguez on his weaker right foot, but Olsen makes the save.

69′ Ekdal dribbles around Xhaka and has a go from range, but his shot flies over the crossbar.

68′ YELLOW CARD Granit Xhaka goes in the book for a foul in midfield.

66′ GOAL! Forsberg puts Sweden in front! He receives a ball from the left and dribbles to the top of the box. He fires a shot and Akanji deflects it past Sommer.

63′ Behrami fouls Emil Forsberg just outside the penalty area. Forsberg hits it into the wall with his free kick attempt before losing the ball over the goal line.

61′ YELLOW CARD Valon Behrami gets booked, which means he will be suspended for the quarterfinals should Switzerland win.

61′ Shaqiri sets up a shot for Xhaka, but the Arsenal midfielder whiffs in his shot attempt.

59′ Sweden waste a chance at the edge of the penalty area, passing it around before lobbing it out of play.

54′ Switzerland now surge forward, but Sweden’s wall, whether it be a block or a save or a tackle, stands firm.

50′ Forsberg beats the referee and two Swiss players, before another shot in the box gets blazed over. If Sweden could get their shots on target, this one would already be over.

Close but not much to report, other than Yann Sommer’s superb reflex save to deny Marcus Berg. Sweden have been wasteful, Switzerland hesistant and that’s why it’s 0-0.

45+1′ Switzerland flirt with having a late chance just before the break, but don’t quite make anything of it. That’s it for the first 45.

42′ CHANCE! Best chance of the game right there. Ekdal is unmarked at the back post and a great cross reaches him at the back post but he gets it all wrong and blazes over. Should have been the opening goal. Won’t want to watch that back.

41′ CLOSE! Down at the other end and Emil Forsberg nearly sends in a free kick. The resulting corner is cleared.

39′ CHANCE! Blerim Dzemaili gets on the end of a nice move and hits it first-time, in the box but it flashes just over. Head over it son! A good chance that…

36′ First corner of the game and it’s Switzerland’s. Former Bundesliga man Ricardo Rodriguez sends it deep, but Shaqiri’s shot is blocked. A wall of yellow denying the Swiss so far.

32′ Mikael Lustig is booked and will now miss the quarterfinal if Sweden do make it through.

29′ SAVE! Yann Sommer makes a great save to keep it at 0-0. Cross comes in and appears to hit Michael Lang’s outstretched elbow, but the play goes on and ends up with Berg firing a bouncing shot towards the back post. Sommer dives at full stretch to deny him. Brilliant reaction.

26′ Zuber heads over and then has another chance cleared away from him at the last moment. Sweden winning the noise battle in the stands, at least.

21′ Michael Lang intercepts and sends Shaqiri forward, but this time he can’t get control it fast enough and so when he does pass, it is long and hopeful. Switzerland looking the more likely to score at the moment.

17′ After that breathless start, the game slows for the first time. It’s tight and tense, as you’d expect a World Cup Round of 16 to be.

12′ Very end-to-end this one, but with no end product so far. Xherdan Shaqiri has made a bright start, whips in a cross that no one connects to.

8′ Sweden’s attack breaks down, and then Steven Zuber has a shot saved at the other end. Then Markus Berg spanks it well wide, before Albin Ekdal sends a dipping volley just over. An attacking start, but nothing on the scoreboard.

4′ A deep free kick from Sweden is headed towards the six-yard box, but cleared. A half-chance, but a bright start. Physical start too here in St. Petersburg.

15:56 Time for the anthems. Some strong string sections tonight. Less samba and more fine classical – all suitable to get those watching the World Cup in the mood.

15:27 Here are the lineups for this evening’s contest…