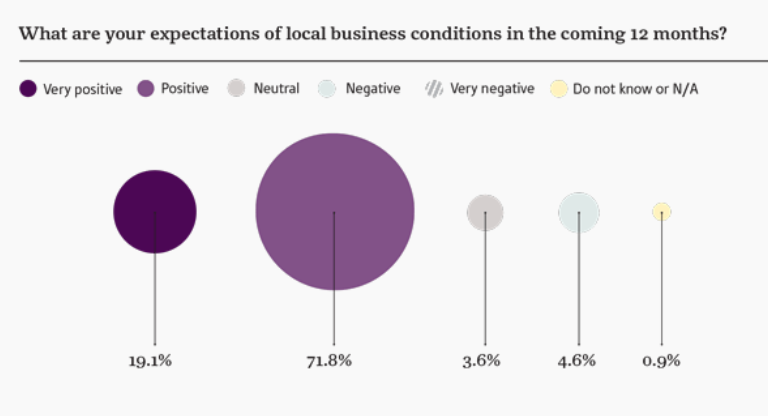 Oxford Business Group business barometer: Egypt CEO survey 2018 said that 91% of respondents have either positive or very positive expectations for the coming 12 months, up from 79% in OBG’s first Egypt CEO survey, released in early 2017.

OBG in a press conference on Tuesday released its business barometer, which noted that respondents with negative expectations accounted for just 4.5% of total responses, a considerable decrease from the previous survey’s 19.4%. This demonstrates a marked shift in business sentiment from just one year ago.

The barometer added that 75% of respondents said that the Egyptian pound flotation will have a positive or very positive effect on local business conditions.

Meanwhile, the report pointed out that one of pressing challenge Egypt will need to address is its persistent fiscal deficit, which is expected to reach 9.4% in fiscal year (FY) 2017/18, though efforts to rationalise subsidy allocation along with sound economic performance and political stability should help mitigate the effects of this.

“The results are overwhelmingly optimistic, with around 73% of respondents indicating the flotation will have a positive or very positive effect on local business conditions this year,” the report read. “In terms of overall GDP growth, 70% of respondents to survey forecast growth of between 3% and 5% in 2018, slightly lower than the IMF’s projection of 5.2%.”

The report pointed out that short-term expansion is set to benefit from the recovery experienced in the tourism industry and developments in the country’s burgeoning energy sector.

The report highlighted another important finding that testifies to improvements in Egypt’s attractiveness as an investment destination is that 70% of respondents said that the country’s current tax environment is either competitive or very competitive on a global scale, while just over half describe access to credit as easy or very easy.

The number of respondents reporting access as difficult stood at 33.6%; though still a relatively large share, by which it represents a decrease from 46.7% last year, according to the report.

The report elaborated that among the potential obstacles that could hinder economic growth, 65% saw an increased instability in neighbouring countries, as the top external risk in the short to medium term, followed by the rise in oil prices (17.2%).

Foreign currency reserves, in particular, have experienced a significant recovery, reaching $37bn by the end of 2017, their highest level since 2011.

OBG reached out to more than 100 C-suite executives from across all sectors of the economy, from mid-2017 to early 2018 to get their assessment of the outcome of the currency flotation, which took place in November 2016.