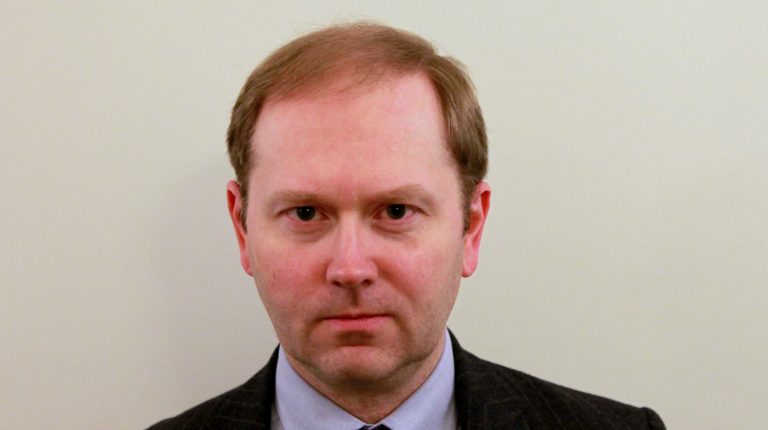 The economic counsellor of the US Embassy, Minister Counsellor Jim Boughner told Daily News Egypt that the possibility of a Free Trade Agreement with Egypt was last discussed between the two governments in May in Washington, DC, during the latest round of talks under the bilateral Trade and Investment Framework Agreement (TIFA). “We hope to continue these discussions,“ he said.

Daily News Egypt sat down for an interview with Boughner, the transcript for which is below, lightly edited for clarity:

Are there any updates regarding bilateral negotiations on limiting trade barriers?

The latest meeting under the  tTIFA took place in Washington, DC in May. It was a good meeting with substantive engagement between the two governments, including on issues such as agriculture, intellectual property rights (IPR), government decrees, and technical assistance.

What about interest of new American companies to invest in Egyptian market? What are main economic sectors that they pay attention to?

We know of various US companies interested in investing or reinvesting in Egypt. Some of these investments in the oil and gas sector or the agricultural sector will take place geographically close to the projects they support. Others will take place closer to the greater Cairo area.

How many American companies operating in Egypt? And latest estimations of their amounts?

There are over 1,200 US firms operating in Egypt, ranging from large petroleum companies like Apache Corporation to small services companies. Total US direct investment in Egypt is over $22bn.

What do you think of economic reform programme and its impact on Egyptian business climate?

As the largest shareholder in the International Monetary Fund (IMF), the United States has strongly supported the IMF’s Extended Fund Facility and the related Egyptian reform programme from the outset.

We view Egypt’s economic reforms as a positive and necessary step to restore macroeconomic stability, build up the private sector, and put the economy on a path to higher growth. We see Egypt’s attractiveness to foreign investors only improving as time goes by, as evidenced by the increased interest in mergers and acquisitions, initial public offerings, and foreign direct investment.

Notably, the Executive Board of the IMF approved on 29 June the disbursement of the fourth tranche of the IMF loan to Egypt worth $2bn, as part of the extended $12bn loan facility over three years, this brings the total of Egypt’s loan to $8bn, leaving the two parts of the third tranche to $4bn, according to a press statement by the IMF.

How do you assess New Investment Law and its incentives? How do American companies look at Egyptian market now?

We are encouraged to hear from investors that the New Investment Law offers a promising step forward towards improving the investment environment in Egypt, as it relates to attracting new investments, consolidating many investment-related rules, and streamlining procedures.

We are especially excited about the strengthened roles of the investor service centres and the streamlined dispute resolution process.

From your point of view, what are main problems that face American companies, and how to solve them?

International investors attach a high value to the government’s commitment to macroeconomic and structural reform, and they have responded positively to developments to date. Going forward, maintaining this commitment is important to sustain investors’ interest in Egypt’s capital markets.

Along with structural reform, investors are looking for other reforms, including the New Investment Law, industrial licensing procedures, and a revised bankruptcy code, to take hold and deliver positive benefits.

Delays or complications in reform implementation could be seen as an obstacle in investment. Foreign investors seek not only opportunities, but countries allowing for straightforward entry, exit of investments, a quick start-up, and shut down of business.

The United States remains concerned about some shortfalls in the enforcement of intellectual property rights, particularly with respect to the usage of pirated and counterfeit goods, including software, music, unlicensed satellite TV broadcasts, and videos, which represent barriers to US exports and investment. The US government continues to recommend that Egypt provides officials from customs with the authority to seize counterfeit and pirated goods at the border and establish a specialized body responsible for IPR protection.

What about visits of American business delegations to Egypt in 2018?

We understand that the American Chamber of Commerce in Egypt will host a delegation of some 50 American companies in October. AmCham’s President Tarek Tawfik led a very successful annual Doorknock Mission to the United States in March, that included 35 Egyptian and US companies.

I read that there were discussions to include ICT companies in Qualifying Industrial Zone (QIZ) agreement; what are latest updates on this file? Are there any upcoming meetings with Egyptian, Israeli officials regarding QIZ? When was latest meeting? What was discussed?

Egyptian and Israeli government participants in the QIZ agreement normally meet on a quarterly basis; the most recent meeting on the QIZ took place in Tel Aviv in early April.

What about cooperation between USAID and Egyptian governmental entities? What are main areas of cooperation? What are upcoming plans for next five years?

The USAID has a long history of partnering with the people of Egypt to build a prosperous future. On behalf of the American people, the USAID has invested almost $30bn in Egypt, over the last four decades, tangibly improving the lives and livelihoods of millions of Egyptians.

The USAID continues to work in partnership with the Egyptian people to increase access to economic opportunities, improve linkages between education and the private sector, and supplement social service delivery to make Egypt more prosperous for all.

The USAID’s portfolio is multi-sectoral with activities to ensure that future generations have the tools to succeed and actively participate in Egypt’s economic recovery. Current programming focuses on economic growth, including agriculture, entrepreneurship, tourism, and water.

The USAID’s existing and planned programming supports Egypt’s long-term Sustainable Development Strategy, constitution, macro-economic reforms agenda, and focus on the private sector is the engine of growth and job creation.

For instance, the USAID is helping the private sector to take advantage of commercial opportunities offered by a more competitive exchange rate. The USAID is also providing technical expertise to Egyptian officials to fully implement fiscal and monetary reforms, as well as reforms to improve the business environment that are necessary to trigger investment needed for an economic recovery. Finally, the USAID is helping Egypt’s youth to develop competitive job skills demanded by the market.

Moreover, Boughner told Daily News Egypt in March that a two-way trade between the US and Egypt reached $5.6bn in 2017, which is a 13% increase over 2016, noting that textile and petroleum sectors are the largest sources of Egyptian exports to the United States.

“Given the efforts that the Egyptian government has made to improve economic conditions, and the strong interest from US companies in doing business in Egypt, we are optimistic that the growth will continue and even accelerate,” said Boughner.

Israel continues to deny involvement in assassinations of Palestinian militants