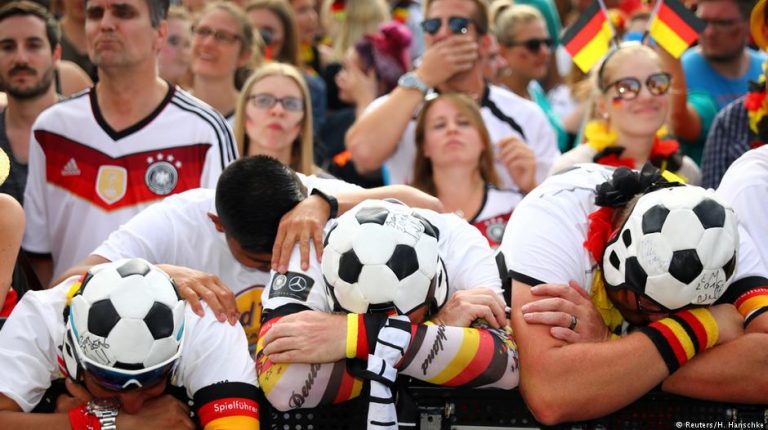 After watching their team exit in the group stages at the World Cup in Russia, Germany fans are now left with the unusual conundrum of what to do now. Go on that summer holiday sooner? Support another team?Now that Germany fans have had time to wipe away the tears and deal with the unusual feeling of seeing a World Cup quarterfinal bracket without their country, what do they do now?

Of course, life goes on – but, for the next 11 days, so does World Cup football. What are Germany fans going to do while the rest of the world jumps around in excitement and angst as the World Cup comes to a conclusion?

Of those who do stay and watch, is cheering on another team allowed? Well, according to the same survey, 41 percent said they wanted the next world champion to be from Europe. Clearly there aren’t many Germany fans sympathizing with Brazil, Uruguay or Russia then.

Time to cheer for England?

Unsurprisingly not many fans felt sympathy for Germany and their surprising exit. Schadenfreunde was high, as a mini survey by psychologist Lea Boecker from Cologne University revealed. Boecker asked 131 foreign fans, mostly from England, just two days after Germany’s exit from the tournament and found that glee at Germany’s exit was high. “Failure by people or groups with a high status who appear dominant” is one of the main causes for schadenfreude. Clearly, for some the underdog is preferred to the favorite.

Whoever wins, this summer has certainly gone differently to the way Germany fans would have hoped. Time will tell whether they’ll be any happier at the end of the tournament.