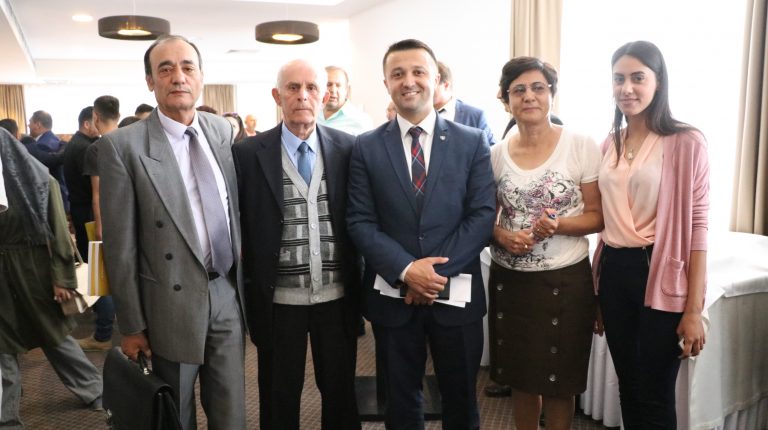 The Egyptian presence in the Balkan region dates back about 3,000 years ago, when Egyptians travelled to the Balkan Peninsula, during the prosperity and glory of the ancient Egyptian empire, during the iron revolution, at the time of the 19th Dynasty of Egypt. Descendants of some of those Egyptian migrants are still there, distributed across the states of the Balkan Peninsula. Since the 1970s, Balkan-Egyptians started to demand a separate Egyptian category to be added in official census statistics in their local nations. Daily News Egypt met with a number of members of the Egyptian community to tell us more about themselves.

Isa Osmani is an advisor of the prime minister of Kosovo, as well as a member of the Egyptian community. He said that he is started working for the community since he realised that he is Egyptian at 14 years old, and then he wrote his first poetry for Egypt, “Egypt forgotten land.”

Osmani had previously served in the United Nations, but he started working as a political advisor to the prime minister since October 2017 and his benefits for the community are increasingly being raised by dealing with various projects in the economic, educational, and business aspect, and helping veterans’ statuses.

“We have no marriage between the Albanian community and others. If you ask for the Ashkali community, we are the same people, but the Ashkalies were split because they did not accept the representative Qerim Abazi, who is an Egyptian, in Rambouillet at a great meeting in France that resulted with the NATO bombing in 1999. The Ashkali name comes from the Roma language, which means trash, which is offensive to us,” he said, adding, “Ashkali were divided for political interests. Now with the understanding of where we originate, we will convince them that they are our brothers.”

The deputy minister of education and higher education in Kosovo and member of the Egyptian community, Artan Berisha is studying for a master’s degree in political science and diplomacy. He said that education is very important for the people of Kosovo in general and for the Egyptian community, adding, “we are together working to have more educated people in our community as the only way to rise up; we will find with the government every possible way to help our community, and our first step to push the parents who made their kids leave school to return them back to schools to link the first level of education to the second one of the obligatory education.”

Artan said, “we are looking forward to at least one for every family of the Egyptian community to join the secondary school, but it depends on the economic situation of the family; for this we have a programme for supporting families financially. Also, we support students from different cities to accommodate in Prishtina.”

He told Daily News Egypt that until now, they have had a lot of problems because a lot of students do not continue the primary school, with only 30-40% of students of the Egyptian community in education in all levels. Ten years ago the percentage did not reach 10%. He referred this success to the efforts of the Egyptian Liberal Party of Kosovo.

Bashkim Krasniqi is the deputy minister of municipalities and local administration in the government of Kosovo and part of the Egyptian community. He said that he is helping the community through his position, and he protects their rights. He is in his position since seven months, and during this short period, he has visited mayors and municipality directors, who have reacted to solve the problems of the community. Krasniqi said that there are several municipalities for the Egyptian community.

Erlinda Osmani is a student at the obligatory level of education in Kosovo and belongs to the Egyptian community there. She said that 80% of her friends believe that she is Albanian, while only her close friends know that she is Egyptian. She added that there is racism in the society towards the different communities in the country, particularly among the uneducated people.

Osmani told Daily News Egypt that she is interested in learning the language of Egypt (Arabic), but she believes that Arabic is a difficult language. She knows a little about Egypt, like ancient Egypt, the Pyramids, and the new discoveries, which she has studied at school. She is not feeling good at school because she is the only Egyptian in her class, believing that it is not good to be different from the majority.

She likes Egyptian songs but does not remember names of Egyptian singers. She was also interested in the movie “Gods of Egypt”, which talked about the life of Prophet Moses in Egypt. She would like to visit Egypt very much and she wants to see the Pyramids.

One of the activists of the Egyptian community in Albania, Zhaneta Sali Veizaj, said that she has now been working for the Egyptian community for 26 years, since March 1992, when she was 35 years old, and she has been a community leader as well as executive director for her city, Vlora, at the first Balkan-Egyptian non-governmental organisation.

Her grandparents from both mother and father have always advised her since she was 10-years old that she came from Egypt. “In our extended family, all marriages have been made between Egyptians and not with other peoples from other communities,” she said. Speaking about the differences between the situation of the Egyptian community in Albania now and in the past, Veizaj said that in the beginning it was a hard start because few people admitted that they belong to the Egyptian community, because the Enver Hoxha’s communist system of those times had integrated all the people. “Nowadays, there are organisations and political parties that are introduced into the family and work with the community, which is increasingly discriminated against,” she added.

“In the entire state system and local government, we make a very small percentage of employees even though we have hundreds and thousands of people educated with bachelors and masters degrees. Egyptians have been recognised as an ethnic culture community, but from November 2017 with the new law of minorities, Egyptians have finally been recognised as a minority,” she explained. “The problem nowadays is that different segments (like BE or different NGO’s donors) don’t recognise us as a different minority, but are trying to blend us with the Roma minority.” The Roma derived from the city of Kanauxh, north of India, and they still speak a language similar to that city.

Robertina Ashouri is a unique person of the Egyptian community in Macedonia. She speaks different languages, including Arabic, as she has studied translation. To prove that she is Egyptian, Robertina recently conducted a DNA test, and the results proved that she comes from Egypt; she expressed happiness for the results. She is working on helping the refugees in Germany. Previously, through her organisation, she was helping Egyptian refugees from the Balkan countries during the years of war.