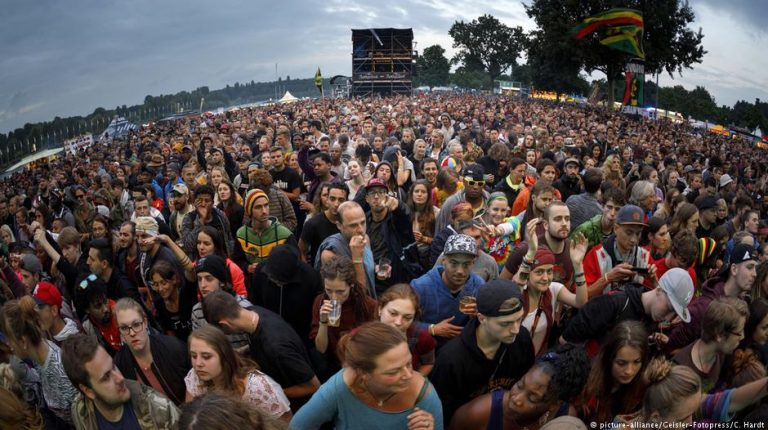 Summer is outdoor music festival time in Germany. From world music to hip-hop and head-banging to folk and reggae, there’s something for everybody — even concerts on an island in a lake!Outdoor music fans might have a hard time deciding where to head the first weekend of July 2018 — there are so many different festivals going on across Germany between July 6-8!

Punk in the sun

Ruhrpott Rodeo is a punk rock festival in Hünxe/Bottrop in western Germany. German band Feine Sahne Fishfilet, whose name roughly translate to the tasty-sounding “fine cream fish filet,” is one of the headliners sure to draw crowds to the former coal-mining region. Organizers are ecstatic about the weather forecast for the festival dates: sunshine, sunshine and more sunshine. On their website, they say that in 12 years of Ruhrpott Rodeo, never once has the festival drowned in rain.

“Is there some higher being in the universe that has a heart for punk rock?”

“There probably is,” they rejoice.

Concerts on a lake island

In Cologne, also in western Germany, Summerjam is one of the country’s biggest reggae and dancehall festivals. Headliners for its 33rd year are Gentleman, one of Germany’s best known reggage artists, and the rapper Marteria. Unlike in past years, 2018 concertgoers can now buy tickets to individual concerts along with day passes. Shows take place on an island in a small lake on Cologne’s northern outskirts.

Get lucky with a ‘Golden Ticket’?

Hip-hoppers will most likely head further east, to Splash near the small town of Gräfenhainichen in the state of Saxony-Anhalt. Headliners there: Casper, Cro and J.Cole. The popular festival is actually sold out, but organizers are raffling off what they call Golden Festival Tickets.

Rudolstadt Festival has stages featuring folk and world music all across this Thuringian town. It bills itslef as Germany’s biggest festival of those genres. The line-up includes top acts Graham Nash and Faber. This year’s country focus is on Estonia, which according to the Rudolstadt organizers “shows extraordinary creativity in all genres, be it hard rock or classical music, jazz or folk.” Estonia’s contemporary music scene is “doubtless the most vibrant and resourceful in the region, so we just had to add it to the program,” they add.

The hard rock and heavy metal festival Bang your Head!!! (BYH) in the southwestern town of Balingen opens a week later (July 12-14) with headliners Accept, Europe and Powerwolf. First held in 1996, BYH is one of the most prominent metal festivals in central Germany and draws an audience of thousands from all over the world.

Faster, harder, louder: This year, the ever-popular Wacken Open Air isn’t til next month (August 2-4). It calls itself the “biggest metal party of the year.” Headliners include Judas Priest and In Flames.