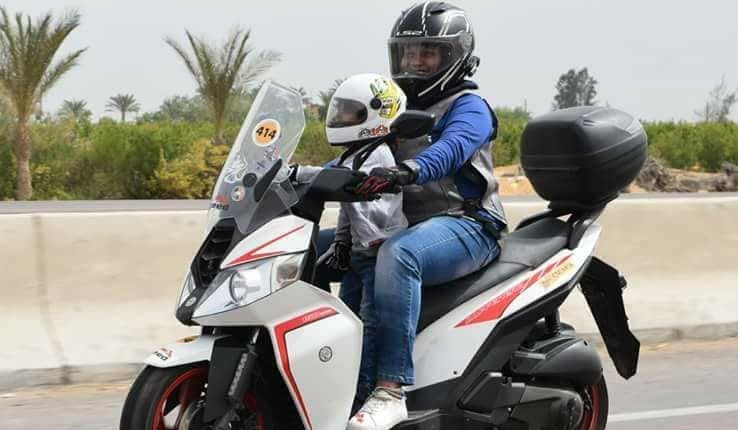 After the last rise in the fuel prices, every citizen in Egypt, thinks about the negative effect of this rise on  one’s budget for transportation, either to ride private cars, taxes, or even buses.

Egypt’s new government raised fuel prices by 35.0-66.6% in emid-June with an immediate effect. The price hikes are part of the government’s economic reform agenda agreed on with the International Monetary Fund (IMF).

Meanwhile, there are some girls, who think out of the box, changing their habits from driving, or taking public transport to riding scooters.

But the question remains whether riding a scooter is the best solution for Egyptian girls in facing the hikes of fuel price? What are the challenges that girls who ride scooters in Egypt face? Is riding scooters still considered a taboo in Egyptian society?

Daily News Egypt sat down for an interview with women who ride scooters to learn about their experience and know from them the benefits and challenges of riding one, in addition to interviews with different categories of the society to learn more about the degree of the society`s acceptance for seeing girls riding scooters, as traditions and customs still blame girls for sexual harassment and rape.

Basma El-Gabry, founder of “Girls Go Wheels,” campaign that encourages women to ride scooters and train new riders, told DNE that after every time the fuel prices in Egypt increase, it is offset by an increase in the number of people who demanded from her to give them scooter driving lessons, explaining that if the government estimated the increase in fuel prices by 30%, hence there would be an increase of more than 50% in the number of people who decide to ride scooters.

This means that the scooter consumes a quarter of the fuel consumption of the cars.

“In addition to that the regular maintenance cost of the cars is more expensive than that of the scooter,” El-Gabry asserted.

For her part, Laila Hussein, who rides scooters since 2015, told DNE said that her scooter’s fuel tank has a capacity of 8.5 litres, that allow her to move for about 200-230 km, noting that she pays about EGP 57, weekly to fill up the tank.

Hussein explained that her trip takes 25 km daily from Maadi area, where her home is located, and to her workplace in Mokatam, and vice versa. .

“On the contrary, if I take a bus, I will pay EGP 70 every week, and if I took my son with me the EGP 70 will be doubled to reach EGP 140, so of course riding a scooter is really cheaper than taking public transportation,” she continued.

Concerning the prices of the scooters, Hussein said that the prices of a brand new scooter start from EGP 19,000, while the used one starts from around EGP 10,000 or EGP 11,000.

Meanwhile, El-Gabry said that the prices  doubled four times more, in the last five years, mentioning that she bought her scooter five years ago for EGP 5,000, referring that the same scooter nowadays costs almost EGP 20,000, assuring that this means that there is a great demand on buying scooters.

Other benefits for a scooter

Hussein and El-Gabry agreed that the scooter has other benefits, avoiding sexual harassment that women suffer from in public transportation buses.

They also agreed that the scooter can also help in avoiding traffic congestion and overcrowding, in addition to its effective role in saving the time.

Moreover, Hussein referred to that the scooter parking is easier to find than that of the car.

What are actual challenges?

El-Gabry said that the actual challenges that they face is that, they do not have the permission to park in some places including, any mall and they cannot move in some places, for example, the Azhar Tunnel, demanding to provide more facilities for motorcyclists.

Globally, motorcycles can pass or move over the white lines on the ground.

El-Gabry and Hussein agreed that in Egypt the people do not commit with leaving these areas for motorcyclists.

For her part, Hussein complained also from those who chat while driving or not using the flashers while moving right or left, noting that this leads to many accidents.

She also called on the government to improve Egypt`s infrastructure, away from the pitfalls of non-mentor and sewers who are in the midst of road and away from cracking roads.

Was riding a scooter was considered as a taboo in Egyptian society five years ago?

El Gabry talked about her first time to think about riding scooters, saying that the whole thing started when she wanted to buy a scooter to go to university independently.

“Instead of waiting for my family members to give me a lift, I decided to learn how to ride a scooter,” she said.

She continued that her family did not approve at first, and then they agreed to let her buy the scooter.

She pointed out that her mother was so worried about her, to the extent that the mother drove her car, moving behind El-Gabry, witnessing reactions of people driving on the streets and assuring that no one will be bothering her daughter, because she is a female motorcyclist.

“My mother found out that no one is exposed to me and no one annoyed me in the street, the maximum thing that happened that people on the streets were surprised and wondering that they are seeing a female riding scooter, and since then my mother calmed down,” she said.

El-Gabry continued that five years ago, when she started to ride a scooter, the idea was not as widespread as it is now, noting that the most notable reason for its spread is the economic conditions, explaining that the number of people who ride scooters raised by more than 70% in the last five years.

El-Gabry explained that she suffered a lot of not understanding the prices of the scooters, how to drive a scooter, how to issue a driving license and an official license for the scooter.

To make it easier for other women, she decided to launch a community to provide women with information about riding scooters.

She continued that “Girls Go Wheels” initiative helped new riders to get information about safety procedures and get in contact with other women who are interested in riding wheels.

Meanwhile, Hussein said that she thought to ride scooter when she found that she took a lot of time on her journey to work every day, as she took public transport that stop at many destinations so it took around an hour or an hour and a half to reach her work, while if she took the road direct without stops she could reach the work in 15 minutes.

She agreed with El-Gabry that her mother at first was also worried about her and her son.

Her mother agreed to let her buy a scooter only after Hussein brought to her photos of other girls who rode one.

She assured that the number of the girls who ride scooters increased in the last five years, noting that it became a normal thing to see a girl riding a scooter.

Hussein said that the most thing that pleased her, while riding in the streets, the Egyptians or foreigners that encourage her even by a smile or by giving to her a road to pass with appreciation.

Many women may have known already the benefits of the scooter and still want to try it, but they are afraid from this step, due to the negative feedback and impressions that they are going to receive from all the people around them.

Despite that El-Garby and Hussein both agreed on that the scooters became not limited to men, however, Ahmed El Adly, who is 35 years old and works as a banker told Daily News Egypt that he would not accept to see a girl riding a scooter, noting that the girl who rides a scooter loses her femininity.

Meanwhile, Kamal Ahmed, who is a teacher said that he has a scooter and bought it after the last hike in prices, saying that his wife rides it also.

Ahmed continued that he is not worried that his wife rides it, as long as she is wearing the helmet, hence no one will know that she is a female, thus she avoids all kinds of harassments that she might face if she took any public transportation.

For her part, Nourhan Salah, who is a journalist, said that she in general has a fear of driving, but she likes the idea and she is always thinking of trying it.

Meanwhile, Nouran Ahmed, who is a student in Faculty of Mass Communication, told Daily News Egypt that she cannot ride a scooter as it is always followed by many accidents and harassments.

Furthermore, Hend Ali, who is a student in Al-Alsun faculty agreed with Ahmed in the two aforementioned points.

Responding to these fears, Hussein and El-Gabry agreed on that wherever the girl is, she can face harassment.

Concerning the point of the accidents, both agreed that the most important thing to avoid the consequences of the accidents is to wear all the safety clothes including the helmet, safety gloves, safety jacket, etc.

Finally, the scooter is a double-edged weapon like anything in the world, that has benefits and disadvantages, but only you who can decide to use it or not, according to your assessment of the disadvantages and how it will negatively impact you.

But the thing that all people agreed on is that the scooter is considered one of the cheapest means of transportation after the bike.