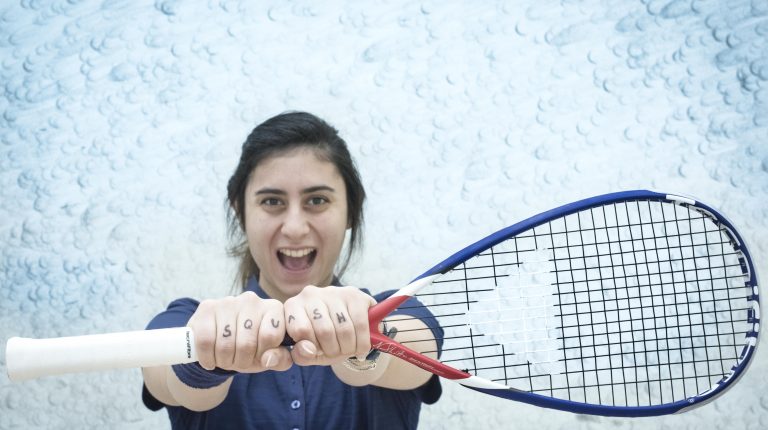 “The most difficult part is staying on the top,” said Nour El Sherbini, the Egyptian squash player who has ranked as world’s number one in the PSA Women’s World Rankings, which was released last Sunday.

The 22-year old athlete is already the fifth-longest serving as world number one in history. Last month she had a successful season with victory over world number two, Raneem El Welily, in the ATCO PSA Dubai World Series Finals title decider.

Alexandria-born El Sherbini is one of the most powerful female players in the PSA World Tour. She made history at the two most prestigious tournaments, the World Championship and British Open in her short career.

“Following each victory I claimed, I feel more confident, saying to myself that all my efforts paid off.”

El Sherbini, 22-years-old, was born and raised in Alexandria, started playing squash at an early age at six. Her brother and coach, Omar El Sherbini, stands behind her passion towards squash.

“Omar was a real backbone. He kept supporting me as well as my parents to reach high levels in my professional career till this very moment,” said El Sherbini, adding “they offer me all I need and accompany me in each training or tournament.”

El Sherbini became the youngest World Junior Champion, when she claimed the title at 13-years old. Commenting on that she said “at that time, I realized that squash is my life. Winning the title was a turning point in a very early age, led me to rank squash as number one in my life.”

However, there were always difficulties and obstacles. “Sometimes they are completely out of your control, as having an injury,” said El Sherbini.

“I had a surgery on my knee when I was younger, this was a great challenge as I was not sure at that time if I will continue playing squash or not,” adding, “but I continued playing, training, and moving on facing anything that could stand in my way.”

Moving from a success to another in a short career, El Sherbini continued to claim victories, sometimes she wins, while few times she lost.

“As you are moving to higher levels in the sport, you are not just challenging your competitors to defeat them or claiming titles. You are also challenging yourself to offer your best,” noted El Sherbini.

She moved on to say “of course there will be continuing moments of weakness and   disappointments, but after all I love squash, and I play it as act of love. For me this is the most important part. I enjoy what I am doing.”

As a highly successful athlete, eyes of young emerging squash players across Egypt spotted on her, trying to follow her steps to get some of achievements in the future.

“I feel proud that I become a role model for young female squash players. This did put more responsibilities as I should keep the high ranking and good playing.”

She added “each Egyptian girl has to have a goal or a challenge in life, and to reach their dreams they have to have a will of steel despite hardships. Nothing is impossible. Just believe in yourself. This is the key for success.”