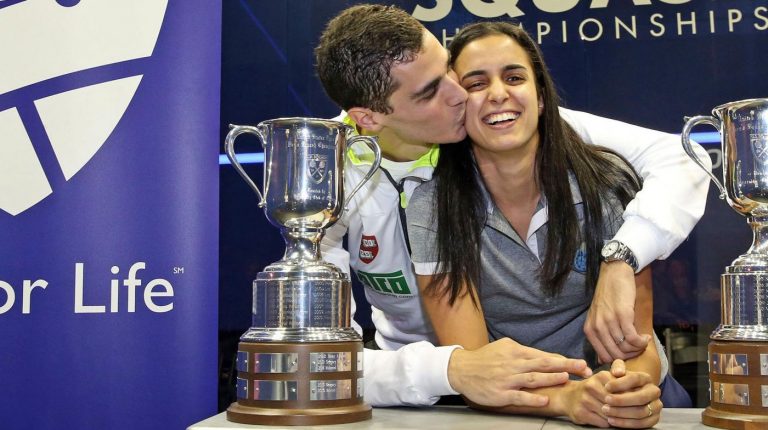 “Waiting for each other outside court is the difficult part,” said El Tayeb, adding “most times Ali finished his games before me, so he had to wait until I finished ones.”

“As doing so,” she said, “he kept standing at an area, where I can feel his closeness, noticing he is here for me, supporting and encouraging, so I can get more powerful to keep playing hard.”

Meanwhile, Farag commented “her victories push me to do my best to also win games.”

The young Egyptian couple share a passion for squash since they first met at the age of five, as they were in the same squash team at the club. “We started as friends and colleagues, then becoming close friends at age of 15, then lovers and a married couple,” said Farag.

Farag added “after I went to the US to study at Harvard University, we bonded, as I realised that her continuing support was not just because out of friendship and there was something more. It was love.”

In 2016, the couple got married, sharing the same house and life, and above all, the same journey.

“Living in the same house strengthened our understandings and love,” said Farag, adding, “by time I became more familiar to what pleases and upsets Nour, knowing when I should softly encourage her, and when I have to strongly push her to do best.”

One of the awkward moments they always have, is when one of them wins a game, while the other loses. “As professional athletes, we understand that gain and loss is part of the game, but as a couple we deal in more sensitive way, as the winning one should not exaggerate his feelings of happiness, respecting the other’s feelings,” El Tayeb noted.

However, she continued while looking at him with a mocking smile, “on the other hand, the one who wins has to cook and does the dishes.”

Adding to their unique mutual experiences, Farag and El Tayeb won the US Open squash titles in Philadelphia in October last year, becoming the first husband and wife in sporting history to win the same major titles in the same day.

“We were very happy. It was the first time I reached finals in a prestigious tournament, as well as Nour, who has become the first Egyptian to win the title,” said Farag, adding “it was a great surprise and an outstanding achievement.”

Despite the difficulties people reported facing in Egypt to reach high levels in different careers; Farag and El Tayeb believe that their country gave them a lot since they started playing squash.

“I cannot say I did not receive all the support I ever needed since entering the filed,” said Farag, adding, “I was raised in Egypt, my coaches who taught me everything were Egyptian. I would be ungrateful if I ever said that my country never contributes to my success.”

However, he noted that there is more support that could be offered to athletes inside the country. “I know what Egypt has gone through and the economic upheavals, but I believe there is a lot to offer, such as finding sponsors for athletes and health care, as well as coaching staff.”

El Tayeb agreed with Farag and added “I want to call on Egyptian young female and male athletes to follow their dreams. Do your best and your country will support you,” adding, “as Egyptian squash players could dominate courts and World high rankings, others in different fields could achieve the same.”