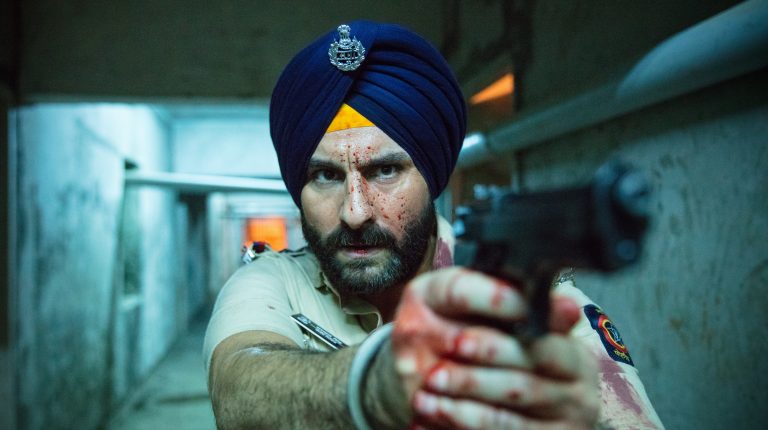 It was a normal day in the life of the decent Indian police officer Sartaj Singh, when he received a phone call from what he soon discovers to be a critical criminal at Mombai, who warns him that he has only 25 days to save the city from total destruction, it is soon to witness. With the aim to save the city, Singh, played by prominent actor, Saif Ali Khan, to discover the life of the city’s oldest and most dangerous criminals. As the plot develops, audience are taken to relive India’s history through the episodes of Sacred Games, Netflix’s first Indian series to be released on 6 July on the global media service provider.

Based on a novel with the same name, written by Indian novelist Vikram Chandra in 2006, the eight-hour long series stars Saif Ali Khan, Nawazuddin Siddiqui, and Radhika Apte, and directed by Vikramaditya Motwane, and Anurag Kashyap.

The series takes audience  to have an in depth look over the life of India’s local gangs and the coexistence of life of the working and underprivileged social class.

Daily News Egypt sat down for an interview with the stars and directors of Sacred Games in Dubai, as they were celebrating the launch of their latest productions and their first global series. The transcript for which is below, lightly edited for clarity:

The two directors Vikramaditya Motwane and Anurag Kashyap, have the history of directing politically critical films, that faced temporary bans in India, duo to criticizing and tackling sensitive topics from Indian censorship’s points of view.

“When we read the novel, we started discussing the visual elements that we want to add to the series, in order to make it more attracting and understandable,” says  Vikramaditya Motwane.

From his point of view, turning the novel into a television series now is more entertaining, as the novel’s plot makes more sense now to readers and viewers, more than before, at the time the novel was released.

“Politically wise, India still has the same government it has when the novel was released in 2006, at least when it comes to ruling parties. Adjusting the story now was just easier because it starts making more sense and easier to understand,” he adds reflecting on the political scene the streets of India are witnessing nowadays.

From both sdirectors’ points of view, the political and social scene the writer predicted and saw in the novel, and how he connected them to the past, “perfectly makes sense nowadays and makes more sense to do it now, more than in the early 2000’s.”

The series spotlights many aspects of different social classes’ lives. While audience are getting taken back to the disturbing childhood of the gang’s head who believes he controls the life of people to the extent of making him like a God; audience also gets to see the coexistence of Indians’ from different religions and backgrounds, while dealing with each other.

“I believe you have to stand where the truth is, and that book definitely showcase the truth when it comes to peoples’ different relations with god. The story showcases a fictional side of the truth of the Indian’s society complexed relation with god,”  Kashyap explained.

Despite the fact that the series tackles ideas considered untouched taboos to the conservative community, directors were not afraid or stressed for featuring the usually unspoked truth of the majority of Indians, “It was fun getting into the details of peoples’ lives, while creating a social-political timeline of people from the past, while evaluating your own present in it,” Kashyap added.

They explained that over the years, they have come to find a way of which they can tackle sensitive untouched topics in different indirect forms, in order to portray the truth without shocking people.

Both directors worked on shooting the shows’ recent years shots in the streets with hidden cameras.  Kashyap follows the reality school, of which he portrays the life of Indians as it really is, “and nothing would portray that in its best forms, other than shooting people in their regular life in the streets, without them even noticing or knowing that,” he explained.

Nawazuddin Siddiqui plays the critical role of Ganesh Gaitonde, the gangster’s head who aims to believe he has reached ultimate power, which makes him like a God. Despite being portrayed as a heartless man who might kill for fun, Siddiqui believes that Gaitonde has another side of the character portrayed as a demon in the series.

Tackling his life since childhood, where he was born and raised until early ages in an extremely poor village in India’s rural sides; witnessing his dad begs under the name of being a priest, and his mom selling herself for money, Sacred Games spotlighted the journey of a man who was severely affected by his childhood’s misery, leading him to be the criminal he ended up to be in the city.

“I see Ganish as an extremely ambitious man,” Siddiqiue started his talk saying, “from a poor start in a rural side, he just wanted to grow and get bigger. Yes, the ways of growing were ‘evilish,’ but it was only duo to his desire to overcome the surrounding circumstances of where he had come from.”

“Ganish was a very bold, and brutal character, however, what helped me performing it that way despite personal contradictions, is the help of the directors and the retailing of the script,” he explained.

Personally, Siddiqui comes from a similar background to where his character came from. They both come from a small rural poor village on the rural sides of India, which created a challenge for him as he described it.

“We both come from a similar background. However, I was never that ambitious. It was challenging to connect to that character as it touches me. I had to portray some of my lifetime events, in order to perform it that way,” he added.

While the show shows the past of the crime lord’s life, it also spotlighted the life of the decent police officer Sartaj Singh, who despite severe depression, spends his days looking for a way to save the city from the total destruction he was tipped with it.

Changing his regular look, Saif Ali Khan had a long heavy beard, and put on some extra kilos, in order to portray the perfect image of a police officer who was just dumped by his wife, whom he loves the most, and challenged by his superiors to solve the case, especially after he finds out that his dad is somehow connected to the criminal.

Khan believes that there Sartaj is a heroic character despite all of the burdens surrounding him in the show.

“Despite always being treated as an outsider, an isolated person and a loner, the character always seeks to solve his problems, which are a lot, and save the city at the same time, and that made the character interesting for me,” Khan said.

According to Khan, the main challenge of the role was to adapt to the character he performs, which is unlike him most of the time.

“I needed time to adapt to the fact that he is a depressed person, and at the same time he is angry with his surrounding system and aims to change it, which are two contradicting feelings,” he explains.

Spotify: How a Swedish startup transformed the music industry