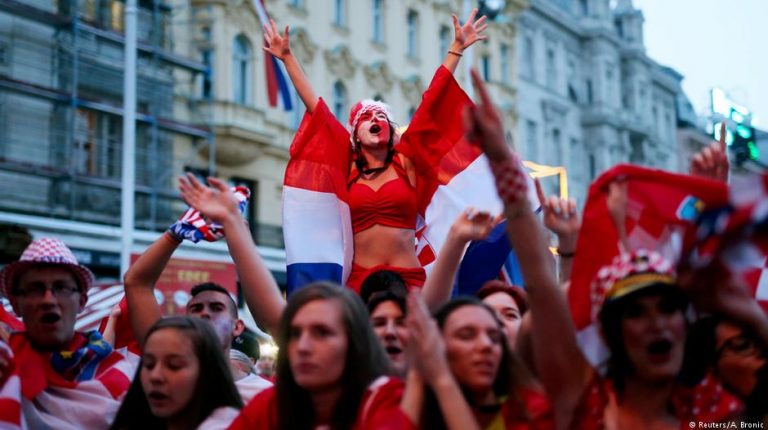 Croatia is euphoric ahead of the country’s World Cup quarterfinal match. Problems are being ignored, including scandals surrounding the stars of the national team. Any criticism is considered unpatriotic.It was not a match for the faint-hearted. Dark horse Croatia only won against the Danes after a penalty kick nail-biter. Barca star Ivan Rakitic converted the decisive shot from the spot, sending his country into raptures.

“The whole of Croatia exploded with happiness,” a local daily wrote. Football goals are being used as a balm for the soul of a people who recently were looking somewhat pessimistically at their own future.

The economy is performing badly, young people are emigrating in droves, state leadership is at an impasse and there is a general political disenchantment. But, thanks to the World Cup, there is finally a reason to rejoice. They are someone in the world of football again — like when they came third in 1998. People are finally proud of their own country again.

“In Croatia, and also in the other former Yugoslavian states, sporting successes are an integral part of the national spirit. Sport plays a central role in terms of national identity,” said Dario Brentin from the Center for Southeast European Studies at the University of Graz.

For Brentin, however, this is not surprising “considering what there really is to be proud of in the region — internationally speaking.” The fact is, there’s very little. Other than sports, there is hardly any other area where former Yugoslavian societies can keep up with the international competition

‘The best sports country in the world’

In soccer, tennis, handball or water polo, Croatians or Serbs have been achieving above-average success for years. Germany’s Bild newspaper recently described Croatia, with just 4 million inhabitants, as “the best sports country in the world.”

The reason for this is unclear, however. It can’t be because of any solid, systematic support for sports, as it barely exists.

Euphoria is good for promoting a sense of belonging, but it also has another, dark side. By the time the tension had reached its peak in the final minutes of the World Cup match against Denmark, fans had suppressed any memory of the scandals that tainted the atmosphere in the run-up to the World Cup.

Fans suddenly forgot the spectacular “Zdravko Mamic case,” which has kept Croatia’s football world on tenterhooks. In the end, it was about football, about a shot blocked by goalkeeping hero Danijel Subasic, and not about the criminal machinations of a powerful football sponsor.

Read more: My Europe: The Balkans at the World Cup – Are we really that pathetic?

At the beginning of June, Mamic was sentenced to 6.5 years prison. He is accused, together with accomplices, of embezzling more than €15 million ($17.6 million) in player transfers and of evading around €1.6 million in taxes.

Croatia’s captain and central figure at the World Cup, Luka Modric, as well as defender Dejan Lovren, are involved in the Mamic case as both were transferred abroad from Zagreb for considerable fees. The Croatian court was convinced that Mamic personally benefited from the transfers.

Two more cases involving fraud, embezzlement and money laundering are still pending. Modric and Lovren appeared against Mamic in the first trial, and Modric is now accused of perjury. The public prosecutor’s office in the eastern Croatian city of Osijek announced on Friday that the 32-year-old midfielder stood accused of lying on the witness stand in the trial against Mamic as well as in cases against three other defendants. Lovren is also under investigation for similar charges. The worst-case scenario could see the stars of Real Madrid and FC Liverpool facing prison sentences.

In Russia, the Croatians have been repeatedly confronted with the affair. The foreign press has been asking unpleasant questions. And back home? Most media have become quieter the further the “fiery ones,” as they call their national football heroes, progress.

The football-drunk nation is defending the accused because nothing should endanger this historic mission. The players’ critics are even accused of unpatriotic behavior, Brentin said.

“I don’t think that all critical voices have fallen silent, but it does seem as if national hysteria has gained the upper hand,” he told DW. “Sporting success can simply be better marketed during a successful world championship campaign.”

Travel agencies and banks have also benefited from Croatia’s sporting success. There has been a huge demand for travel packages for the quarterfinal match against Russia. At the agency Elite Travel, DW was told that all the seats have already been reserved. And it’s not a cheap thrill. The trip to Sochi costs about €750 per person, roughly the average monthly salary in Croatia.

The poorer fans are evidently going into debt to see the game in person. The Russian Sberbank in Zagreb has recorded a sharp increase in demand for short-term loans, up by as much as 30 percent compared with the same period last year.

“Most customers don’t tell us what they need the money for, but some tell us explicitly that they want to attend the game in Russia,” confirms Tihana Mamic from Sberbank in Zagreb.

The shoot-out drama in Nizhny Novgorod has brought the Croatian people and team closer together than they have been for a long time. Memories of the “golden generation of 1998” have come flooding back, when Croatia took third place at the World Cup in France.

President as the team’s top cheerleader

Politicians know how to take advantage of the current mood. The president has been presenting herself in the stands as Croatia’s top cheerleader, visiting the players in the dressing room after the Denmark game — just as German Chancellor Angela Merkel visited “her” team at the 2014 World Cup in Brazil.

Speaking of politics, in the slipstream of the World Cup, important decisions are being made in the country on a daily basis, laws are being passed and controversial projects, such as pension fund reform, are being set in motion. But hardly anyone is interested at the moment.

Croatians are living for the here and now. The Russia game is just around the corner.