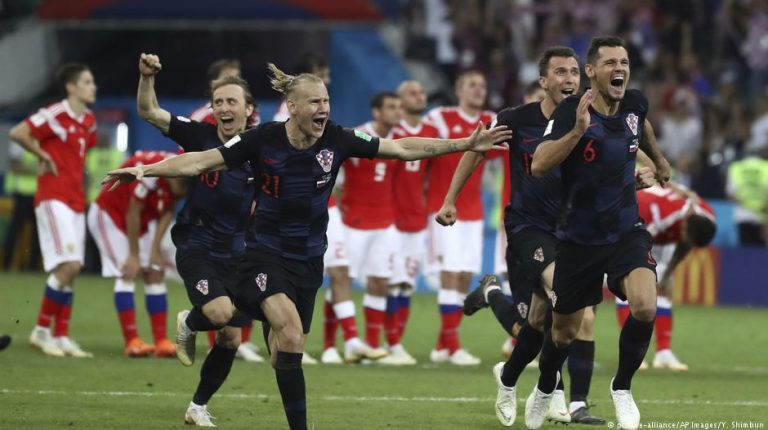 Croatia will face England in the World Cup semifinals after their second penalty shootout victory of the tournament, this time against the hosts Russia. The game was tied 1-1 after 90 minutes and 2-2 after extra time.Russia 2-2 Croatia, Fisht Stadium
(Cheryshev 31′, Fernandes 115′ — Kramaric 39′, Vida 101′)

Croatia needed extra-time and penalties to book their place in the World Cup semifinals as they knocked out host nation Russia. Croatia’s only previous appearance in the final four came in 1998.

Croatia have reached the World Cup semifinals for only the second time after winning a second consecutive penalty shootout to dispatch of a spirited Russia side.

Goals from Denis Cheryshev and Andrej Kramaric had the sides level after 90 minutes, before Mario Fernandes’ late header cancelled out a Domagoj Vida effort to send the tie penalties. Ivan Rakitic netted the winning spot kick to move Croatia’s ‘golden generation’ one step closer to their first-ever World Cup final.

Despite being the favorites coming into the tie, Croatia struggled to impose themselves against the hard-working Russian side in the opening exchanges.

Eintracht Frankfurt forward Ante Rebic sparked his side into life when, after a powerful run, he picked out Mario Mandzukic, who mistimed his effort from eight yards.

With Russia sitting deep, Croatia grew into the game, but got caught out against the run of play when Cheryshev produced a wonder strike to break the deadlock just past the half-hour mark.

However, the host nation’s lead last all of eight minutes as Mandzukic picked out Kramaric to head home the equalizer before the break.

Croatia looked the more invigorated side after the restart and, with Russia posing little or no threat throughout most of the second half, sought to capitalize. Ivan Perisic struck the woodwork, while Luka Modric saw a golden opportunity blocked by some last-ditch defending in the hosts’ backline.

Tired legs and persistent fouling denied the encounter any rhythm in the closing stages as the chances dried up, forcing the sides to battle it out in extra-time.

Croatia maintained their control on the encounter and duly reaped the rewards when Vida outmuscled his marker to plant a header into the bottom corner.

However, there was still a late twist in the tale as Fernandes nodded home an effort from Alan Dzagoev’s free-kick to sending the game to a shootout, where misses from Fedor Smolov and Fernandes saw Croatia book a final four tie with England.

118′ The stadium is bouncing. The crowd have witnessed yet another classic World Cup game. This World Cup really is the gift that keeps on giving.

115′ GOAL! Russia 2-2 Croatia — Russia are level! Fernandes powers a superb header from a free kick into the far corner. Russia are back in it!

112′ Subasic is soldiering on with one hamstring and making some amazing stops for Croatia.

109′ Subasic gets right behind Kuzyaev’s drive and does well to hold onto it after a Russia corner had fallen kindly for the midfielder.

106′ We’re back underway. The hosts have 15 minutes to stay in the World Cup.

105′ Croatia get a helping hand from the referee after Subasic – who is still clearly carrying an injury, by the way – drops a freekick in the box. He’s deemed to have been pushed but it seems a little soft, to say the least.

103′ Russia get two corners in quick succession. The first is ballooned into touch by a Croatian head, but the second goes close. Yerokhin gets a good connection but can’t steer it on target.

100′ GOAL! Russia 1-2 Croatia — Vida rises highest to meet a Modric corner and nod his side into the lead in extra time. It was a great connection, hard and aimed low into Akinfeev’s bottom left corner. Despair for the hosts.

97′ Searing pace from Modric to tear through the Russian midfield. He’s charging full pace at their back line but runs out of steam and has his pocket picked. Lovely driving run, though. He doesn’t want penalties, by the looks of things.

95′ Croatia sub. Vrsaljko off. Corluka on.

91′ Extra time gets underway in Sochi.

FT Russia 1-1 Croatia — All square after 90 minutes as a frantic second half comes to an end. Will anyone break the deadlock or will we be going to penalties?

93′ Modric picks up the World’s Worst Corner award but then redeems himself after collecting a throw-in and sending a humdinger into the box. Nobody gets to it though. This is going to extra time.

90′ Big moment, this. Croatia’s Subasic has, quite clearly, torn a hamstring but may be forced to continue until extra time. Croatia have used all three of their normal time subs. So, injured keeper or player in goal? Should be fun either way.

88′ Croatia sub. Kramaric off. Kovacic on.

85′ Russia look more than happy for this to go the distance. Croatia have five minutes to pinch one before taking on Russia’s superhuman sprinters in extra time.

75′ Croatia go close! Modric starts an attack with a strong run through midfield. He slips the ball to Brozovic out wide, who loops a ball to the backpost. Madzukic heads down and Modric takes fire from the penalty spot. It’s blocked and blocked again as Brozovic hits the rebound first time.

70′ This is turning into a scrappy match. Fouls in quick succession from both sides.

67′ Russia follow suit. Scorer of the wondergoal, Cheryshev, is replaced by Smolov.

63′ Croatia sub. Perisic off for Brozovic.

59′ How has that not gone in? A cross from deep soars over the head of Akinfeev, who thinks the ball is heading out for a throw. Modric is beneath it, though, and volleys it straight back across goal. It’s headed away, but only as far as Perisic. He gets the ball out of his feet and strikes a low shot against the post. It rolls across the face of goal and, eventually, to safety. Croatia should lead.

56′ Russia finally decide to venture upfield through the tireless Cheryshev. He collects the ball on the halfway line and surges towards Croatia’s back four. He’s bundled into from behind moments before slipping a dangerous pass out wide. The refree waves play on, which seems an odd decision. Looked a certain foul, that.

51′ Kraramic has just launched himself skyward in a bid to win Goal of the Tournament. He connects with a bicycle kick on the edge of the area but it’s a weak connection to say the least and Akinfeev gathers.

49′ Croatia have come out for the second half the better side, comfortably stroking the ball around while Russia sit deep. This is going to be a long 45 minutes if the host nation have anything to do with it.

46′ Things get underway once more in Sochi.

HT Russia 1-1 Croatia — All square at the break and this one is very close. We’re yet to see the best of Croatia, who have struggling to break down a dogged and well-organized Russia team. Not much in this one!

42′ The Fisht Arena has suddenly fallen silent. Croatia are well and truly back in this.

39′ GOAL! Russia 1-1 Croatia — Croatia are level! Mandzukic scampers down the left and lifts the ball up for Kramaric, and the Hoffenheim striker takes it on the run, nodding past Akinfeev. Game on!

36′ A couple of raids down the right by Fernandes nearly open Croatia up. Russia absolutely flying at the moment.

33′ Cheryshev’s fifth goal of the tournament, putting him just a goal behind Harry Kane in the race for the golden boot.

31′ GOAL! Russia 1-0 Croatia — Cheryhev with a thunderbolt for Russia! Out of nowhere, Denis Cheryshev lets fly with an unstoppable drive that Subasic doesn’t even get near. What a goal, and this amazing Russian journey continues!

30′ Cheryshev sends a free kick into the box from the right, but it has too much on it and lands safely in the arms of Subasic.

28′ Russia will probably be the happier of the sides at the moment. Created little but also not been overly troubled by Croatia.

25′ Croatia dominating possession but Russia sitting deep. It could be a long night for the Croats.

22′ The game has gone a bit flat as the realization of what’s at stake takes hold.

19′ This is developing into an open game. Rebic causing the Russian defence all kinds of problems.

16′ Croatia wins a free-kick in a dangerous area, but it drifts disappointingly over the bar.

13′ Rebic already proving to be a thorn in Russia’s side. His strong run and pass finds Vrsaljko, who in turn feeds Mandzukic, but his cross is miscued horribly wide.

11′ Russia forced to clear a couple of corners whipped in by Modric.

8′ After an uncertain start, Croatia are beginning to settle. Modric and Rakitic starting to see more of the ball.

5′ Rebic gets into a fine position on the right for Croatia and forces a corner by firing in a low cross that Akinfeev can only parry away. He nods the resulting corner over the top.

3′ Russia have made the more positive start here, putting Croatia under some early pressure. The Croats are struggling to put more than three passes together.

KICK OFF! We’re underway in Sochi!

19.55 The national anthems are done and we’re just about ready to go… hold on to your hats!

19:45 Hello and welcome to live coverage of the final quarterfinal, between Russia and Croatia! Team news to follow in just a moment…