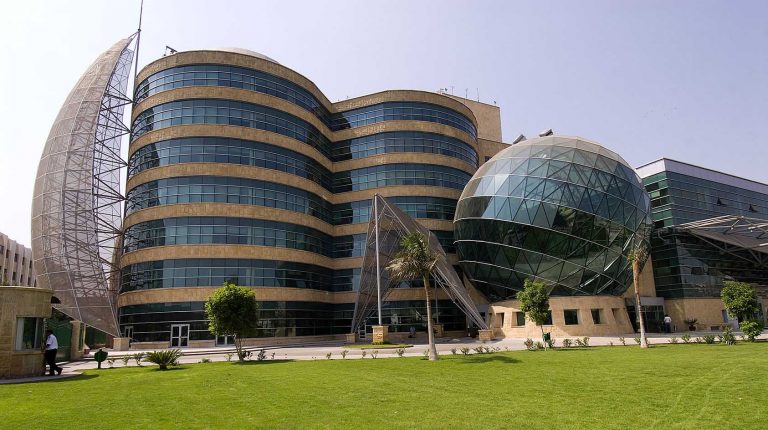 Children’s Cancer Hospital Egypt, or 57357 Hospital, is one of the largest caner hospitals in the world. It is located in the neighbourhood of Sayeda Zeinab and is specialised in treating various types of children’s cancer. It is distinct for the fact that it was built through donations via a large advertising campaign.

The idea began in 1999 after the rate of children with cancer increased and the National Institute of Oncology was unable to accommodate the large number of patients, causing children to die.

The first bank account number 57357 was opened at Banque Misr and the National Bank of Egypt (NBE) in all branches to collect donations for the project.

A large part of the idea was by Ola Lotfy, who donated EGP 10m for the start of construction. She also established the Association of Friends of the National Cancer Institute (AFNCI).

The hospital opened its doors to patients in 2007 after carrying out a tender in which American health planning association SLAM won, at a cost of $70m.

The hospital was constructed on the old Salakhana land at the heart of Sayeda Zeinab, as Fathy Sorour, former speaker of parliament, was able to convince Abdulreheim Shehata to give the land to the association. Former first lady, Suzanne Mubarak, laid the foundation stone.

The hospital is located on an area of 69,000 sqm. It was designed by famous engineer Jonathan Billy, who is famous for futuristic designs, in cooperation with Egyptian engineering experts.

According to the institution’s approved statistics, the total number of examinations in external clinics is 25,830. The total number of chemotherapy sessions in one day is 14,283. The number of operations carried out last year were estimated to be 1,084. Total received patients were 2,316.

Over the past period, a campaign was launched against the foundation, accusing it of misusing donations on too many advertisements, as well as turning the foundation into a family foundation for friends and relatives and giving those who work at it high salaries that are not in line with the nature of charity work. The hospital was also accused of using sick children in a way that emotionally blackmails citizens to urge them to donate.

An article written by famous writer Wahid Hamid against the foundation circulated widely, as he turned the issue into a battle between a person sympathising with the foundation and its services, and a supporter who sees a question mark when it comes to the foundation’s performance. Hence, the executive committee of the foundation’s board of trustees issued a report in which it stressed that the accusations levelled against it are not true, adding that it reviewed everything and made sure the foundation is managed with high transparency. The committee also welcomed any inquiries regarding the functions of the foundation.

Many fear that the campaign against the hospital could affect citizens’ donations, which primarily benefit the sick children.

Daily News Egypt went to 57357 Hospital with a range of questions, as well as rumours and accusations that have circulated, and sought to reveal the truth.

Sherif Aboulnaga, director of 57357 Hospital, welcomed the DNE team, and also said he welcomes any means for citizens to learn the truth through. He said that Egypt has many decent men who know what they are doing. He added that the foundation knows who the people behind the campaign are and will file a lawsuit against them. “We have already filed many lawsuits against those who deliberately tried to personally defame me. My fear is that this would eventually harm the sick children,” he said.

DNE also spoke to Mohamed Agag, the medical director at 57357 Hospital, who shared details about the foundation.

First, could you tell us what the recovery rate in your hospital is?

It is currently 74.2%. It changes, but it is automatic, so we cannot manipulate it. The international rate is 80%, which includes all kinds of cancer, but for each type there is a different recovery rate. The recovery rate in some types is 92%, while in others, it is 52%.

What is the cancer rate in Egypt?

But we know that the recovery rate in all other institutions in Egypt does not exceed 50%, in both private and government establishments.

Why are the recovery rates high at the hospital?

Because we are an NGO and do not seek money. Our diagnosis system is on a global standard and can take up to 15 days. We carry out scans and do not rely on traditional scans and tests to set the correct plan and the right protocol for treatment.

Why do you not take patients who began treatment outside the hospital?

We do this because starting treatment elsewhere makes it harder for us to diagnose again due to the treatment they are given. This is normal everywhere. The only solution is not to rush into a diagnosis for quick profit and for patients to stay at the facilities where they initiated treatment. We are the only hospital in Egypt that has a file for every patient since 2008. We have an electronic system that cannot be wrong. I cannot start patients on treatment before diagnosis is complete.

Do you conduct clinical research or try medicine on patients?

We do not have clinical research. I dare anyone to prove we do. Moreover, in Egypt, we do not have a law to allow this. The recent law will regulate this later.

What about your role in scientific research?

We prioritise scientific research as we learned that the 74% success rate cannot be exceeded without research.

We have three aspects: initial research in five categories, chaired by scientists that came back from abroad to serve their country here. Soon, we will reveal a breakthrough in cancer treatment, similar to the hepatitis C treatment. These researches are fully funded by foreign grants, not by donations.

The second aspect is the cell bank. We have the largest cell bank in Egypt, where we also keep sperm and oocytes. When they grow up, they may have problems with having children due to chemical therapy.

The third aspect is clinical research, which involves 55 individuals who revise the treatment protocol and daily patient follow up. We have 33% of patients who do not have the money to come to the hospital.

How much does each patient cost? Why did you not set up an economy class?

We did not set up an economy class as we cannot ask patients how much money they have. Moreover, the ratio of cancer-suffering rich people is low and will not offset the difference, which would also waive the justice and equality and treatment we seek.

What about your wages?

We suffer a high turnover due to low wages. We cannot give the wages of private hospitals, not only because of the financial value, but also as we give health insurance and fund research. Given the global reputation of the hospital, working here is an added value for medical staff. Yet, we face difficulty finding consultants of the right level to accept our wages.

What about the salary of Sherif Aboul Naga?

He announced his salary, but he did not say one thing: he donated 50% of his salary since he started working at the hospital. The board of trustees requested all data of the hospital and ensured this happened, then thanked the hospital and its management for their hard work.

What about the expensive ads?

This is a funny accusation that is not even based on real figures for several reasons.

The law bans our spending on advertisement above 13% of our capital. Our current provisions for ads is well under 9%.

We do not turn to advertisement companies, but we have a department here of young creative youth that we are sponsoring. This saves us a lot of money. We also have sponsors that show their names on our ads, such as Cheb Khalid. We resort to ads and marketing as we rely on donations, so we seek them in different ways.

What about the campaign against you?

The board of directors is responsible for our accountability to the Egyptian people. They asked for the data and we sent it to them. The board then issued a statement to refute all accusations and thanked the hospital. We are ready to receive any inquiries and our doors are open to all.

We have already filed reports against this campaign and these accusations. And we await the results of the investigation to learns who is benefiting from it and who can benefit from standing against little children.

AIBK participates in Sacrifice Voucher programme in cooperation with EFB