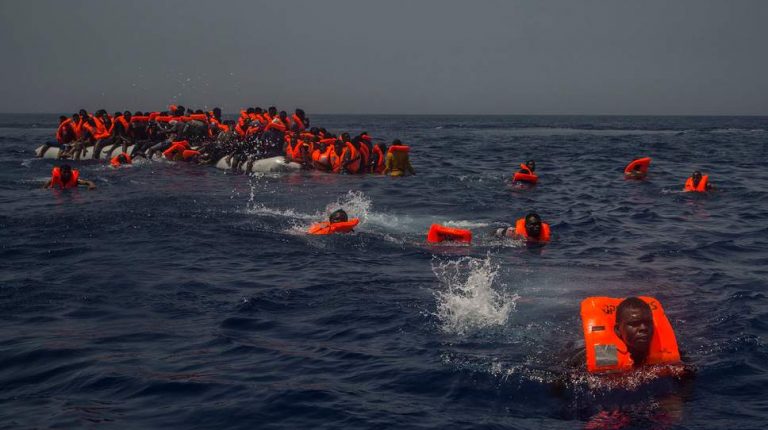 Some 3,000 migrant children remain separated from their parents and held in federal custody, in detention centres at the southwest border with Mexico, decried by critics of US President Donald Trump’s zero-tolerance policy regarding illegal immigration.

Thousands of miles away, where about 40 people were rescued, more than 60 migrants are reportedly missing in the Mediterranean Sea after their boat capsized off the Libyan coast.

The events unfolding over the past weeks mark yet more painful chapters in the alarming and ongoing crisis of illegal migration, for which concerned authorities and bodies are putting efforts to find ethical but serious counter-measures.

One of the solutions was apparently not what the Trump administration went for. Despite later decisions to halt the separation process, the US authorities are currently using DNA tests to reunite children with their parents and reportedly asking for a deadline extension.

“No child should endure the trauma of being separated from their parents or the terror of not knowing if they will ever see their families again,” Los Angeles Mayor Eric Garcetti was quoted by the media as saying, as the city approved $10m in funds to aid separated migrant children.

Meanwhile, over 200 migrants have drowned in three days in the Mediterranean at the end of June, making the death toll for 2018 over 1,000, the International Organisation for Migration (IOM) said.

“There is an alarming increase in deaths at sea off Libya’s coast,” said IOM Libya Chief of Mission Othman Belbeisi, adding, “Smugglers are exploiting the desperation of migrants to leave before there are further crackdowns on Mediterranean crossings by Europe.”

In 2017, the number of people forcibly displaced from their homes worldwide came at a record rate of 44,400 every day, the United Nations High Commissioner for Refugees stated, explaining that the flow was largely fuelled by crises in the Democratic Republic of Congo and Myanmar, as well as the ongoing conflict in Syria.

More than 43,000 people have risked their lives to reach Europe by sea thus far in 2018, with over 1,000 feared to have drowned, the European parliament’s data pointed out.

The countries hosting the largest number of refugees are Turkey, Pakistan, Uganda, Lebanon, Iran, and Germany.

The European Union (EU) significantly increased its funding for migration, asylum, and integration policies in the wake of the increased inflow of asylum seekers in 2015, but it has also been focused on limiting the flow through fighting the root causes of migration.

However, the EU is divided on how to tackle the issue, including whether migrants should remain in the first host country or be redistributed throughout other nations.

After preventing migrant rescue ships from docking at its ports, Italy has faced criticism over its policies aimed at stopping the flow of illegal immigration, especially from Libya.

IOM President William Lacy Swing has urged Libya to stop detaining migrants who have been returned to the country’s shores after trying to cross the Mediterranean Sea to Europe.

Migrants coming from Libya’s neighbouring country Egypt have also been subjected to abuses, including killings and kidnappings, mostly by militant or unknown armed groups. The Egyptian authorities have increased efforts to stop citizens from crossing the border in bids find job opportunities.

“When I left Gambia, due to the former political situation in my country, it was a challenge to find work. I could not afford to continue my studies either, so I decided to go to Europe; I had been encouraged to go by friends who had all made it there, but it was never my original desire. By the time I reached Agadez in Niger, I had already started losing all hope.

After spending almost two months on the road to Libya, I proceeded to Tripoli, where I was supposed to take a boat and cross to Europe. At about 10:00 pm on the night of the crossing, our boat broke down. A rescue boat came and took us back to shore and then to Griana prison; there were over 100 people there. They would give us one pot of milk and one piece of bread every day at midnight, then we would not eat again for the next 24 hours. Every couple of days someone else would die. I spent almost three months there until they decided to relocate some of the people to another prison in Sabha, including me. I spent another four months in the second prison until my family paid a ransom.

After I got out, I worked for four months until I saved enough to go to Tripoli again. That was my second attempt to go to Europe; we spent almost a month in the connection house in Tripoli, until the weather was stable enough for us to cross. On our way, the water mixed with oil in the boat’s engine, and it stopped. We were stranded at sea for four days. Some fishermen captured us and took us back to prison, where I spent another four months.

Once again, the jailers made us call our families to ask for money in exchange for our release; my parents told me that upon my release, I should go back to Gambia. Some of my friends did not even have contact numbers for their families. They assumed that they would only get in touch with their families once they reached Europe. For these people, it was impossible to get released because they had no one that could pay for them. If you do not pay, you do not get out.

Finding food was a daily struggle; you need money, and, in order to get money, you need to work. However, working is a risky business. On your way to work you can be robbed or, even worse, killed. One day, on my way back to the ghetto with my friend, we were attacked; the assailants shot him dead. I took him back to the ghetto and someone managed to take his body to a hospital, where it lay for a week before they decided to bury him. After I attended his funeral with his younger brother, I called his parents to let them know what had happened, and they begged us to go back to Gambia.

The things I have seen in Libya are a valuable life lesson for me. People are different—some lose their minds over the things they witness in Libya. I do not want my family or my country to lose me. Maybe I can become someone once I am back, and help my country develop, but I need to be alive in order for that to happen. My fellow brothers need to know that this route is one of sacrifice. You do not know how you will die, but chances are it will happen. We should stay in our country and feed on what we have.”

This story was initially published in “I am a migrant”, the IOM’s platform to promote diversity and inclusion of migrants in society. Souleyman has benefited from the voluntary return and reintegration programme under the EU-IOM joint initiative funded by the EU and implemented by the IOM.