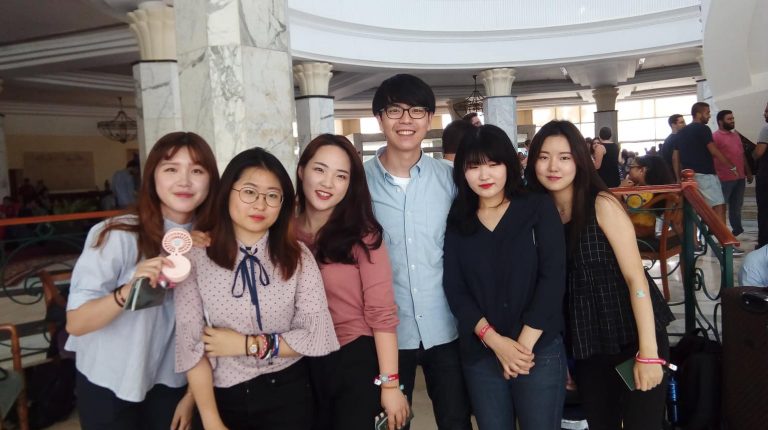 AIESEC’s annual international congress took place from 2-9 July in Hurghada, Egypt, with the participation of 120 countries.

It is the second time for Egypt to host this congress, after the congress that took place in 2013.

In this term, Ayman explained that, every year, AIESEC held something like the general assembly, in which all of AIESEC’s presidents attend; countries who have applied to host the congress, present their portfolio first, and then a voting process begins.

He continued that he thinks the main obstacle that impeded Egypt’s winning in the voting before was that when the assembly looked at Egypt’s portfolio, they said that the country is wonderful, but then start mentioning problems, including the lack of safety.

He noted that AIESEC’s members in Egypt made a great effort this year to explain to the assembly how Egypt will organise the congress safely.

Impact of congress on tourism in Egypt

DNE sat down for an interview with participants from different countries, in order to discover if the congress achieved its aim or not.

Thao Vnam, the president of AIESEC’s local committee in Vietnam, who studies international trade, told DNE that it is her first time to visit Egypt, describing the Egyptian people as very friendly.

“I had a fear of coming to Egypt at first due the lack of stability and the political situation, but I searched on the internet and asked my friend, who was studying something about Egypt, if it is safe to travel there or not, and she told me it is ok,” she explained.

“Then I calmed down, especially after I arrived at the airport. Meeting some of the Egyptians made me feel that I am home and that it’s safe,” she continued.

Meanwhile, Tonya, who is responsible for the organisation’s development in Russia, told DNE that all the people in Russia are following the World Cup in Moscow, so it was really hard to leave cheering for the national team and being alone in Egypt.

However, she added that she is happy to be in Egypt, pointing out that it is her first time to visit the country.

She visited the Pyramids, which she described as an amazing reflection of Egyptian power, noting that the Egyptian people are nice to her.

She assured that she will try to visit Egypt again with her family.

Jiyoung Cheon, the AIESEC national vice president of talent management in Korea, told DNE that it is her first time in Egypt, adding that she spent a night in Bahariya Oasis and saw the sunset, describing this desert as the best place.

Meanwhile, Heni Jean, the national president of AIESEC in Korea, told DNE that it is his first time in Egypt, but that it was on his list of places to visit, noting that his impression of the people in Egypt is really good, as they are friendly, and that he is really upset he did not visit the country before.

AIESEC is distinguished from other organisations

“I joined AIESEC in 2015. I think what distinguishes AIESEC from other organisations is that they have a value in AIESEC, which is living diversity. We do not have to judge the different cultures; we just accept and respect them,” Vnam said.

Meanwhile, Cheon joined AIESEC three years ago, due to her belief in the potential of every human to make a better world.

“I just want everyone to realise that his or her impact is not as small as they think,” Cheon asserted.

“Meeting all kinds of people from all around the world really excites me. Then learning from all these international operations, getting to meet people and make good relationships, and then having not only working relationships, but lifelong relationships across the world, is really amazing,” Jean explained.

AIESEC plans to have at least one chapter in each governorate within three years: AIESEC’s first Egyptian global president