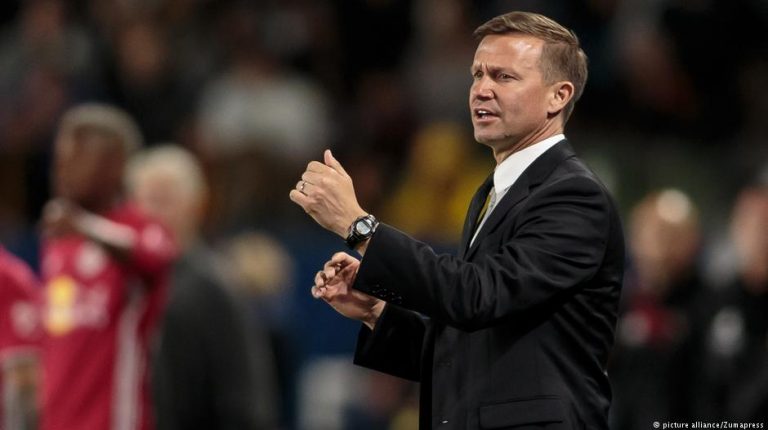 When RB Leipzig announced that sporting director Ralf Rangnick would be taking over as coach for the coming season, they also announced that Jesse Marsch would be an assistant. So who is this American former MLS coach?As has been often observed in the past, having energy drink-maker Red Bull as your main sponsor or owner has its advantages, which go even beyond the considerable financial resources at your disposal.

The close relationship allows players and other personnel to be swiftly moved around to fill a hole when needed. On Monday, RB Leipzig unveiled the latest name to move from one Red Bull organization to another, and it is one that is not exactly a household name beyond American soccer circles.

Jesse Marsch, who has signed a two-year contract at RB Leipzig, is a former US international (2 caps) who played more than 100 games in Major League Soccer (MLS) for DC United, Chicago Fire and the now-defunct Chivas USA. The 44-year-old got his first break as a professional coach, when he was appointed by the expansion Montreal Impact in 2012. However, the two sides parted company, reportedly on “amicable” terms after he led the team to 12 wins, 17 losses and seven draws – a respectable record for a first-year MLS club.

Marsch’s next coaching break came with the New York Red Bulls prior to the 2015 season, and it was a successful campaign as they went on to win the MLS Supporters Shield as the best team in the regular season with 18 wins and 60 points – a league record at the time – and he was named MLS Coach of the Year. Under Marsch’s guidance, the Red Bulls reached the 2015 MLS Eastern Conference Final, the 2017 US Open Cup Final, and the 2018 CONCACAF Champions League semifinals.

When the club announced last Friday that he would be leaving New York, Marsch did so as the winningest coach in Red Bulls’ history, with a record of 58-35-25. He also departed midway through another successful season for the Red Bulls, who were in second place in the Eastern Conference on 32 points with 10 wins from 16 games when he left.

By the time of that announcement, though, he was already in Leipzig for talks about his new role at RB. There had been rumors about a possible move to Leipzig ever since Ralph Hasenhüttl and RB went their separate ways, and Marsch had made no secret of his ambition to coach in Europe one day. Now he has achieved that, even if he has had to step back into the role of an assistant.

He’s a successful coach, who wants to be in Europe,” RB managing director Oliver Mintzlaff said at the press conference announcing that Ralf Rangnick was returning to his former role as head coach for a season. “We believe that he can help us with his approach, and the chemistry with with Ralf Rangnick is good.”

Mintzlaff also confirmed that Marsch was also to remain part of the coaching staff when current Hoffenheim coach Julian Nagelsmann takes over in a year’s time.