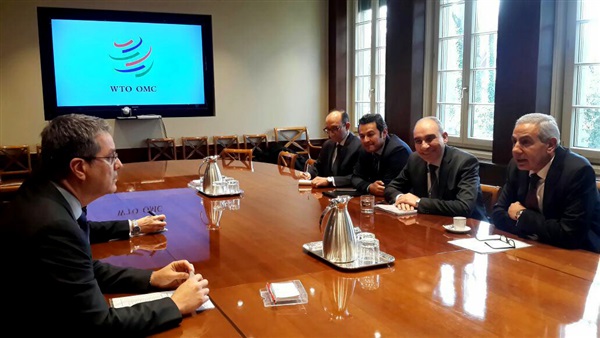 In Egypt’s Trade Policy Review, the World Trade Organisation (WTO) held a session from 20-22 February with its members to comment on Egypt’s trade policies. The fourth trade policy review of Egypt was held on 20-22 February 2018.

Member states noted that the previous review was in 2005, pointing out that the Egyptian government has made significant changes to its economic model since 2006.

Meanwhile, most of the non-member states highlighted the problems and challenges of ministerial decree No. 43/2016, which requires importers to register with the General Organisation for Export and Import Control (GOEIC), and they spotted its effect on the trade exchange between Egypt and other countries.

Nevertheless, all Arab countries participated in the review, such as Saudi Arabia, the United Arab Emirates, Kuwait, Bahrain, Jordan, and Iraq, have praised the Egyptian trade and economic reforms that have been taken recently by the country.

In December 2015, former Minister of Industry and Trade Tarek Kabil issued a decree that was published in Egypt’s official gazette, Al-Waqa’ia Al-Masriya, which said that only foreign factories registered in the record of the GOEIC will be allowed to export to Egypt. This was put into effect in March 2016 to regulate the process of importing goods into Egypt as a means of encouraging local production to reduce foreign competition and improve the foreign exchange reserve. Thus, the ministry put some requirements that consist of the registration of foreign manufacturers at the GOEIC, and it increased the import customs duty on numerous imported goods, where President Abdel Fattah Al-Sisi issued a decree to raise customs’ tariffs on some imported goods in December 2016. Furthermore, the ministry obliged the importer to attest import commercial invoices and adopting a policy of “cash against documents.”

India has highlighted some concerns regarding the Indian pharmaceutical companies that face procedural difficulties for registration of drugs due to the complex certification regime in Egypt.

India noted that Egypt has recently imposed a ban on importing three-wheelers from India. In addition, new guidelines have been issued for making it mandatory for foreign manufacturers to register with the GOEIC to export certain items, which is making exports procedurally difficult and cumbersome for companies.

“While investments of Indian companies are growing in Egypt, many of them are also facing difficulties for obtaining work permits for professionals, due to the restrictions being imposed by Egypt. Lastly, in a number of tenders floated by Egyptian public-sector companies, some restrictions have been imposed on Indian companies to participate in the bidding process,” India noted in trade policy review session.

Meanwhile, Canada urged Egypt to join and bring its perspective to discussions on some of the issues raised at the 11th WTO Ministerial Conference in Buenos Aires, Argentina, namely regarding micro, small, and medium-sized enterprises (MSMEs); trade and women’s economic empowerment; and e-commerce.

Canadian-Egyptian commercial relations are broad in scope and our two-way trade has been relatively stable over the last five years, with two-way trading reaching $1.3bn in 2016.

Canada has sizable investments in Egypt in the field of petrochemicals and oil and gas, with the potential for growth in several other sectors, given improvements in the Egyptian economy.

Also, Canada noted, “However, despite Egypt’s recent, more favourable economic outlook, Egypt still faces many challenges. Future economic growth and stability will depend on a number of conditions, such as a lasting commitment to instituting economic reforms, including making relevant laws business friendly, making major improvements to institutional effectiveness, and the development of a more effective commercial legal system. This is why it is imperative that the aggressive reform programme in Egypt must continue.

Canada pointed out that Egypt will need to maintain prudent macroeconomic policies and broaden its growth-enhancing reforms. Indeed, the further recovery of economic sectors and tourism revenues in particular should help Egypt’s deficit and hard currency reserves. In addition, Egypt needs to continue to expand and diversify its economy, attract more foreign investment, and improve confidence through greater transparency and predictability in its economic environment.

40% drop in exports from EU in 25 categories of products

Forty EU companies are still awaiting registration, since the adoption of the ministerial trade decree.

At the bilateral level, the EU and Egypt enjoy a free-trade area through an association agreement, and the EU has been Egypt’s primary import and export partner since the agreement came into force. The EU said, “Obstacles to trade are that the EU notes with concern that decree No. 43/2016 has made importing 25 categories of goods more difficult, as shipments must come from registered manufacturers or trademark owners. Registration is an onerous process and comes in addition to the requirement of compulsory pre-shipment inspection.”

The EU added that although Egypt has taken certain steps to improve the efficiency and transparency of its customs administration, the EU believes that further action is required to remove the remaining hurdles. Notably, the EU would encourage improving certain customs procedures, in particular the requirement to send certain customs’ documents through banks, and to avoid that the vast majority of imports are still processed through the more cumbersome “red channel”. These examples tend to negate Egypt’s efforts elsewhere to simplify the customs process.