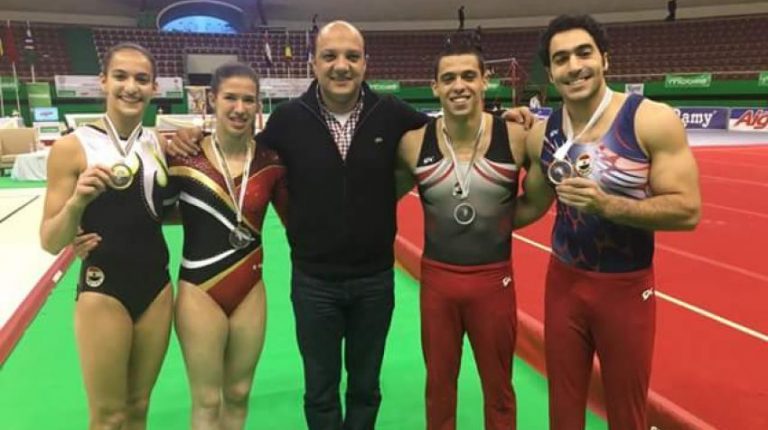 This is the 18th edition of the Mediterranean Games, with 170 Egyptians competing in 21 out of the competition’s 33 sports, including beach volleyball, bow and arrow, karate, rhythmic gymnastics, swimming, and triathlon.

The medals put Egypt in fifth place in the medal table out of the 25 participating nations. This means that Egypt is currently on par with the overall performance of the previous edition of the tournament in Mersin, Turkey in 2013.

Amin added that the Egyptian gymnasts achieved unprecedented positive results in the Mediterranean Games, noting that the Egyptian women’s team seized the fourth and fifth places in the women’s individual all-around competition, as well as the fourth place in four apparatuses.

The artistic gymnastics events were held at the Reus Olympic Pavilion from 23 to 26 June. All participating gymnasts, including those who were not part of a team, participated in a qualification round, which also served as the teams’ final. This year, the first round was split into two days of competition, where vault and uneven bars were competed on the first day, and balance beam and floor exercise on the second day. Four gymnasts per team were permitted to go up per apparatus, with the highest three scores counting towards the team’s score. The combined results over two days showed the team’s totals. The results of this competition determined which teams and individuals would participate in the remaining competitions, which included the all-around competition, in which the sixteen highest scoring individuals in the all-around competed. Each country was limited to three gymnasts in the all-around final. The finals included the eight highest scoring individuals of each apparatus. Each country was limited to two gymnasts in each apparatus final.

Since he came in office in October 2017, Amin has faced several challenges and a long list of continental and international competitions. The beginning was with the African championships qualifying for the 2018 Summer Youth Olympics, which will be held from 6-18 October. The event will take place at the Parque Polideportivo Roca in Buenos Aires, Argentina.

In April, Egypt hosted two divisions—trampoline and rhythmic—at the 2018 African Junior Gymnastic Championship, which is one of the qualifying tournaments for the Youth Olympic Games, with the participation of 58 Egyptian players. About two weeks later, Swakopmund, Namibia hosted the artistic division at the 2018 African Junior Gymnastic Championship with the participation of 39 Egyptian players. Three Egyptian players managed to qualify for the Summer Youth Olympics, including Tia Diaa in rhythmic, Mohamed Montaser in boys’ artistic, and Zainab Ibrahim in girls’ artistic.

In preparation for the 2018 Mediterranean Games, the Egyptian players were almost continuously at internal training camps because of the successive world cups and championships held in this period. Due to the lack of capabilities, the EGF could not hold external training camps, which are essentially needed for the players to enhance their talents and experience.

Amin told Daily News Egypt that the EGF suffered a severe shortage in different gymnastic apparatuses in recent years. When he assumed his position, Amin obtained an African funding worth EGP 3m, which was used to purchase the required apparatuses for trampoline and rhythmic events, and posed a tender to buy more apparatuses in instalments for acrobatic events. These apparatuses were used in the African Junior Gymnastic Championship held in April.

“We covered three gymnastic branches, but we still have shortages in the apparatuses of the other two branches—the men’s and women’s artistic events. We are actually establishing local gymnastics from scratch,” Amin said, noting that the Egyptian players used to resort to local clubs that have suitable gymnastic apparatuses for training.

Amin added that he contacted the Ministry of Sports and Youth in a bid to receive suitable funding for purchasing the missing apparatuses. However, the EGF’s efforts were halted after former Prime Minister Sherif Ismail’s government had resigned last month and the new government led by Prime Minister Moustafa Madbouly was sworn in, bringing a new minister of sports.

Amin said he is looking forward to meeting with the new sports minister, Ashraf Sobhi, to plan a timeframe for purchasing new gymnastic apparatuses and providing sufficient financial support for the federation, which has totally depended on subscription fees.

He noted that the federation could not sign any foreign coaches to enrich the experience of players, and basically relied on local coaches, who could not even accompany the players at all competitions due to the high costs.

Speaking of Toman’s achievement at the 2018 Mediterranean Games, the president of the EGF revealed that he had a friendly five-step deal with the player to make her coach accompany her at the external competitions. According to Amin, Toman showed great commitment and won a gold medal in the African championship in Namibia, so her coach travelled with her to the next World Challenge Cup held in Croatia, where the judges gave Toman high difficulty and execution ratings for her first try. She was therefore very tense and lost her concentration, so on her second try, her scores were lower, as she slipped and ranked eighth. However, Amin sent Toman’s coach with her to the 2018 Mediterranean Games, which contributed to her remarkable achievement and winning a gold medal in the vault finals.

Regarding the future competitions, Amin said that the federation is preparing for three world cups and a world championship to be held in September and October this year. One of these tournaments is the gymnastic teams’ qualifier for the 2020 Olympic Games in Tokyo.

In regards to the World Artistic Gymnastics Championships, to be held in Qatar from 25 October to 3 November, Amin said that the EGF is preparing to participate in the event despite the current political rift between Egypt and Qatar, expecting that they will play in Qatar regardless of the political problems.

On 5 June 2017, Egypt and several Gulf and Middle East countries cut diplomatic ties with Qatar and imposed economic sanctions, accusing it of harbouring terrorist and sectarian groups that aim to destabilise the region, including the outlawed Muslim Brotherhood group and the Islamic State and Al-Qaeda militant groups—a claim that Qatar rejects. They also closed their airspace and seaports to Qatari transportation.

Amin said the Egyptian gymnastic players are training regularly at the Olympic Centre for Training National Teams, being the only venue in Egypt that provides a training place for the national gymnastics team, noting that the government is currently building two new gymnastics centres at the Gezira Youth Centre and the New Administrative Capital. Unfortunately, there are no other gymnastics centres outside Cairo.

Amin said that former Sports Minister Khaled Abdel Aziz was cooperative in terms of providing the federation with required tools and apparatuses, but he could not help in the establishment of new gymnastics centres outside Cairo.

Amin hopes that the new minister can solve this problem, noting that Sobhi seemed to have fresh ideas and thoughts on development for the sports sector in Egypt.

Regarding the 2020 Tokyo Olympic Games, Amin said that two years are a very short time to prepare good players who can compete in different events, noting that other countries prepare their players for about five or seven years to win Olympic medals.

He highlighted that Egypt’s main problems in the sports sector are the lack of insightful planning and dynamic management, pointing out that the ministry delays in responding to the federations’ demands due to complicated bureaucracy.

Amin explained that the state does not have a good plan to prep Olympic champions, noting that most of the Egyptian Olympic and world championship medallists, such as Greco-Roman wrestler Karam Gaber and weightlifter Mohamed Ehab, made their achievements on their own, benefiting from their unique skills, but without previous planning.

He revealed that Toman stopped her training six months before the 2018 Mediterranean Games due to lack of attention from the federation, and he met with her after assuming his office in a bid to convince her to return to training with the national team. After an hour-and-a-half meeting, Toman agreed to play again for the national team, as she felt the federation’s support, which finally led her to winning a gold medal in the competition.

The EGF has suffered internal conflicts, as about 14 council boards have assumed management of the federation over the last 10 years, until the International Gymnastics Federation decided to suspend the EGF and prevented it from participating in international competitions after Egypt’s National Council for Youth sacked the EGF’s council board, led by Amr El-Saeed, in 2010.

In 2015, the former sports minister asked Amin and the current council board to lead the EGF as acting management until an election took place. The council board, headed by Amin, stayed in its position waiting for the issuance of the New Sports Law, which was finally released in 2017. In October 2017, Amin was elected as president of the EGF.

Amin said that he has a plan to spread gymnastics nationwide, noting that the number of young players enlisted in the EGF increased to 10,000 players this year, up from 4,000 last year.

He concluded that if the number and performance of players in Egypt is constantly improving, Egypt will soon win an Olympic medal in the Youth Olympics and the Olympic Games.