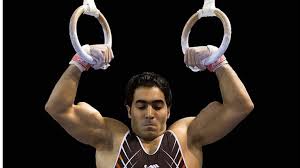 Ali Ramadan Abou El-Kasem Zahran, 28, is an Egyptian artistic gymnast representing his nation at international competitions. He participated in world and continental championships, whereby he has won several medals. Zahran was also victorious in the 2018 Mediterranean Games, which was held in Spain. He competed in the men’s rings and won the bronze medal, after finishing in third place. He received a difficulty score of 6.200 and an execution score of 8.533, giving him a total score of 14.733.

Zahran started his professional career at Cairo Sporting Club, before he moved to Egyptian Shooting Club, and then to Tala’ea El Gaish SC.

He joined the Egyptian national gymnastics team in 2013 and worked as a gymnastics coach in different local clubs.

“My parents were very supportive throughout my gymnastics career, since I started to play at a young age. I got married about seven months ago, and my wife always offers support to help me succeed,” he said.

Zahran told Daily News Egypt that he experienced many difficulties throughout his career that could have ended his professional journey.

“When I was 16, I faced many obstacles that could have forced me to quit the game, but I worked hard and fought to make something for myself,” he said, adding, “these obstacles included education, lack of resources, frequent change of coaches, and injuries. All gymnastics players get injured frequently, and I experienced that several times. They took some time before I was doing gymnastics on my hands again. Even though they healed correctly.”

Zahran pointed out that previous council boards of the Egyptian Gymnastics Federation (EGF) could not provide sufficient treatment for injured players, noting that the current board is working to secure funding for treatment and external training camps; however, the red tape hinders these efforts.

Zahran said that the weak media coverage of Egyptian accomplishments in world and continental competitions badly affected the players, as they always need support and appreciation to increase their achievements.

He also noted that “foreign gymnasts participate in all the five world cups held annually, not to mention their external training camps, while the Egyptians barely go to one or two of these tournaments, due to the lack of financial resources.”

According to Zahran, the high intensity of annual competitions and external trainings enriches the players’ experience and improves their performance, increasing their chances of winning more medals or high ranks.

“The last external training camp held for Egyptian artistic gymnasts was in London in 2013,” he revealed.

Zahran called on the Egyptian sports authorities, namely the Ministry of Sports, to allocate suitable funding for artistic gymnasts, that they can enter external training camps and develop their performances.

Regarding the future tournaments, Zahran said there will be two world cups in France and Hungary, to be held in September, a world championship in Qatar in October, and a world cup in Germany in November.

He stressed that the coming German and Qatari tournaments are very important, because they are part of the 2020 Olympic qualification system and can be used to earn a quota place for both teams and individuals.

Zahran hopes to be honoured among his colleagues by Egyptian President Abdel Fattah Al-Sisi, similar to previous champions in different sports.

From 2012 to 2018, Zahran was a six-time finalist of the world championships and a three-time gold medallist in the finals of the African championships.

In 2013, he was ranked sixth at the World Cup in Slovenia, where Eleftherios Petrounias from Greece won first place. In the same year, he came in fourth place at the Mediterranean Games held in Mersin, Turkey.

Zahran is the only Egyptian male gymnast who has a skill—on rings—officially named after him, as he was the first to successfully compete in the event at a major international competition. Zahran’s skill was showcased at the 2013 World Challenge Cup Slovenia. It was awarded the name ZAHRAN and added to the Code of Points in Men’s Gymnastics. Gymnasts have the opportunity to present new elements at any official International Gymnastics Federation (FIG) event. In order for them to be included in the Code of Points, the submitted elements must be performed by the gymnasts during the respective tournament. Athletic careers are finite, but showing a skill that has never been done before in gymnastics is a way for gymnasts to achieve immortality in the sport. A gymnast who successfully performs a new skill has the honour of having it bear their name in the Code of Points.

In 2014, Zahran won a gold medal in the artistic gymnastics discipline, during the African Championship in South Africa, as he came in first place, while the Egyptian team came second.

In 2016, Zahran made history, as he became the first Egyptian to reach the highest podium of an international event in gymnastics. Against all odds, Zahran won the gold medal at the Artistic Gymnastics World Challenge Cup 2016 held in Szombathely, Hungary.

Zahran’s gold medal came in the rings discipline, where he was able to display a remarkable performance, surprising his competitors when he made it to the event’s finals. Zahran then went on to outclass his nearest opponents, Yunlog Zhang from China and Vietnam’s Nam Dang, who came in second and third, respectively. The Egyptian scored 15,233 points, while Zhang scored 15,200 points and Dang 15,033 points.

Though the World Challenge Cup is a C category in world events, sports officials say Zahran’s gold medal is still an achievement, since it is one of the major events registered on the agenda of the FIG. The gold medal could be an incentive for Egyptian gymnasts to reach higher international levels. In the same year, Zahran won another gold medal in rings at the African Gymnastics Championships held in Algeria.

In 2017, Zahran took home a bronze medal, as he came third in rings at the Varna Challenge Cup, held from 1-3 September in Varna, Bulgaria. Zahran conducted one try, for which the judges gave him a difficulty rating of 6.200 and an execution of 8.3.00 He did not receive a penalty and was given a total score of 14.500. Zahran’s scores were a little bit lower than Ukraine’s Igo Radivilov and Austria’s Vinzenz Hock, who came first and second with total scores of 14.700 and 14.600, respectively.

In the 2018 International Gymnastics Federation World Challenge Cup held in Osijek, Croatia, the 28-year-old Egyptian won the bronze medal with a difficulty rating of 6.200, and was given a total score of 14.400.

World Cup to kick off with an Egyptian twist