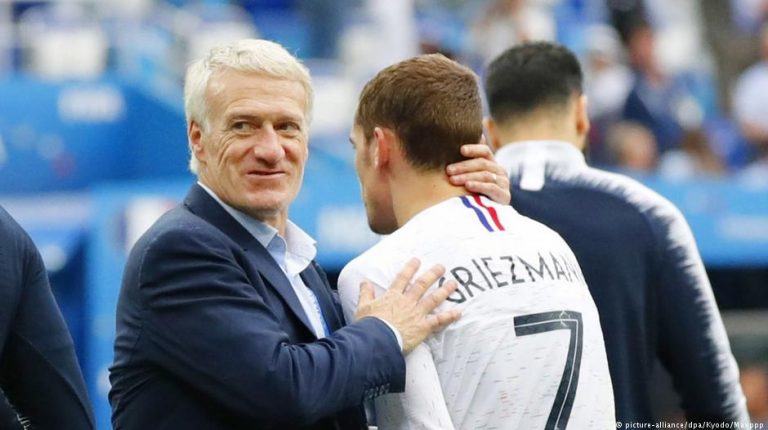 Didier Deschamps has an unparalled amount of talent at his disposal but the key to France’s success has been the realization that they don’t need all of it all of the time. A pragmatic approach is paying dividends.When Samuel Umtiti rose at the near post to glance home Antoine Griezmann’s corner and send France into a third World Cup final since 1998, he was continuing a trend which has come to characterize Russia 2018.

With 69 of the 158 goals scored so far in the tournament coming from dead balls, this has been the World Cup of set pieces. Cristiano Ronaldo got the ball rolling (or rather, not rolling) with his genius strike against Spain on day two, and Aleksandar Kolarov followed suit for Serbia against Costa Rica.

England head coach Gareth Southgate has explicitly highlighted the importance of dead ball situations in the Three Lions’ surprising success at this World Cup, as set-piece goals have helped England past Tunisia, Panama, Colombia and Sweden.

Why, even Germany (remember them?) enjoyed a short-lived moment of ecstasy thanks to Toni Kroos’ free-kick in Sochi.

But what made Umtiti’s header against Belgium so surprising was not that he’d managed to out-jump Marouane Fellaini, who is 12cm taller, but rather that a French team overflowing with creative, pacey, offensive talent were reliant on a set-piece goal at all.

“I would rather lose with this Belgian team that win with that French one,” said Eden Hazard, referring to the more pragmatic, defensive shape which France settled into in the second half. Speaking to Flemish-language daily Het Nieuwsblad, goalkeeper Thibaut Courtois called the French style “anti-football.”

No team at this World Cup has scored more goals than Belgium (14) and no team has a higher number of different goal scorers (nine) – but there was no way past the French barricades in Saint Petersburg on Tuesday night.

Blaise Matuidi and N’Golo Kante protected the back four admirably while Raphael Varane and Umtiti were rocks in defense. On the rare occasions the barricades were breached, Hugo Lloris was on hand to save from Toby Alderweireld in the first half and Axel Witsel in the second.

“We have to acknowledge how well they defended,” admitted Belgian coach Roberto Martinez. “We simply didn’t find enough magic in front of goal.”

There is no one way to win a football match. One of the keys to France’s success has been Didier Deschamps belated realization that, despite the calls from a French public desperate to see this talented generation click, he doesn’t necessarily always need all of the talent at his disposal.

In Saint Petersburg, just a sprinkling of Kylian Mbappe’s pace and Antoine Griezmann’s guile was required up front to get the job done. Ousmane Dembele, Thomas Lemar and Nabil Fekir remained on the bench. Karim Benzema, Alexandre Lacazette and Anthony Martial aren’t even in Russia.

“We had to be pragmatic,” explained 1998 World Cup winner Deschamps post-match. “The idea was to deny them space. We knew they can break like lightening, we saw it against Brazil.”

Deschamps’ thoughts will now turn to his second consecutive major international final as coach, where he will face one of two very different challenges from either Croatia or England. Like Belgium, Croatia have impressed with their attacking verve, scoring 10 goals so far with eight different goal scorers, whereas England have been reliant on Harry Kane for six of their 11 goals – so another pragmatic approach will be required.

After losing to Portugal on home soil two years ago at Euro 2016, Deschamps, the man known as the “Water Carrier” during his playing career has the chance to become only the third man to win the World Cup both as a player and a coach, after Brazil’s Mario Zagallo and Germany’s Franz Beckenbauer.

In July 1998, two Zinedine Zidane headers from corners against Brazil set Les Bleus on their way to World Cup glory, Deschamps hoisting the trophy as captain.

With a pragmatic approach, it would be little surprise to see them do it again in 2018 at the set piece World Cup.