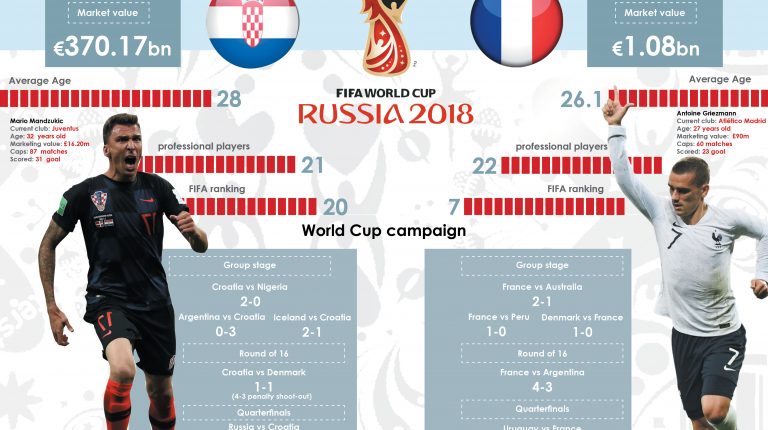 After beating Belgium on Sunday, France qualified for 2018 World Cup final and became one step away from winning their second title.

The Blues, under Didier Deschamps, overcame the Belgians thanks to wise tactics and collectivism in attack and defence throughout the tournament, that made France one of the strongest favourites for the World Cup title.

France’s qualification for the final game came after the surprising exit of major teams from the early stage of the World Cup, opening the door for lower ranked teams to go further in the tournament. Deschamps has built a team in his own image and they are a good bet to match his 1998 triumph on the expense of Brazil.

France reached the World Cup final for the third time in their history. In 1998, France defeated holders Brazil 3–0, with two goals from Zinedine Zidane and a stoppage time strike from Emmanuel Petit. The win gave France their first World Cup title, becoming the sixth national team after Uruguay, Italy, England, West Germany, and Argentina to win the tournament on their home soil.

In 2006, France lost 5–3 to Italy on penalty shootouts in the final match. It was also Italy’s first world title in 24 years, and their fourth overall, making them the second most successful World Cup team ever. The game witnessed controversy ensued near the end of extra time, when Zidane head-butted Marco Materazzi in the chest in an off-the-ball incident and was sent off.

France is the world’s top team in terms of marketing value, worth $1.362bn, and Deschamps has the highest salary among the World Cup coaches, recording €3.4m.

Opinion: Genius Kylian Mbappe is ready for the biggest stage of all