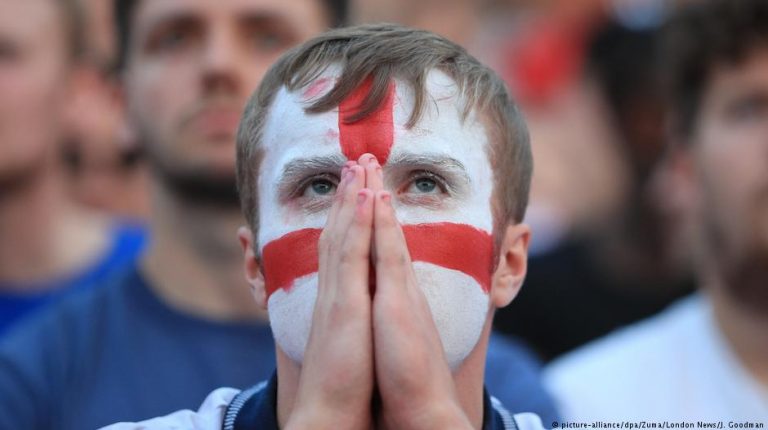 England’s dream of playing in the World Cup final has crumbled. Nevertheless, their tournament was a success. The team showed Germany how it’s done, writes DW’s Pascal Jochem.In the end, things were the same as they have always been and England were eliminated. Had the newfound strength of the Three Lions been nothing but an illusion? Had we been wrong? Not at all!

They fought through 120 energy-sapping minutes in the semifinal, but in the end, the Croatians got the job done in extra time. There is no shame in being eliminated in this manner, England can hold their heads high.

Even though football’s not “coming home” as England supporters had hoped, England are still winners. Of course, the disappointment is hard to take. This was clear for all in to see as a number of players collapsed on the pitch, tears rolling down their cheeks as they realized that they had missed their opportunity to play in the final. But this opportunity could return soon — like in Qatar in four years.

Real cohesion, enthusiasm and hunger; England displayed all of the sorts of qualities at this World Cup all that Germany lacked. Unlike Germany’s Joachim Löw, England coach Gareth Southgate delivered the right message, put together the right set of characters and put the focus of his work on team building.

The English have always had outstanding individual players, but this time they actually performed as a team. For these Three Lions, togetherness was not merely a hashtag dreamed up by marketing experts, as it was for Germany, the defending World Cup champions. When individuals didn’t have their best games, Southgate defended them in the face of media criticism, while in the case of the German FA (DFB) individual players are criticized by DFB officials and turned into scapegoats for the national team’s early exit.

England rode to the semifinals on a wave of euphoria, winning back many of their critics. This is also in part due to their new openness, as the players seemed more approachable and modest than members of past England teams. A whole country got behind these Three Lions. Social media were full of amusing videos of fans celebrating both their team and themselves.

The German team was the complete opposite of this England. All of the marketing hype and the Coca-Cola-sponsored national team fan club has been a bone of contention among true German football fans for some time. And quite apart from the results, the atmosphere surrounding the team at this World Cup was anything but good. Even after the last-minute win over Sweden (2-1), the hero, Toni Kroos couldn’t resist taking a dig at his critics.

Disappointments, chaos, and infighting rather than cooperation — this is what the English national team has been known for in the recent past. But at this World Cup, Germany and England reversed their customary roles.

Sure, England have again been denied a World Cup title. In Russia, the team wasn’t mature enough to achieve that. But England have a bright future ahead of them. Many key players are at or approaching their peaks: goalkeeper Jordan Pickford (24), central defenders John Stones (24) and Harry Maguire (25), creative midfielders Dele Alli (22) and Raheem Sterling (23) and captain and goal getter Harry Kane (24). The framework of a winning team is already in place, and in four years’ time, with more experience, England could be ready to achieve what they’ve set out to do.

As painful as it is now, there are positives to take from this defeat. England can learn from it and grow even stronger. After all, it took Germany several failed attempts before they reached their goal in Brazil in 2014. Twice prior to that, Löw’s men fell at the semifinal stage. That doesn’t have to be a bad thing. Chins up England!