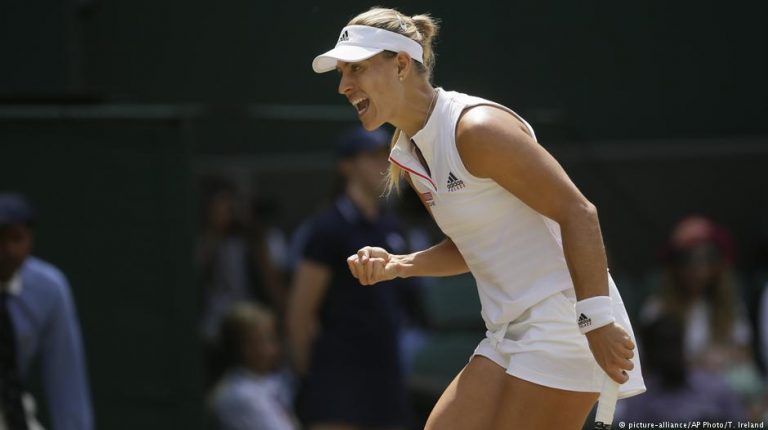 Williams got the better of Kerber in the 2016 Wimbledon finals, beating the German 7-5, 6-3 to earn her seventh Wimbledon title. Kerber has only defeated Williams twice in their previous nine meetings, one of which was in the 2016 Australian Open final.

Neither Kerber nor Williams, who were seeded 11th and 25th respectively for this year’s tournament, were odds-on favorites to reach the final. However, each of the top 10 seeds in the women’s bracket were eliminated by the fourth round.

Kerber, 30, used a seven game run to seize control of her match against Ostapenko. The 21-year-old Latvian, who was playing in her second Grand Slam semifinal, made 36 unforced errors, while the more experienced German made just seven.

“These are the matches I was working for as a young kid,” Kerber, 30, said afterwards, “and to stand here again in the final at Wimbledon is great.”

Kerber is coming off a down year in 2017. She quickly surrendered her world No. 1 status after a fourth-round exit at the Australian Open and was upset in the first round at the French Open and US Open.

But Kerber has progressed back to prominence in 2018. She reached the semifinals of the Australian Open before losing to eventual runner-up Simona Halep and reached the quarterfinals of the French Open, a tournament in which she has not performed well throughout her career.

Kerber could now become the first German women’s champion at Wimbledon since Steffi Graff in 1996.

Williams returned to action in March after missing over a year for her pregnancy — she gave birth to her Alexis Olympia Ohanian in November. But she needed just two major tournaments to return to her Grand Slam winning ways.

The American had no trouble handing the 29-year-old Görges, who was playing in her first Grand Slam semifinal. Williams smashed five aces past the German, converted four of her five break points and had only seven unforced errors.

“It’s crazy. I don’t even know how to feel. I didn’t expect to do this well in my fourth tournament back,” said Williams, who competed in the Indian Wells Masters, the Miami Open and the French Open before this year’s Wimbledon tournament.

“I had a really tough pregnancy delivery. I had to have multiple surgeries and almost didn’t make it to be honest,” Williams added. “I’m just enjoying every moment of this. This was not inevitable for me.”