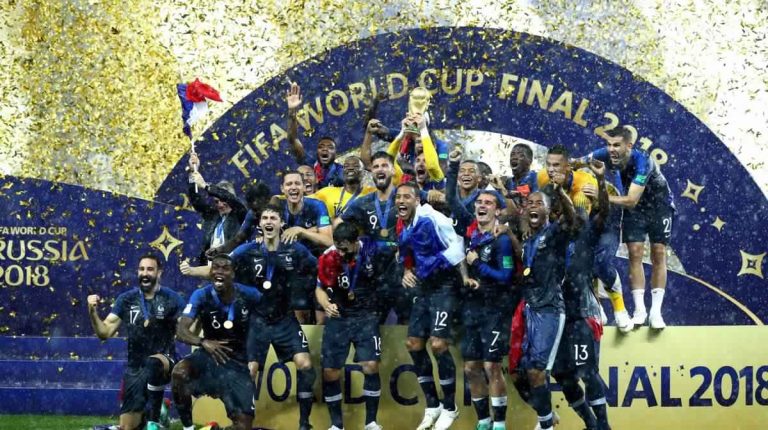 Overjoyed people took to the streets and squares of France as Didier Deschamps’ men sealed their country’s second World Cup triumph after a stunning 4-2 win over courageous Croatia in the final match. Scoring four times in the World Cup final, the French deserved to be crowned with their second trophy after 20 years. Deschamps joined the elite company of Mário  Zagallo and Franz Beckenbauer to win world cup as player and manager.

For Croatia, they can go home with their heads held high after presenting outstanding performance throughout their World Cup campaign that ended in qualifying for the final game for the first time. They dominated this match for long periods, putting France under immense pressure. France enjoyed a bit of luck, but were ultimately worthy winners. Deschamps gets the bumps from his players, Antoine Griezmann stands to one side weeping salty tears of joy, while other colleagues were overwhelmed with the indescribable feeling of making history in Moscow.

Meanwhile, Croatia’s captain Luka Modric was awarded the Golden Ball as the entire tournament’s best player after he helped Croatia to the World Cup final with his outstanding play in the middlefield, while France’s star Kylian Mbappe was named as the best young player at the tournament.

England’s striker Harry Kane won the Golden Boot award after topping the tournament’s goalscorers list with six goals in total. Belgium’s Thibaut Courtois won the Golden Glove for best goalkeeper. This tournament witnessed 169 goals, the second highest record across World Cup history, whereby many of which were scored from set-plays.

Les Bleus pragmatiques: How Didier Deschamps is getting the best from France

Opinion: Genius Kylian Mbappe is ready for the biggest stage of all