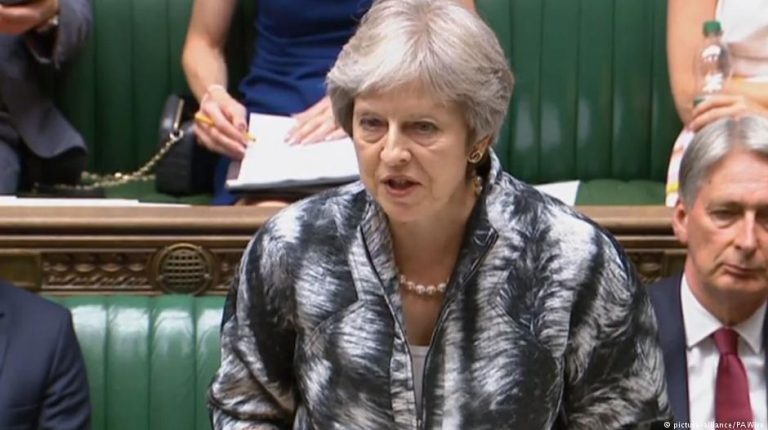 In an effort to ensure passage of a cross-border trade bill, Theresa May accepted amendments pushed by Brexiteers. The PM had earlier been seeking an arrangement that would maintain close ties to the EU.British Prime Minister Theresa May gave in to demands from her party’s hardliners on Monday, accepting their changes to her Brexit proposal. May acceded to eurosceptic amendments that sought to limit the government’s ability to set up customs arrangements with the EU.

The British leader had previously been pushing for the customs arrangements, which would keep close ties to Europe. But Monday’s developments exposed the pressures that May is facing as her conservative party is deeply divided on Brexit and lacks majority control in Parliament.

May’s capitulation came in the wake of the recent resignations by prominent cabinet members David Davis and former foreign secretary Boris Johnson and after she was blasted by a former cabinet minister who called for a new Brexit referendum on Monday.

A sacrifice for a legislative win

The prime minister accepted the amendments in an attempt to save a vote on the cross-border trade and taxation bill, which was headed for defeat. Now members are expected to approve the legislation later on Monday.

The amendments are being put forth by Conservatives from the European Research Group, a coalition of up to 60 right-wingers that are currently lobbying against a “soft” Brexit, who targeted the government’s customs legislation in an effort to move the needle towards their desired “hard” EU exit.

Downing Street defended the government’s decision to accept the four amendments, saying that it was still consistent with her white paper Brexit proposal.

Theresa May was criticized by the opposition and by members of her party who support a softer Brexit.

The British Prime minister defended herself in parliament against accusations that her Brexit plan was dead. “I would not have gone through all the work I did to ensure that we reached that agreement only to see it changed in some way through these bills,” May said.

“The only reason that the government has accepted these amendments is because it is frightened of somewhere in the region of 40 members of parliament, the hard no-deal Brexiteers, who should have been seen off a long time ago,” Soubry said, in reference to the European Research Group.

The battle over amendments to key Brexit legislation is likely to continue and that will be something May will have to contend with as she seeks a strategy for the UK’s future.