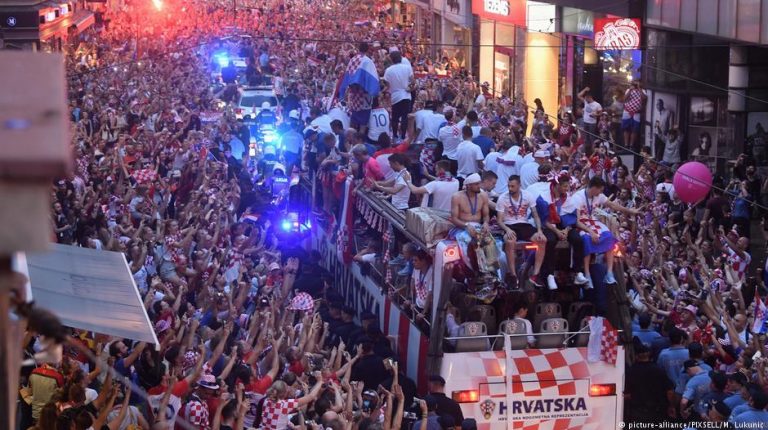 The streets of Zagreb have turned into a sea of red and white chequered colors. Celebration of Croatia’s World Cup success was expected to continue into the night.Hundreds of thousands of Croatians poured into the streets of the capital Zagreb on Monday to celebrate Croatia’s accomplishment in the World Cup in Russia. Although the soccer team lost 4-2 to France in the Moscow final, its success has been described as the biggest in Croatia’s sporting history.

A red carpet was rolled out for Croatia’s first national team to reach a World Cup final. They boarded an open-topped bus and headed towards the main square in Zagreb’s city center. The inscription at the front read, “Fiery heart, the pride of Croatia!” a reference to the name “The Fiery” as the team is known at home.

‘They lost the final but won the world’

Television coverage of the team’s return began as soon as the plane carrying the team from Moscow approached Zagreb airport. Croats were urged to come out and enjoy “the historic moment” of the players’ homecoming. National transport tickets were halved and public transport around the capital was free on Monday.

The Balkan nation of 4 million people surpassed the third place win at the 1998 World Cup in France. Croatia has been gripped in euphoria since its team beat England to reach its first World Cup final.

“Thank you, heroes! – You gave us everything!” read the Sportske Novosti frontpage.

A headline in the Jutarnji List newspaper read: “They lost the final, but won the world.”