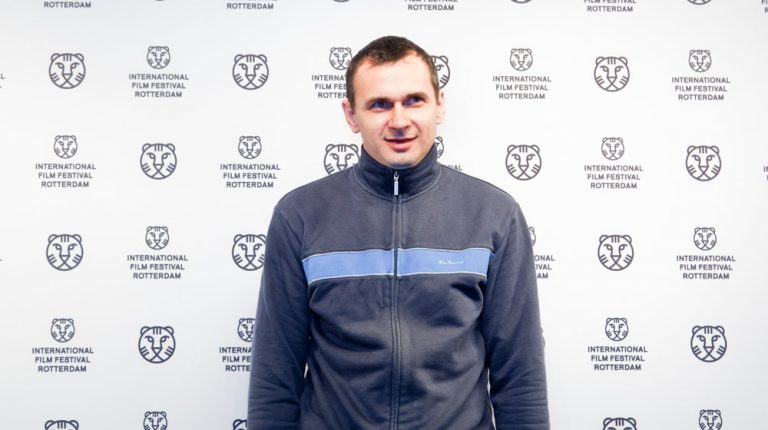 As the world celebrates the World Cup, Oleg Sentsov, a Ukrainian filmmaker, continues to serve a 20-year prison sentence, resulting from his 2015 conviction on charges of running “terrorist organisations” in Crimea.

Over two months ago, Sentsov declared a hunger strike, demanding Russian authorities to free all Ukrainian “political prisoners.” He has lost 15 kg since the beginning of his hunger strike. His action has sparked protest in his support across the globe. The voices of his supporters are mostly directed at Russia’s President Vladimir Putin, to remind him that Sentsov should never have spent a single day in prison and that his fight for justice should not be in vain, Amnesty International said.

The story of Sentsov started on the night of 10 May 2014, when members of the Russian Federal Security Service (FSB) arrested him at his home in Simferopol, the capital of Russian-occupied Crimea. According to Amnesty International, they put a plastic bag over his head and suffocated him until he passed out. They threatened him with rape and murder to force him to “confess” to organising bombings and other “terrorist acts,” as well as to possessing illegal firearms. Sentsov was able to see his lawyer only 17 days into his detention, when he was transferred from Simferopol to Moscow together with other suspects in his case.

“This was the beginning of an extremely cynical show trial,” Amnesty International said, adding that Sentsov’s relatives and lawyer believe he was detained for being a pro-Ukrainian activist who peacefully resisted the Russian occupation of Crimea.

Since then, Sentsov was transferred to several prisons in Russia. After several months in Labytnangi, Sentsov lost two teeth and has started losing his hair—the severe climate there is not suitable for Sentsov, according to his lawyer. On 13 July, he turned 42.

“Freedom would be the best—and the most deserved—gift for him,” Amnesty International said.

According to Russian government-affiliated media, the North Caucasus District Military Court sentenced him to 20 years behind bars on charges of setting up a terrorist cell in Crimea and plotting terror attacks. In the spring of 2014, the group’s members carried out two terror attacks in Simferopol, setting fire to the offices of Crimea’s Russian Community non-governmental organisation and a regional office of the United Russia party.

In a smuggled letter, Sentsov said that “for three years I’ve been sitting in a Russian prison. For those three years a war has been conducted against my country.” He added, “I want to remain just a surname on a list,” asking Ukrainian authorities not to falter against Russian demands. “We’re not your weak point. If we’re supposed to become nails in the coffin of a tyrant, I’d like to become one of those nails. Just know that this particular nail will not bend.”

His mother, Lyudmila Sentsova, has written a public appeal to Putin, which was published on Ekho Moskvy, asking the Russian president to pardon her son.

“It’s hard for me to judge my own son’s degree of guilt, but I know him as a peaceful citizen and a man devoted to his profession—filmmaking. I won’t convince you of Oleg’s innocence, though I believe in it myself. I’ll simply say that he didn’t kill anyone. He’s already served four years in prison. His children are waiting for him, and his youngest son suffers from autism. They’re worse off without him. They will never be happy without a father,” she wrote in the letter.

In response to these demands, Russian presidential spokesperson Dmitry Peskov said on Sunday that the Kremlin will consider a request by the mother of Sentsova to pardon him when it is received by the president’s executive office.

“Of course it will be considered, but I cannot say when exactly this will happen,” he said. Peskov added that the Kremlin learned about Lyudmila Sentsova’s request addressed to Putin from media reports.

Sentsov is the winner of the 2017 PEN/Barbey Freedom to Write Award. On 26 February 2018, the Day of Crimean Resistance to Russian Aggression, PEN America and a number of partners around the world expressed their support for Sentsov with a Day of Action comprised of readings, rallies, and special events across the globe.

Best known for his 2011 film “Gamer”, Sentsov lived in Crimea’s capital of Simferopol and was active in protests against then-President of Ukraine Viktor Yanukovych, who led a pro-Kremlin government before he was removed from office in February 2014. As Russia took control of Crimea in 2014, Sentsov became an outspoken critic of Putin’s disregard for the sovereignty of Ukraine and delivered food to Ukrainian soldiers blockaded in bases by Russian military.

PEN said in a statement that it believes that the charges stem from Sentsov’s political activities, most importantly his outspoken criticism of Russia’s annexation of Crimea, and has expressed concern about shortcomings in the judicial process that led to his sentencing.

Similarly, on the 57th day of Sentsov’s hunger strike, the International Film Festival Rotterdam (IFFR) urgently repeated its call for his release and safety. The festival said it will make his feature film debut, “Gamer” (2012), available to watch online via streaming platform IFFR Unleashed as an act of solidarity with Sentsov. “We sincerely hope that watching ‘Gamer’ will motivate people even more in their actions for Sentsov’s freedom,” IFFR said.

IFFR programmer Evgeny Gusyatinskiy said, “When we programmed Sentsov’s wonderful debut film in 2012, we knew he was a promising filmmaker who would have much more up his sleeve for the years to come. It’s a tragedy that things have turned out the way they have.” Meanwhile, festival director Bero Beyer said, “In order to raise awareness of Sentsov’s case once more and to enable people to get to know the excellent filmmaker behind the prisoner, we decided to upload ‘Gamer’ to IFFR Unleashed, our streaming platform. It’s the least we could do. Politically motivated injustice should not and will not silence independent filmmaking!”

“Gamer” had its world premiere at IFFR 2012 and is a realistic film about a teenager from a Ukrainian city striving to win a gaming tournament. His skills are promising, but the endless video games are getting in the way of his study at technical college, to the great dismay of his single mother.