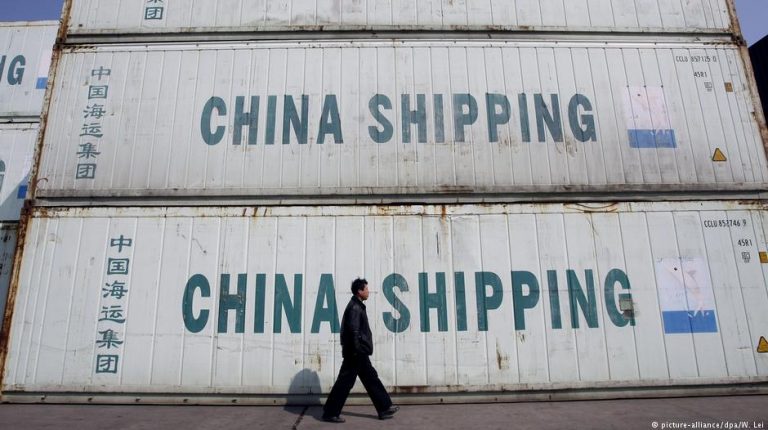 China’s economic growth slowed in the second quarter, adding to the many challenges Beijing faces amid a mounting tariff battle with Washington and weakened global demand for its exports.Chinese growth slowed slightly in the second quarter as the world’s number two economy faced a snowballing trade fight with the United States, after Washington and Beijing slapped new tariffs on $34 billion (€29 billion) of each others’ goods earlier this month, with threats of further tariffs on goods worth an additional $200 billion.

Despite this escalation, the Chinese economy expanded by 6.7 percent in the second quarter from a year ago. This is down from 6.8 percent in the first quarter, according to official figures released on Monday by the National Bureau of Statistics. Nonetheless, the growth was still higher than the government’s annual target of around 6.5 percent.

Data on Friday showed China’s exports grew at a solid pace in June, in the face of the mounting tensions, but analysts warned the numbers may have been inflated by exporters pushing out shipments early to beat the scheduled tariffs.

Read more: EU and China seek closer ties as US turns against trade

More worryingly, the trade surplus with the US hit a record high last month and looks set to keep the bitter tariff dispute simmering with Washington for a while longer.

There are, however, signs of a further slowdown. Investment in fixed assets continued to slump in the first six months of the year, slowing to 6 percent, down 1.5 percent from the first quarter and marking the slowest pace since data collection began in 1999.

Banks to the rescue

Even before the dispute with Washington erupted, forecasters expected growth to cool after Beijing started tightening controls on bank lending last year to rein in surging debt.

In June, the People’s Bank of China said it would reduce the reserve requirement ratio for most banks in an effort to free up funding for small firms.

Additionally, the nation’s financial regulator has told banks to “significantly cut” lending rates for small firms in the third quarter in comparison with the first quarter, two people with direct knowledge of the matter told Reuters last week.

The Chinese yuan, meanwhile, has been sliding, though ironically a weaker currency might in the end help exporters facing US tariffs.